I just finished watching the hilarious Slasher.com (or “S/ash.er,” as it’s expressed in the credits), which is a, um, slasher movie. Those aren’t usually funny, and this one probably didn’t set out to be comical in nature, but it is what it is: One of those elusive so-bad-it’s-good movies.

Slasher.com begins with some faux news coverage of a “slasher serial killer” who’s been knocking off women he meets online. Authorities are mystified! Don’t date online, they caution! Coverage ends, and we see a nice young man named Jack (Ben Kaplan, “The Sluagh”) about to go on a first date with Kristy (Morgan Carter), whom he — wait for it — met online. Kristy’s planned a weekend getaway in a cabin in the middle of the woods for the two of them, and if that doesn’t strike you as a weird thing to do on the very first date, then you might yourself be the slasher serial killer.

Anywho, the cabin is, as expected, isolated as can be. We know it’s isolated because the characters never seem to stop telling us how quiet and peaceful and away from all the hubbub of the big city this place is. Oh, and naturally neither of them get cell reception at this cozy hideaway. Nope, no red flags here for either of our nature-loving citizens!

They’re staying in a cabin run by the Myers family and are greeted at the door by Momma Myers (Jewel Shepard, “Caged Heat II: Stripped of Freedom”) herself. Momma seems a little off, wandering into the room with a bowl of what looks to be potato salad. And she sure does love her spoon! Soon, her husband Jesse (R.A. Mihailoff, “Small Town Saturday Night”) and daughter Caitlin (Rebecca Crowley) show up with machetes, seeing as how they’ve been whacking away at Mother Nature. Can’t let that old biddy encroach on their property, can we?

Kristy and Jack ensconce themselves in their cabin. They drink, they hike, they drink some more, they go skinny dipping, they eventually have sex, it’s all standard fare for slasher movies. And, since they’ve copulated, we all know what’s going to happen to them and what the Myers family is really all about, don’t we? Ain’t no surprise. Those machetes show up again. And Momma, who’s been creepily hospitable since her guests’ arrival, Jesse, and even Caitlin reveal themselves to be more than they first seemed.

Carter, playing damsel-in-distress Kristy, looks like Kerri Kenney (Deputy Wiegel from “Reno 911!: Miami”); Shepard, playing the licentious, lascivious Momma, looks like Carol Burnett. The similarities make for an interesting dynamic, although Slasher.com is essentially told from the point of view of Jack. None of the cast members really shines, although Shepard probably comes off the best. The problem is that the dialog is lifeless and delivered, almost universally, as if someone were in the wings feeding the actor line by line. I mean, the actor will speak a line, pause, then speak another one, pause, and so on. Guys, you can have more than one take if you want.

The plot itself does have its twists, but the first one is pretty ridiculous and the second one surpasses it. It felt to me like the writers had a vague idea of how the story was going to play out, and then someone got it in their head that it might all seem a little too familiar to the viewer, so they tossed in a couple of head fakes to spice things up. It doesn’t spice things up, but it does make things funnier.

And that’s the bottom line with this one. There’s a fair amount of blood and gore and violence (the title might be a giveaway), but Slasher.com is anything but a scary movie. They could have called this one “Don’t Go Into the Woods” or “The Cabin with the Homicidal Inkeeper” and be done with it. But Slasher.com is cheesy fun, I’ll grant it that much. Erase your mind, take some Ambien, and settle in. 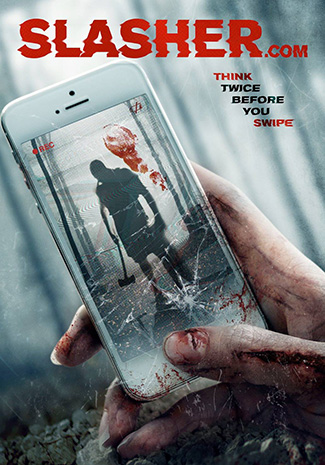