The Ottoman Lieutenant is a modest yet powerful film, one that sweeps the viewer into its world with majestic scope, while maintaining a keen eye for detail and never offering more than it can deliver. Romance, coming of age, duty and responsibility, violence and compassion, politics and history come together in an impressive whole, captured in gorgeous locations with stunning images.

The film focuses upon Lillie Rowe (Hera Hilmar, “Anna Karenina”), a young woman of high Philadelphia society in 1914. Lillie is dismissive of her parents’ insistence that she marry a wealthy, respectable man, and manifests her desire to make a positive contribution to the world by working as a nurse at a Philadelphia hospital. An early scene in this hospital establishes the prevalent tone of the film, as conscience rebels against societal mores. When a dashing young doctor Jude Gresham (Josh Hartnett, “30 Days of Night”) draws Lillie’s attention to a mission hospital in Anatolia, she resolves to bring a truck and medical supplies to this mission, even if she has to supervise it every step of the way. This proves difficult as war in Europe threatens to turn Anatolia into a combat zone, with relations between Armenian Christians and Turkish Muslims becoming hostile. Along the way, Lillie encounters the eponymous lieutenant, Ismail (Michiel Huisman, “The Age of Adaline”), and as their paths continue to cross, tensions both political and interpersonal start to rise.

In terms of setting and narrative, The Ottoman Lieutenant is reminiscent of Edward Zwick’s “Legends of the Fall” and James Kent’s “Testament of Youth.” Unlike those rather turgid films, however, director Joseph Ruben delivers a genuinely sweeping and involving drama, one that combines expansive visuals with intimate details, all of which draw the viewer into the characters’ world both internally and externally. From the immense landscapes that Lillie travels through to the cramped yet somehow welcoming surroundings of the hospital, where Jude cares for the sick and injured alongside cynical and overworked senior doctor Garrett Woodruff (Ben Kingsley, “The Walk”), Lillie’s journey is engaging and absorbing, romantic without being overly sentimental. Jeff Stockwell’s screenplay balances the different characters as well as supporting roles, including some well-detailed local people who are far from exoticized foreigners.

A key ingredient in the film’s enveloping power is the visuals. Ruben and director of photography Daniel Aranyó make great use of the Turkish landscape, as barren deserts betray a harsh beauty while rolling grasslands express the freedom that Lillie finds in her new surroundings. A lake and island appear in a couple of scenes, and these locations take on almost mystical qualities, where the dreamlike state of the characters seems entirely fitting. At several points, the palette shifts between color and monochrome, drawing attention to the historicity of this fictional story within recorded events. One irritating stylistic feature is an excessive number of fades to black, that interrupt the flow of the visual narrative when a cross fade would surely have communicated the transition. This is a minor quibble, however, as for the most part the technique of the film fits the material perfectly.

Production designer Luca Tranchino fills the hospital with character, from the simple chapel where Jude prays for guidance to Woodruff’s quarters where an ether kit sits beside the photo of his family. Within this enclosed yet warm environment, quiet interchanges between the three healers convey their outward idealism and their inner turmoil. The love triangle that develops may be obvious and narratively clichéd, but it is handled effectively and compellingly. Intimate scenes are touching and even stirring, and a palatable sense of pain and desire runs throughout the film.

Not that The Ottoman Lieutenant is limited to internal struggles, as Ruben also delivers some genuinely thrilling action sequences as the war creeps ever closer. Handheld cameras thrust the viewer into the combat zone as Ismail and his men encounter enemy troops and partisans. Nor does Ruben shy away from gore, as blood spurts both on the battlefield and in the hospital, while a couple of operating sequences are likely to induce winces. Like the recent “Hacksaw Ridge,” the violence is not gratuitous but appropriate to the setting, although the carnage is less emphasized than in Mel Gibson’s butchery fest.

Alongside the personal stories, the film encompasses the broader political context. The tension between Christians and Muslims gives the film contemporary resonance, and the variety of characters ensures that neither side are demonized or presented simplistically. Both sides perpetrate atrocities, and both sides are appalled by the actions of the other. As Russian forces draw ever closer, the larger events beyond the immediate surroundings loom over the hospital and the central characters but, again, commonality and similarity is emphasized rather than difference and dissent. While it might have been refreshing to have a Middle Eastern actor playing the role of Ismail (Huisman is Dutch), the centrality of this character and the interracial relationship between him and Lillie is a positive sight. Despite its backdrop of conflict and division, The Ottoman Lieutenant is a film about similarity and unity, themes that need a constant presence in contemporary discourse. Alongside this, it is an emotional and compelling story of a woman combining independence with responsibility, romance and career, a story told with epic sweep and lustrous vision. 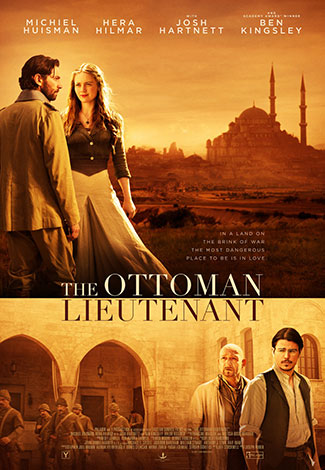