I want to know what these guys were smoking when they were writing the script for Superman Returns. So what was great about Superman Returns was the possibilities it could have taken with the script. After the beginning credits (which were a great homage to the 70s/80s version of Superman), the whole film went downhill fast.

The man who took this movie must be tried and convicted to the farthest reaches of space for having used such vast assortment of cliches to the point of embarrassment and undermining the franchise. The movie starts off with Superman (Brandon Routh) crash landing back into the Kent farm after a five year hiatus. He returns to Metropolis as a reporter at the infamous Daily Planet and hoping to patch things up with Lois Lane (Kate Bosworth). Except that someone should have told him that stranding a girl for five years doesn’t really cut it. She finds a new man (James Mardsen of recent “X-Men 3 – The Last Stand” fame) and has a son. Soon after, Superman has to show up to handle an out of control aircraft and save the day. And yet no one even thinks to suggest that Kent’s return and the Man of Steel around the same is just not coincidental and little too convenient (but then they are also fooled by a pair of glasses too). Lex Luthor (Kevin Spacey) isn’t too far behind, scheming to end Superman long before he actually returns. This time he goes to the source of his trouble to flush Superman out and destroy him.

By the time we get around to the third act, the plot is so thin, I wouldn’t breathe on it much less skate. The ending is a little too clean for my taste and there’s a heavy handed epilogue that promises even more fun with the next installment. But most importantly what really hits me hard is that Superman is supposed to be an action movie and not some soppy mushy romantic flick. The story is clunky and inherently uninteresting, thanks peeping tom using his super powers to eavesdrop.

The only thing worth mentioning in this movie is Kevin Spacey being Spacey. He essentially tries re-doing the Gene Hackman interpretation from the old movies but goes a tad more darker and serious. The pace of this movie is from flat to none for most parts. Superman Returns flies but does not soar. This movie has great potential but with no energy, fewer emotional scenes and stronger action would truly make this worthy some day. 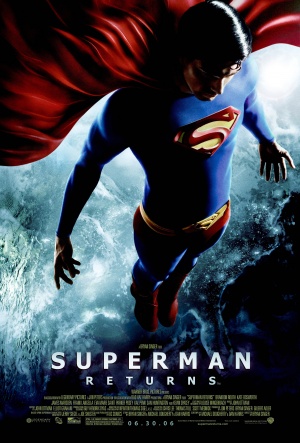