Lew Ayres, who starred in the classic 1931 anti-war film (and Best Picture Academy Award winner), “All Quiet on the Western Front,” was so affected by that movie, he became a conscientious objector and served as a medic in World War II (and was later to earn a Best Actor nomination for “Johnny Belinda”). Others went the same route, but few know their story.

Now, after a decade of exile and ostracization (for saying extremely stupid things when he was drunk — gee, NO ONE has ever done THAT before, right Alec Baldwin?!), Mel Gibson is back in the director’s chair with Hacksaw Ridge, the story of another person who was on the outside most of his life (albeit for being religious, not an inebriate), Desmond T. Doss, a medic in the Japanese Theater and the first conscientious objector to win the Congressional Medal of Honor for saving more than 70 fellow soldiers on Hacksaw Ridge on the island of Okinawa during the waning years of that campaign in 1945.

The script is by Andrew Knight (“The Water Diviner”) and Robert Schenkkan (“The Quiet American”) and it is truly one of the more intense, disturbing and emotional films you will most likely ever see.

First things first, however. We’re introduced to Doss (Andrew Garfield, “The Amazing Spider-Man”) as a youngster (Darcy Bryce) fighting with his older brother and trying to tolerate his alcoholic father (Hugo Weaving, “The Lord of the Rings” and “The Matrix” franchises) and protect his put-upon mother (Rachel Griffiths, “Saving Mr. Banks”). Shy and awkward, he meets a pretty nurse, Dorothy Schutte (Teresa Palmer, “Lights Out”) and charms her with his back-country simplicity. Meanwhile, after an incident where he clubs his sibling with a brick (and later forcibly removes a pistol from his drunken dad during a domestic violence episode), he vows never to touch a weapon again.

This vow comes back to haunt him after he enlists and arrives at boot camp. Here we get the stock military initiation clichés (the oil-water mix of personalities, the gruff drill sergeant — in this case, Vince Vaughn playing against type — training scenes, fighting-to-prove-you’re-a-man sequences and even a recruit name “Tex”) It’s all there. Also included is a pact between Sergeant Harry Howell (Vaughn, “Delivery Man”) and platoon leader Captain Glover (Sam Worthington, “Wrath of the Titans”) to get the pacifist kicked out of the Army. He refuses to bend, gets beaten up, put on garbage duty and incurs the wrath of his commanding officers (think of the plotline from “From Here to Eternity”). Doss is also a Seventh-day Adventist AND a vegetarian, for those who already cannot stand him.

On the verge of being found guilty by a court-martial and imprisoned, his father sobers up, dons his old, moth-eaten uniform from the Great War (what people called WWI BEFORE WWII) and appeals to an old commander for clemency for his boy.

After this sentimentality, and a near detour into Nicholas Sparks’ territory, Doss and company arrive in Okinawa to see the devastation of that occupied strip of land (more than 15,000 Americans would eventually perish there, as well as 100,000 Okinawans and Japanese). One of the last in a chain of islands hopped by Allied forces (mostly American Marines and infantry) and a proposed launchpad for an invasion of the Japanese mainland, it was a strategic hallmark of the goal to end the conflagration that had begin in 1941 for the U.S. (and much earlier for the other victims of the Empire of Japan’s naked aggression).

It’s here, however, that Gibson seems to have a “Braveheart” (the controversial 1995 Best Picture recipient, although I would have voted for “Apollo 13” or “Babe” instead) flashback, with scenes of such graphic violence and over-the-top gore that Quentin Tarantino would be green with envy. And while the thought of honoring a man of non-violence caught in the middle of such carnage is most likely Gibson’s point, showcasing such horror and chaos only to make Doss’ character shine through even more (as in his other controversial endeavor, 2004’s “The Passion of the Christ,” which spared nothing in exhibiting the Savior’s literal suffering for our sins). Then again, even modern filmmakers cannot gloss over this area of the global conflict without showing just how awful the fighting was and just what a terribly determined and cruel the Imperial Japanese soldier was at that time.

When such overwhelming darkness threatens to overwhelm our latter-day senses, though, we are treated to an even more powerful emotional experience from this story. It was a similar tale that Clint Eastwood told with much success in “Letters from Iwo Jima,” but much less in “Flags of Our Fathers.”

While watching, I often thought of my own father, who at just 19, participated in the Italian campaign from 1943-45 and remained scarred by those memories for the rest of his life. As a veteran myself, I could not view Hacksaw Ridge without a thought to our current crop of young men and women in the military who will probably never receive the recognition for which they so richly deserve.

Finally, a look at the real life Desmond Doss (with photos, archival newsreel footage and even a 2003 interview) bring the picture to its conclusion. Anyone who can truly sit through it without a lump in the throat or a tear in the eye either has no heart or is a jaded professional film critic. In fact, there’s no doubt many smug, self-styled writers will probably use this an another excuse to bash Gibson for his past transgressions as opposed to a publishing a serious critique, but be that as it may.

Playing the lead character with an “aw shucks” attitude and with quiet grace and a dignified manner, culminating in a determination unmatched by most heroes, Garfield (whom many thought should have been given an Oscar nod for “The Social Network”) is the perfect holy fool, while Weaving earns kudos as the bitter sot who disdains his sons for joining the military, even though he served in World War I (losing his best friends in the process).

And, in any other year for any other director, I would say these are definitely award-worthy performances (along with cinematographer Simon Duggan, “The Great Gatsby”), but it is difficult to tell if Gibson’s sins are truly forgiven or simply temporarily forgotten. Time will tell. For this reporter, however, Hacksaw Ridge is the best war movie he has seen in many years and certainly the top production, so far, for 2016. 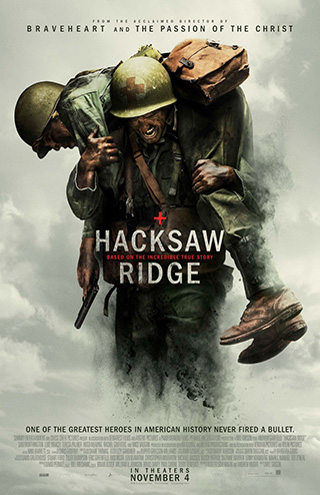