The latest entry in the Marvel Cinematic Universe (MCU) is a curious film of links. There are links between its world and the wider MCU. The central premise depends on links between different dimensions, from which sorcerers draw and utilize mystical energy. And it manages the tricky task of forging links between magic and science, an expository device that could easily be clunky and unconvincing.

In each case, the links are effective and add heft to the drama. The links between Doctor Strange and other events within the MCU are clear without being over-determined: Stark Tower appears in aerial shots of New York, the Avengers are mentioned in dialogue and there is one delightful cameo. This restraint and focus on the current text allows the world of Doctor Strange to be convincingly fleshed out, which is necessary as it requires a lot of world-building. Director Scott Derrickson (“Sinister”) establishes this world from the opening set piece, which introduces the hidden power struggles of various sorcerers and their remarkable abilities. It is an attention-grabbing sequence with some genuinely jaw-dropping moments that establishes the rules and draws the viewer in. Nor does Derrickson stop there, as the rest of the film progresses with similar confidence and aplomb. Key to this is the convincing and effective scientific explanation for magic, as explained by supreme sorcerer the Ancient One (Tilda Swinton, “We Need to Talk About Kevin”) to the desperate, but skeptical, Stephen Strange (Benedict Cumberbatch, “The Imitation Game”). The premise is straightforward enough to support the narrative, but requires a leap of faith both on the part of Strange and the viewer, and this ensures that the internal conflict is as prominent as the external one.

The external conflicts themselves are truly dazzling, as Derrickson and his director of photography Ben Davis’ fluid camerawork make the film feel like “Inception” crossed with “The Matrix,” enhanced with “Harry Potter” and then amped up to “Are You Nuts?!” This mobile aesthetic mirrors the shifting reality of the film world, creating a genuinely thrilling and at times trippy experience. Rather than a multitude of flashing lights and pyrotechnics, the film’s visual display is more a matter of fracturing and indeed fractal displays. Flashy magical effects largely appear as portals in space and circles and spheres around hands and arms, while around the sorcerers, buildings fold in upon themselves, centers of gravity rotate and objects assumed to be solid rearrange and reconfigure.

Within this shifting yet never chaotic environment, a varied group of characters are brought to life by a fine cast of largely British actors. Cumberbatch is excellent in the title role, an arrogant, self-righteous, narcissistic neurosurgeon whose world collapses after an accident robs him of his digits’ dexterity. Strange’s journey is therefore one of both self-healing and self-discovery, as he learns humility as well as the possibilities beyond his own perceptions. Once again, the viewer is treated to this journey of discovery as well, such as when the Ancient One first introduces Strange to the wider dimensions. But Strange proves to have additional layers, especially in a crucial scene when he performs an act that he finds abhorrent. Strange also maintains a sense of humor throughout proceedings, the script by Derrickson along with Jon Spaihts and C. Robert Cargill allowing many witty zingers and jokes both verbal and physical (including some great moments involving an opinionated item of clothing).

A further source of wit is the Ancient One, about whom there has been some controversy over the character being whitewashed. It is worth considering, however, that an Asian mystic character might have been a target for accusations of stereotyping. Swinton’s character is explained as Celtic and one in a long line of supreme sorcerers, her power and seniority not linked directly to her race. Swinton plays this role of wisdom, immense power and knowledge with the right balance of gravity and levity, so the viewer — much like Strange — believes in her even if we don’t entirely trust her. Filling out the cast further are Chiwetel Ejiofor (“The Martian”) as Mordo and Benedict Wong (“Prometheus”) as Wong, experienced wizards who both have important lessons to teach Strange. Pleasingly, this racially diverse cast do not fall into a crass organization of white leader with black and Asian sidekicks, as several sequences feature these various wizards fighting side by side as equals, even if Strange gets to hog the climax.

Marvel has a history of constructing convincingly flawed and troubled heroes but under-serving the villains, who, with the exception of Loki (Tom Hiddleston) in “Thor,” “The Avengers” and “Thor: The Dark World” and the Red Skull (Hugo Weaving) in “Captain America: The First Avenger,” are generally forgettable. Kaecilius (Mads Mikkelsen, “Men & Chicken”), however, is a great combination of ambition, fanatical belief and betrayal. Every time Kaecilius comes on screen, his presence is mesmerizing, both in terms of his magical abilities and his commanding demeanor. In a central scene, he ensnares Strange with melodious words, the camera resting on his face while tears run down his cheeks, such is his passion. Small wonder that his zealots follow him with such devotion, or that Strange questions what he has been told.

The only significant fly in this magical ointment is Rachel McAdams (“Spotlight”) as Strange’s former lover Christine Palmer. It’s not McAdams’ fault — she imbues every scene that she is in with pathos and compassion, but the script doesn’t give her enough to be beyond something Strange has left behind. There are a couple of scenes between them that give the film a touch of melancholia, but the character is ultimately undernourished and either needed to be further developed or left out entirely. That said, in one bravura sequence Palmer does serve as an anchor for the audience, while a truly bizarre contest rages around her on another plane of existence.

Overall though, the confident world-building, strong storytelling, winning wit and stunning visuals link together to form an engaging and enthralling film. Marvel have long combined the superhero genre with others, whether it be superhero/heist film in “Ant-Man,” superhero/period war film in “Captain America: The First Avenger” or superhero/space opera in “Guardians of the Galaxy.” Doctor Strange is superhero plus magical fantasy, and for the MCU to take this new direction with only passing links to what has come before displays the studio’s confidence in its product. Such confidence is warranted as, after the somewhat bloated “Captain America: Civil War”, Doctor Strange reminds us of the focus that Marvel can bring to the table, with a gorgeously realized, skillfully plotted and thoroughly spellbinding adventure. 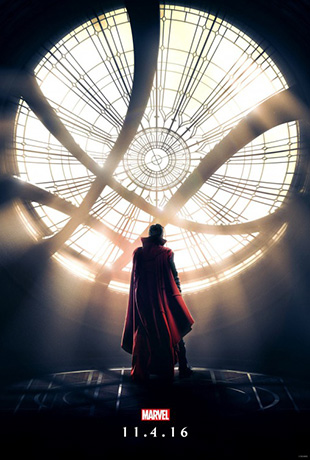