Mathematician and cryptographer Alan Turing experiences both triumph and tragedy in Norwegian director Morton Tydlum’s The Imitation Game, the true story of a man whose help in breaking the Nazi’s Enigma Code during World War II may have brought the war to an earlier end. Lauded by Winston Churchill as being the man who made the greatest single contribution to the war effort, the film is both a celebration of Turing’s life and an infuriating look at the circumstances that turned him from a hero into a pariah. Based on the book Alan Turing: The Enigma by Andrew Hodges with a screenplay by Graham Moore and a haunting score by Alexandre Desplat, the film unfolds as both a biography and an intriguing adventure story with key moments in his life depicted in flashbacks.

Shown are Turing’s troubling days in boarding school, his time working for the British government at Bletchley Park during World War II as part of a team of code breakers, and the post-war years when Turing, a gay man, was investigated for what was then the crime of “gross indecency” by the police. Most of the film deals, however, with Turing’s uphill struggle to break the Enigma Code with altering ups and downs of excitement and disappointment. As brilliantly portrayed by Benedict Cumberbatch (“The Hobbit: The Desolation of Smaug”) who brings richness and complexity to the role, Turing is a brilliant but highly eccentric individual whose aloof personality is off-putting to his superiors and his co-workers.

These include chess champion Hugh Alexander (Matthew Goode), John Cairncross (Allen Leech), and Peter Hilton (Matthew Beard) as the team members. Only Joan Clarke (Keira Knightley, “Anna Karenina”), whom Turing chooses by placing an ad in the newspapers, and Stewart Menzies (Mark Strong, “Anna”), a high-level Intelligence operative, see Turing in a positive light with Knightley brightening up the film considerably with her warmth and general cheerfulness. Exasperated by the slowness of the effort to break the case, the military commander in charge of the operation (Charles Dance) is anxious to fire him. It is only when after Turing gets the go ahead from Churchill that he is provided funding for the machine he needs and is placed in charge of the project.

We do not find out why he names the machine “Christopher” until the film, in one of its best and most affecting sequences, revisits his days at boarding school in the 1920s. Bullied by his peers, the teenage Turing (Alex Lawther) develops a supportive relationship with classmate Christopher (Jack Bannon), also a brilliant mathematics student. Their close friendship is handled with exquisite sensitivity by Tydlum and the depiction of its ending is truly heartbreaking. After months of frustration and disappointment, the exhilaration is palpable when a breakthrough is achieved, but the celebration is short-lived when it is realized that it is necessary to be very selective in how they use the information in order to prevent the Germans from switching to a different code.

Sadly, in that process, they have to choose who lives and who dies, and the brother of Peter, the youngest member of the team, is one of those sacrificed. The final segment of the film returns to the police interrogation where Turing reveals to policeman (Rory Kinnear) his participation in the wartime effort which was classified for fifty years and asks him whether he is a war hero or a criminal. The response does not bring credit on the police, the law that was enforced, or the British government. Although Turing was awarded the Order of the British Empire for his services in 1945 and was officially pardoned by Queen Elizabeth in 2013, The Imitation Game convincingly makes clear that an unjust law not only destroyed one of the best minds of the century, but damaged all of us. 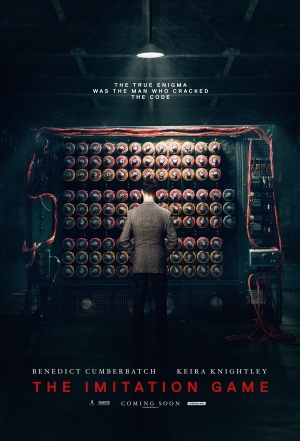