The Girl on the Roof, Skeet Ulrich’s directorial debut, is perhaps better when viewed as such than as a short film overall. Telling the dark story of a young girl, Lila (Naiia Ulrich), who receives only negative attention from bullies at school and hardly any attention from her family at home, which consists of a famous mother (Susan May Pratt), deadbeat step-dad (Todd Lowe), and her mother’s ostensible assistant, Lucy (Amelia Jackson-Gray, who also wrote the screenplay), this short film is intriguing, emotional, and not entirely predictable. After being knocked to the ground by bullies, Lila returns home to see her mother leave, her step dad drink, her mother’s assistant flirt with him, and, while writing and hiding on the roof of her house, a thief (Lennie James) breaks into her neighbor’s home and catch a glimpse of her on his way out. While many of its elements recall techniques that have been successful in other cerebral, suspenseful films, The Girl on the Roof probably needed additional tactics in order to present its narrative more coherently.

That said, some of the cinematographic choices made, especially toward the beginning of the film, work splendidly. In particular, the decision to begin The Girl on the Roof with a tracking shot that follows its main character, Lila as she walks through the halls of her school, firmly cements her as the character from whose point of view the story will be told. Same goes for the next shot, in which Lila is accosted by bullies who corral her behind a wall. As they continue to torment her, and she goes down and hits her head, the camera slowly pans to the other side of the wall, suggesting that, once we see her again, something about her perception of reality might have changed.

Many movies in which the plausibility of “reality” as depicted by the film is challenged or circumvented by means of point of view have been immensely successful; “Martha Marcy May Marlene,” “Black Swan,” and this year’s “Birdman” are a few examples that immediately come to mind. When viewed this way, some of the aspects of The Girl on the Roof that would otherwise seem strange (some instances of overacting and characters like the relentlessly shrill and distant mother and inexplicably furious and insistent sheriff) make more sense. They’re easier to buy, as a viewer, as the perceptions or concussive delusions of a troubled and lonely young girl than as characters or people in their own right. This is especially true of the scene in which the thief scales the roof of Lila’s house to convince her not to jump and they seem to spontaneously share intimate details of their lives.

The Girl on the Roof is definitely a good first effort, and an enjoyable watch, in somewhat the same mood as thrillers like “Hard Candy” and “The Host” are. If this is Ulrich’s first stab at filmmaking (“Scream” pun fully intended), then I’m excited to see what he’ll come up with next. 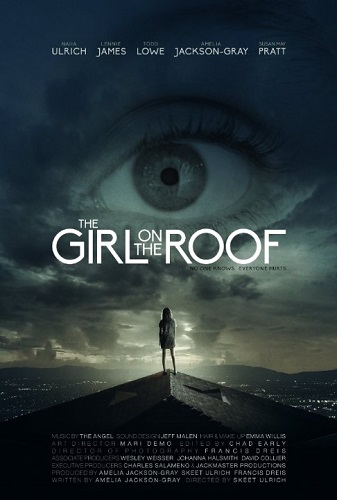