In 2003 Brian Douglas Wells, a high school dropout, pizza deliveryman, and “valued employee” of the Mama Mia Pizzeria, was double-crossed by Marjorie Diehl-Armstrong and Kenneth Barnes, his co-conspirators in a botched robbery plot. On the afternoon of August 28th, at the end of a dirt road, the crooks fastened a time bomb to Wells’ neck. He was under the impression that this was a decoy meant to distract authorities if he was captured (they’d already concocted a story about how “three black men” forced the bomb on Wells and held him hostage). But he quickly realized this wasn’t the case and with a real, ticking collar bomb and loaded shotgun, he raided a local bank demanding $250,000. Ultimately, Diehl-Armstrong detonated the device (video of the event was broadcast on television outlets and later found itself on the internet).

The incident wasn’t, in the least bit, funny but it inspired Ruben Fleischer’s (“Zombieland“) new action-comedy, 30 Minutes or Less. It stars Jesse Eisenberg as, Nick, a pizza delivery boy who hates his job, and spends time outside of work, drinking, watching movies, and talking to Kate (Dilshad Vadsaria), a former spark and his best friend, Chet’s (Aziz Ansari) twin-sister. It also stars Danny McBride as, Dwayne, a distinguished man-child who plans on hiring a hitman to kill “The Major” (Fred Ward), his disgruntled ex-Marine, turned lottery winner father. Sick of cleaning his dad’s pool for a meager $10-an-hour, he works under the guidance of a stripper named “Juicy” (Bianca Kajlich) and his best-friend, Travis (Nick Swardson). Only problem? The hit’ll cost $100,000.

Here’s where Nick comes into play. Minutes before getting off work, he’s assigned to one last delivery. When he arrives, at a secluded warehouse, the 25-year-old quickly dismisses Dwayne and Travis as stoners. Lo and behold, they kidnap him; Nick wakes up, an explosive bulging atop his Vito’s Pizzeria uniform, to the news that he has ten hours to rob a bank, drop the money off, and enter a code to stop the bomb’s timer. Desperate for help, he enlists Chet, a substitute teacher who’s finally found a full-time job and the one responsible for the divorce of Nick’s parents. However, much like chain store pizza, you’ll either love 30 Minutes or Less or hate it.

Unlike “Zombieland,” which also had Eisenberg in the lead, 30 Minutes or Less has serious pacing issues. The screenwriters, Michael Diliberti and Matthew Sullivan, take too much time in the film’s first act setting up a potential romance between Kate and Nick that, in the end, doesn’t evolve into a meaningful relationship (it actually becomes a rather dull plot point). Also, as far as writing is concerned, it’s much raunchier than Fleischer’s debut. For better or worse, this film is jam-packed with expletives, sexual references, and bare breasts and this red band approach to humor is hit-or-miss; it results in a few laugh-out-loud moments but the more offensive jabs oftentimes feel like smoke-and-mirrors for the pair’s lack of expertise.

As for Eisenberg’s involvement, it is a step backward from his performance in last year’s, “The Social Network.” His work here retains the trademark sharpshooting delivery he’s perfected, but it shows little effort. McBride’s routine, too, has grown tiresome (“Your Highness” saw to that).

Fortunately, Ansari is a likeable sidekick that benefits from a few surprise winners, including Ward, whose vulgarisms never get old, and Michael Peà±a’s hilarious turn as Chango (a.k.a. “Sugarmilk”), the professional assassin hired by Dwayne.

However, the real stars are Nathan Barr, who is responsible for the soundtrack, and Jess Hall, the cinematographer. Together, they bring a lot of energy to 30 Minutes or Less. Dwayne’s Metallica shirt sets the tone for the film’s score — raw, guitar-driven symphonies with bustling drums in the backdrop. These riffs bring an excitement that compliment Hall’s quick and effective shots (which are sure to add a few extra hairs on your chest).

Nevertheless, this actioner is an under-seasoned slice of summer entertainment. 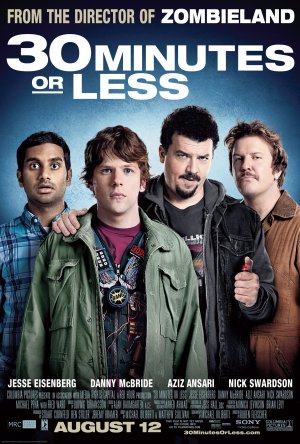