When was the last time you remember seeing a genuinely good shark movie? Steven Spielberg’s Jaws from 1975 is likely the most popular choice, and it’s perhaps the only good shark film in existence. In subsequent years, a few subpar Jaws sequels entered cinemas along with films like Deep Blue Sea, and then a few years later we began seeing a glut of awful, low-budget, straight-to-DVD shark features (Shark Attack 3: Megalodon, anybody?). Thank goodness, then, for 2010’s The Reef; an incredibly intense Australian thriller from writer-director Andrew Traucki, who was last seen at the helm of the similarly-themed Black Water back in 2007 (a crocodile flick). Traucki has visibly improved his cinematic technique since his 2007 feature debut, most notably in terms of staging visceral attacks and in his ability to build tension. Consequently, The Reef is a competently-crafted thriller machine that’s worthy of Spielberg’s Jaws. Those who complained that 2004’s Open Water — a similar vérité-style thriller— was too boring or low on shark action should find this movie to be a far more satisfying experience.

The story kicks off at an airport in north Queensland, where boat peddler Luke (Walshe-Howling) meets his old friend Matt (Grantley) along with Matt’s girlfriend Suzie (Pickering) and Matt’s sister Kate (Naylor). Luke and sailing partner Warren (Darcy-Smith) are scheduled to deliver a yacht, and have invited the three guests along for the trip. Setting off into the crystalline waters of the Great Barrier Reef, the idyllic jaunt is going famously for the group until the boat capsizes when it suffers severe keel damage. Drifting further out to sea thanks to a powerful current, the quintet find themselves faced with an unattractive decision: to wait adrift atop their sinking vessel with little food, water or chance of being rescued, or swim in shark-infested waters for the closest land formation. Soon, their greatest fear is realized: A large great white shark begins stalking the group.

Within the slimmest and most straightforward of narratives, writer-director Traucki managed to skillfully transform a standard plight into an effective, terrifyingly unpredictable shark thriller. Initially, Traucki opted to focus on exposition, character development and dramatic growth to allow for viewers to become acquainted with the cast before they’re plunged into mortal terror. To the credit of the writer-director, Traucki has a palpable talent for tight pacing and tension-building. Due to this, there are no dead spots — not even during the character building. The primary source of tension is the film’s unpredictability. From the get-go, you cannot tell when the shark will initially strike, leading to periods of unbearable tension. The shark can strike at any time and from any angle, as the protagonists are frequently vulnerable. Added to this, The Reef at no point succumbs to dumb clichés. The characters are not archetypes — instead, they’re just regular Aussies. More importantly, Traucki chose not to force a ridiculous climax pitting the characters against the antagonistic white pointer — instead, the shark strikes, devours its prey, and disappears into the deep blue sea.

Belying its $3.5 million budget with lavish underwater photography and seamless special effects, The Reef is a more polished effort than Traucki’s Black Water, yet it’s imbued with a gritty realism rarely seen in creature features. Like Black Water, the great white shark in The Reef is a genuine white pointer. The filmmakers photographed real great white sharks rather than utilizing digital effects, and as a result the shark never looks phony at any point. However, this does not mean the shark footage was haphazardly edited into the film, as we actually see the actors with the fish (one assumes there was a team of stuntmen in the water with the shark, or the shark footage was expertly grafted onto footage of the actors). The attacks, meanwhile, are haunting and visceral; they are the best shark attacks ever seen in a motion picture to date. The Reef additionally benefits from the score by Rafeal May, which further amplifies the tension at critical moments and triggers a few bonus scares. It is the most effective edge-of-your seat thriller of recent years. When you’re not on the edge of your seat, you’ll be chewing your fingernails to the bone.

Generally, thrillers and horror movies are far more terrifying if they are credible and easy to relate to. In the case of The Reef, all of the narrative machinations are believable, despite what some may believe. The notion of a shark stalking a party of humans may seem far-fetched but is not unheard of — the movie is in fact based on true events whereby a boat sunk in the Great Barrier Reef and the people aboard tried to swim to shore while a tiger shark stalked them. Also, great white sharks do indeed frequent the waters of the Great Barrier Reef, contrary to what some people may think. Meanwhile, the notion of a boat capsizing and/or sinking in the middle of the ocean is equally credible, and therefore incredibly terrifying. It’s easy to put yourself in the shoes of the characters and ask yourself what you would do in such an unnerving situation.

Yet another of the movie’s strengths is the actors, all of whom placed forth compelling portrayals of their respective roles and created distinctive characters. Headlining the movie is Damian Walshe-Howling, who was previously seen in 2006’s Macbeth and the acclaimed television series Underbelly. As Luke, Walshe-Howling is an excellent hero who ticks all the boxes: He’s charismatic, he’s commanding, and he’s a great leader. Alongside him is Gyton Grantley, who was also featured in Underbelly and Balibo. Like his co-stars, Grantley is infinitely likable, and it’s possible to care about his fate once the shark enters the picture. As the females of the picture, Adrienne Pickering and Zoe Naylor are both effortlessly charming, while Kieran Darcy-Smith (The Square) holds his own in the more minor supporting role of Warren.

Admittedly, The Reef is not perfect — a few clumsy lines mire an otherwise top-notch script (such as a corny “I love you” exchange), and there’s a head-scratching plot hole (the yacht was towing a dinghy, yet it disappears once the boat is capsized). Nevertheless, this is the shark thriller that cinema fans have been anticipating for years. It’s low-budget, sure, but the special effects are head over heels superior to other, more generously-budgeted shark features (see Deep Blue Sea or the Jaws sequels). Writer-director Traucki’s masterful manipulation of tension levels also ensure that viewers may again be hesitant to partake in a prolonged ocean swim. 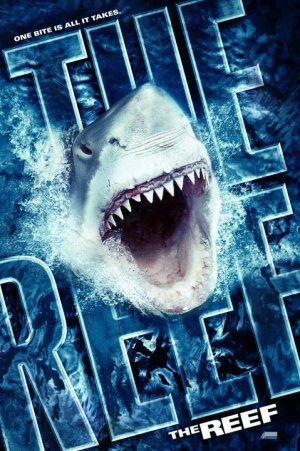