Shot and produced by photographer Tim Hetherington and journalist Sebastian Junger, Restrepo is one of the most powerful filmic examinations of modern warfare. While embedded in Afghanistan for 15 months throughout 2007 and 2008 (on and off) for a Vanity Fair assignment, Hetherington and Junger shot approximately 150 hours of video footage which was ultimately carved into this harrowing 90-minute documentary vacation into hell. Neither Hetherington nor Junger had worked in movies prior to Restrepo, yet their efforts are as rousingly cinematic as any action movie from 2010. Crucially, the pair had no axe to grind, no thesis to advance, and no political agenda — they simply aimed to document soldiers’ lives in a war zone, providing movie-goers with an immersive experience to allow them to feel what it’s like to be a soldier: To take and return fire, to patrol dangerous terrain, to deal with the loss of comrades, to live under harsh conditions, and to amuse one another during the rare moments when they’re not living in fear. There are no politics here — just pure experience; capturing the raw commotion of military campaigns from a soldier’s perspective.

The Korengal Valley in Afghanistan is heavily populated by hidden Taliban soldiers, and is thus perceived as one of the country’s deadliest hotspots. In 2007, the men of Second Platoon of Battle Company were sent into the region, thus commencing an elongated deployment with the goal in mind of establishing a foothold in the hostile area. The platoon’s base of operations is an outpost called “Restrepo”, which was named after a beloved medic who was tragically killed early into the operation. As the unit spends the next 15 months of their lives struggling to bring a sense of progress to the valley, Hetherington and Junger’s cameras capture the camaraderie, violence and aggravation of the soldiers. We see the men transition from “it can’t be that bad” swagger to an outlook of “good firefight” to “I want to go home” fatigue.

Restrepo contains no pontificating, political critiquing, or narration. Context and background is not provided; rather, the filmmakers plunge viewers into the line of fire with the soldiers. There are a host of interviews provided on occasion, but that’s it — the rest is on-the-scene footage of day-to-day life in the Korengal Valley, where a ride in a Hummer can come to a startling end with a dangerous firefight. The interviews with the men do not overwhelm the film, and the soldiers do not sentimentalize their experiences. Instead, the interviews add a simple grace note; a poignant reminder of “this really happened“. Fortunately, the men of Second Platoon are a compelling bunch – they are refreshingly honest, not to mention smart and funny (a scene spotlights some back-and-forth between two men over walkie-talkies that has the spark and comic timing that most scripted comedies lack). We see the soldiers attempting to cope with the dangerous conditions through humor and camaraderie — they crack jokes, they bust balls, and they enjoy it when someone plays a corny techno song.

In a few moments throughout the feature, the filmmakers find themselves in the midst of a firefight against an invisible foe, and these sequences come across as terrifying and disorientating in a way that makes generic Hollywood war movies seem callow in comparison. One of the most stunning sequences of Restrepo comes after a firefight, as the cameras capture the immediate, unguarded, completely raw emotional aftermath that unfolds when the platoon lose a man. All of this material is far removed from material seen on the nightly news, where horrible events are usually scrubbed clean for mass consumption. Of course, the filmmakers baulked from capturing graphic images of casualties since they had to treat the deceased and wounded with respect, but this is forgivable.

While there’s no outright political agenda, Restrepo does not ignore the mistakes which were made by the Americans. The platoon’s new captain is shown attempting to reach out to the valley’s tribal elders, and he makes no bones about his predecessor’s misjudged operating procedure. Through showing meetings with the locals, the “collateral damage” of later scenes has repercussions and a face.

Admittedly, Restrepo is not perfect — at times the film is meandering, and at other times strangely detached when it should pack more of a punch. Also, the passage of time is not conveyed as effectively as it should have been (there are no subtitles to inform us of the month or year, so the gaps in time can be head-scratching). Despite these shortcomings, rarely has such an unfettered and harrowing look at war been offered to the mainstream public. Heck, the film would probably have still been gripping had it been a staged “found footage” film (in the vein of Paranormal Activity or Cloverfield), but the stakes are raised considerably by the fact that everything we see contains real people in real danger. 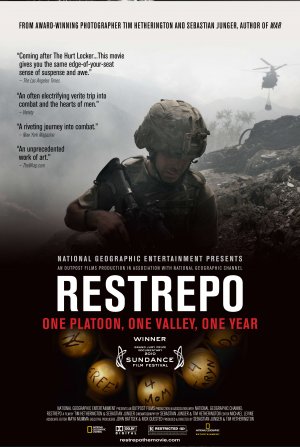