Think of the worst movie you’ve ever seen. There surely were some redeeming qualities, right? Maybe it was so bad it was unintentionally funny. Maybe it was plotless but didn’t seem to take itself too seriously. Maybe the dialog was weak, but the actors somehow came out unscathed. Maybe it had naked people in it. Heck, maybe now it’s even a cult movie.

With Camp Death III in 2D!, none of these things are true, although maybe someday it’ll be considered a cult hit. This is one of those movies that, thanks to the title and the film’s tagline (“This movie is stupid”), is clearly intended to be a bad movie. But even intentionally bad movies require some talent, because the filmmakers need to be nod-and-wink funny so that the audience can laugh along with them. I spent most of this movie with my jaw hanging.

Let me check off some of the particulars. For starters, the acting is on par with a third-grade rendition of “Hamlet.” There’s a lot of mugging, a lot of screaming, a lot of nonsense. There’s none of that knowing grin that an intentionally bad film must have. After all, this is supposed to be an inside joke. Look at that title, itself a parody of “Friday the 13th Part 3,” which was (in)famously shot in 3D. There’s no central character who’s relatively sane in a world of wacky personalities. There are just weird people who are odd for the sake of being odd. Caricatures, really. And then there’s the writing, which appears to be a first draft written on the back of a cocktail napkin by two stoners. I’m being unkind, but the script takes “unpolished” to a new level.

Camp Death III in 2D! (ha! there is no I or II; so funny) revolves around a former summer camp at which many, many murders occurred decades ago. It’s long been shut down, but Todd Boogjumper (Dave Peniuk, “Park Bench Parenting” TV series), a spunky, positive go-getter, has convinced his Uncle Mel (Darren Andrichuk, “The Evil in Us”), the camp’s owner, to reopen as a camp for the criminally insane. His counselors include his old friend Rachel (Angela Galanopoulos), who’s also full of spunk and verve and who has her own mysterious past to deal with. There’s another counselor whose name escapes me; his only defining characteristic is that he’s in a wheelchair. (There are subsequent wheelchair jokes, none of them particularly funny.) And then there are the campers, some who merely babble incoherently, some who are nymphos (of course), some who are psychotic, some who obsess over potatoes (the lone Irish guy, of course).

It isn’t long before the plot of counselors and campers alike being knocked off comes into play. This is where the tremendously low budget for this film rears its head. It seemed that anything that happened to be laying around the set made for a good murder weapon, no matter how ludicrous. One guy chokes on poop. A toaster kills one girl. It doesn’t matter, because you won’t care one bit about any of the victims. Most of them get a line or two before they’re knocked off. The others manage to be weird without being interesting, much like the movie itself.

On to the effects. Again, with a low budget one doesn’t expect complex visuals, but one does expect . . . well, something. The unhinged overacting does manage to distract from the supremely unbelievable effects. You wanna have a scene aping the hoverbike chase from “Return of the Jedi”? Can you do so and still keep the viewer in the movie? No? Ah, let’s do it anyway. It’ll be funny. (No, it wasn’t.) And then there’s the cinematography; perhaps it was just the early-access screener I saw, but there was a strange sped-up rhythm to each scene, almost as if the movie itself couldn’t wait to be over and done with.

But back to the acting. I’m reminded of the 1960s opus “13 Frightened Girls,” directed by Roger Corman, which featured many young women making their movie debuts — and, for several of them, it was their only film role. Because they were really bad at it. The same vibe is given off by the “actors” in Camp Death III in 2D! — they’re really, really bad. Not the over-the-top Stallone kind of bad, the “I’ve never been in a movie or on a stage before” kind of bad. The talent level would be the same if they just picked random people out of a Taylor Swift audience, no offense towards Ms. Swift. Everyone behaves as if they’re trying to impress someone with the mad acting skills they don’t have.

Camp Death III in 2D! is so bad that it’s unmemorable. It’s bizarre just for the sake of being bizarre. It’s largely incoherent, despite a standard and straightforward plot. It’s almost astonishing how terrible each aspect really is, every scene a paragon of cringe. Watching this was an absolute ordeal, even at 82 minutes. Please save yourself the time. 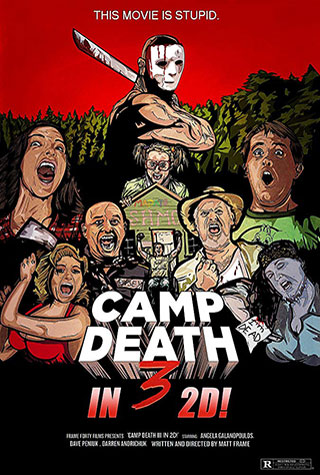