The exotically disturbing character-driven Dutch drama Meat (a.k.a. “Vlees”) is most definitely not your old-fashioned grandmother’s tenderloin steak of a sexual psychological thriller. Filmmakers Victor Nieuwenhuijs and Maartje Seyferth (who also is credited as a co-screenwriter along with consultant scriber Stan Lapinski) literally and figuratively leads the wide-eyed lamb to the slaughter in this twisted, titillating tale of emotional detachment yet thirsty urgency for forceful flesh and bone in this tawdry crime caper from The Netherlands.

Convincingly hypnotic, colorfully decadent and unapologetic in its branded rawness, Meat is a bizarre and bold commentary on the reckless human carnal compulsion layered underneath mental coldness and despair. Fittingly, Seyferth and Nieuwenhuijs delve into the perverse malaise of sexualized conversion through the damaged mindset of a pot-bellied, middle-aged butcher (Titus Muizelaar, “Crepuscule”) and his curvaceous, willing teenybopper apprentice (Nellie, “Finn”).

Skillfully, the aptly titled film is a potent and functional metaphor for the lost and wayward souls (both human and the victimized animals as edible sacrifices) that are numb and chopped up to the point of no return. Specifically, the spotlighted human species in Seyferth and Nieuwenhuijs’ calculating narrative opt for a convenient — if not hormonal mindlessness — manner in which to conduct their sense of unfeeling, brokenness, and disorientation through ritual flesh-peddling excess. Consequently, Meat is lustfully subversive and rooted in misplaced sensuality where inner spirit and integrity are replaced with provocative urges to pound the available flesh with aimless abandonment. Overall, the protagonists in the oddly compelling film are seasoned for the toxic taste of the unfulfilled heart while making the walking wounded almost as comparable to the slabs of dripping bloody animal carcasses laying around in the symbolic venue of grinding lifelessness — the butcher shop.

The premise involves an unnamed butcher (Muizelaar) whose desperate appetite for off-kilter, dark sexual fantasies is too overwhelming for description. In fact, the butcher is so consumed by his preoccupation for X-rated affection that he arranges to “get serviced” in the frozen meat locker room from an on-call hooker during business hours. Hence, the butcher’s need to “beat the meat” takes on a whole new meaning at the workplace. Just ask his cute shop assistant Roxy (Benner). In fact, Roxy had witnessed her womanizing mentor in hormonal action with his female visitor by video recording their steamy sexual session among the frozen hanging meat. It turns out that Roxy has the tendency to capture all that is focused upon her video recording lens.

When the butcher is not busy screwing random skirts on the side he is determined to coax the young blonde-haired Roxy into his world of seedy-minded sexual encounters. The butcher systematically breaks down Roxy with explicit-sounding whispers and intrusive bodily touches of how he could make her experience the ecstasy of a lifetime reserved solely for her benefit. It turns out that the tempted tart Roxy is game for the butcher’s lewd love-making techniques after all. Suddenly, the boisterous butcher and Roxy get down and dirty thus scoring another carnal conquest for the meaty mastermind.

However, things turn up ugly when the butcher ends up dead. The question remains: Who caused the death of this loin-preparing Lothario?

Soon, the very frumpy and weary Police Inspector Mann (also played by Muizelaar) is assigned to the case of the slain butcher. We witness the cop’s own kind of distant, stand-offish demeanor especially toward his wife Sonia (Elvira Out, “Lover or Loser”) who pleads with her husband not to dump her. Inspector Mann, ever so blunt and blistering, tells Sonia that she means nothing to him anymore both at a local restaurant then in the bedroom where he rebuffs her affectionate attention. Of course we see where Mann gets his stinging indifference and insensitivity from when he is seen with his wheelchair-bound mother (Kitty Courbois, “Ballast”) reminding her son what a failure he is just like his late father. Clearly, no one will mistake Mann’s critical Mommy Dearest for Mother of the Year anytime soon.

As Mann investigates his dead doppelganger’s demise he soon will come across paths with the butcher’s pretty plaything Roxy and soon gains inside into her complicated backstory involving her lusty dalliances with the butcher, her caustic drunken sexual encounters with a couple of opportunistic party-goers, her affiliation with animal activists and her weird hair-raising bedroom practices with unbalanced Turkish boyfriend Mo (Gürkan Küçüksentürk, “Taart” TV series). As did the deceased butcher, Mann starts to become sexually intrigued and mystified by the youngish sexpot Roxy where she fills his mind with visions of lingering naughty, forbidden thoughts.

Story-wise, Meat more than embraces its obligation to parlay its stark character study into a grainy showcase of blue-collar shock value featuring everyday folks targeting whatever ready-made disillusionment worth highlighting in blind salaciousness. Notably, Muizelaar is absolutely winning in his dual roles as the aging and aroused bad boy butcher and the shady law enforcer with questionable motives. Both men are haggard and bogged down by stagnation and frustration. Muizelaar is able to incorporate some hearty ambivalence about the way the audience feels about these seemingly disheveled older men that feel trapped by the passage of time and insecurity. The fact that the matured butcher cannot relate to a real sensible woman beyond the flesh-craving frivolity for beleaguered bimbos is indeed incredibly sad yet absorbingly telling. As for Inspector Mann the fact that he has callously resigned to loving and caring for his needy suicidal wife in search of his escape route to selfish seclusion tells another tortured tale sold so effectively by the committed Muizelaar. Plus, Benner’s Roxy is a vulnerable vixen laced with a tantalizing mix of devilish playfulness and exploitative curiosity. The thought of Benner’s vibrant loose lass creating an infectious obsession for Muizelaar’s two unctuous oldsters looking to fill an empty sexual void all adds up to the surreal cynicism embedded in Seyferth and Nieuwenhuijs’ collaborative psychological sexual suspense caper.

Sure, there are elements of confusion to be found in Meat but the risqué performances, the frank examination of sexual release as a sociological and psychological necessity for falsified liberation and expression, and the butcher shop as the creative placement and interpretation for discarded body parts ripped to assorted pieces sexually and otherwise brilliantly culminates in a flexible and feisty film noir that resonates with acidic truthfulness in chronicled alienation. 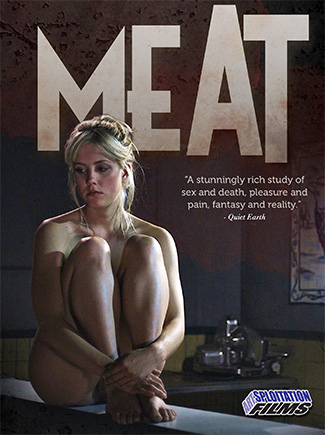