Whether one thinks Edward Snowden is a patriot or a traitor for revealing CIA and NSA (National Security Agency) secrets will probably not depend on this movie, Snowden, as those who believe one way or the other will still hold those opinions after this 2-hour, 15-minute presentation.

Still, director Oliver Stone (“Savages,” but better known for his Academy Award-winning efforts “Platoon” and “Born on the Fourth of July”) attempts to present both sides as fairly and accurately as he can and he equally criticizes both Republican and Democratic presidents (unlike, say, his 1991 film, “JFK,” where he was so slanted in his conspiracy theories even those who had doubts about the Warren Commission Report thought he went too far). Stone also wrote (along with Kieran Fitzgerald, “The Homesman”) the screenplay, which was based on books by Anatoly Kucherena and Luke Harding.

The title character, competently played by Joseph Gordon-Levitt (“The Night Before”), is given the opportunity here to prove he was only trying to protect his nation by stealing these secrets and then releasing them to the press in 2013. Since that time, he has been living in Moscow (and this lifestyle choice has buttressed the feelings of those who believe he was simply a spy who was in league with the Russians, Chinese or even worse). The events of the picture takes place from 2004, when Snowden is shown training with the U.S. Army Reserve Special Forces, through 2013, when he reveals that the government is not only using its highly-sophisticated and technologically-advanced intelligence agencies to spy on possible terrorists and lawbreakers, but ordinary American citizens, as well.

These thoughts are far from the conservative young American in ’04, where, after an accident precludes him from further military service, he gains employment at the Central Intelligence Agency (because, he says, “It would be cool to have a Top Secret clearance.”) Despite such a cavalier attitude, he is nonetheless accepted into that organization because his superior, Corbin O’Brian (Rhys Ifans, “The Amazing Spider-Man”), sees something special in him. This is confirmed when Snowden completes a five-hour simulation test in about 38 minutes. Sent to Geneva to ostensibly work on a back-up system, he asks for field operation experience, but quickly sours when he learns how far the agency (especially his boss, Timothy Olyphant, “Mother’s Day”) will go to recruit an asset, including blackmail and possibly even worse.

After resigning from the CIA, he gets work (because he is an obvious computer whiz kid) as a subcontractor for Dell, stationed at the NSA facility in Tokyo. There he lives seemingly happy with girlfriend, Lindsay Mills (Shailene Woodley, “The Divergent Series – Allegiant”), but continues to discover that there are programs in which the lives of everyday Americans (as well as those throughout the globe) are subjected to spying on their supposedly private calls, chats and Internet communication. During his years with Dell, he moved from overseeing system upgrades for the NSA to working as what he referred to as a “cyberstrategist” and an “expert in cyber counterintelligence” at several U.S. locations, including a short stint in Maryland before taking a position in Hawaii as a lead technologist for the NSA’s information-sharing office, which focuses on the electronic monitoring of China and North Korea, the last three years of which were with consulting firm Booz Allen Hamilton.

While here and after seeing the Director of National Intelligence flatly tell Congress there was no covert spying activity against American citizens, Snowden reaches a breaking point and decides to go to the press with his findings. He copies files onto a card reader (which in reality took months, although Stone accomplishes it in just one scene) and gives it to journalist Glenn Greenwald (Zachary Quinto, “Star Trek Beyond”), Oscar-winning documentarian Laura Poitras (Melissa Leo, “London Has Fallen”) and the Manchester Guardian, among others.

The files in question, as told to the House Armed Services Committee by Army Gen. Martin Dempsey, “. . . [T]he vast majority had nothing to do with exposing government oversight of domestic activities. The vast majority of those were related to our military capabilities, operations, tactics, techniques and procedures.”

And according to some government sources, when retired NSA director Keith Alexander was asked in a May 2014 interview to quantify the number of documents Snowden stole, Alexander answered, “I don’t think anybody really knows what he actually took with him, because the way he did it, we don’t have an accurate way of counting. What we do have an accurate way of counting is what he touched, what he may have downloaded, and that was more than a million documents.”

Nevertheless, if Stone takes just a tad bit more dramatic license with this story, it’s nothing he has not done in the past and he certainly has a right to his side of the story. As filmcraft, it is often well done and despite the controversial subject matter, is topical and quite alluring. Gordon-Levitt does a decent job in the titular role, but seems to sleepwalk at times, while his scenes with Woodley have about as much chemistry as O.J. and Nicole Brown Simpson.

Speaking of this actress, it’s amazing Stone could not have found a more competent representation of this character as her onscreen time takes far too much away from the really compelling storyline. Quinto and Leo acquit themselves nicely in their limited, somewhat reactive roles, while Scott Eastwood (“The Longest Ride”) and Olyphant get to chew some scenery as CIA and NSA bosses, respectively.

Also, in his effort to capture all of the minutia of America’s espionage technology, the director often gets bogged down in confusing computer-speak and puts the human and more dramatic elements on the back burner, which also slows the pacing of Snowden down considerably and adds at least 25 minutes which could easily have been excised with no loss to the project.

This isn’t to say that Snowden is not an interesting movie and certainly one which will get some Oscar buzz, it’s just bloated in many places — unnecessarily so. 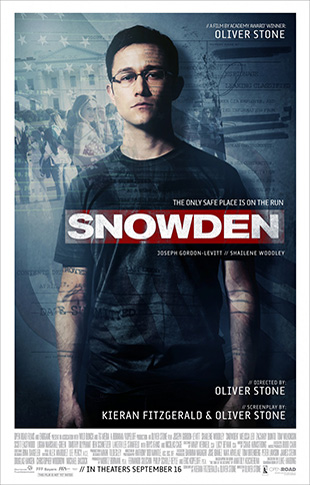