“A fulfilled dream is a disappointed dream” — Amos Oz

In a quiet moment in Natalie Portman’s (“Knight of Cups”) beautiful and poetic A Tale of Love and Darkness, a mother says to her young son, “If you have to choose between telling a lie or insulting someone, choose to be generous.” When the boy asks her whether or not it is alright to lie, she replies, “Sometimes . . . yes. It’s better to be sensitive than to be honest.” It is an important lesson, one I wish I had learned earlier in my life. Written and directed by Portman, who also stars as Fania, Amos’ (Amir Tessler) troubled mother, the film is based on the memoir of Israeli novelist and journalist Amos Oz and is set in Jerusalem in the critical period before the transition from the British mandate in Palestine to the establishment of the State of Israel in 1948 following the Arab-Israeli War.

Opening in 1945 after the Klausner’s escape from the desecration of a once vibrant culture in Eastern Europe, it is the story of the early influences in Oz’s life that propelled him to become a famous writer. As narrated by Moni Moshonov (“We Own the Night”) and told from the viewpoint of the older Amos Oz recollecting his past, the film attempts to probe the depths of a family whose dream of a land of milk and honey becomes darker as it progresses, telling us that the worst thing that can happen to a dream is that it is fulfilled. Amos’ father Arieh (Gilad Kahana, “The Man in the Wall”) is a librarian who has just published is first novel and desperately wants to achieve the success of his own father, historian Joseph Klausner. Though he does not succeed, he never stops being thankful for Israel, telling his son, “You’ll be bullied in school, but not because you’re Jewish.”

We learn early in the film that Amos’ mother Fania blames herself for leaving behind a life of wealth. It is a self-inflicted wound exacerbated by her own mother’s verbal cruelty, one that is manifested by insomnia, migraine headaches, and a long struggle with depression that ended with her suicide at the young age of 38. Fania is a story teller whose stories, fables, and tales of far-away lands continue to enrich Amos’ life and Amos himself begins to tell stories to keep bullies from attacking him at school. The humble Amos denies that he is sensitive, saying he wants to be a farmer or a dog murderer and goes to work on a kibbutz, but the sensitive can do nothing about who they are but only attempt to share it and make it real for others.

Amos’ story is depicted in the context of the short-lived joy after the U.N.’s vote to partition Palestine and the Arab attacks on Jerusalem that killed many of the family`s friends and neighbors. Their home becomes a shelter for those fleeing the Arab bombs and the real consequences of Zionism and the ideal of statehood become apparent, a society caught between memories of the holocaust and fears that it will happen again. As Fania’s growing depression and her drift from reality dominates the landscape, the film loses a measure of dramatic impact, yet it remains compelling and literate, attesting to the way the promise of Israel has been shattered by strident voices fighting centuries-old struggles for domination.

A Tale of Love and Darkness is an intimate film, a film of memory, one told in incidents and flashbacks. Like a film of Terrence Malick, it talks in whispers, a language that exists only in the soul. There is little plot to describe, only moods and gestures. Fania’s death is the film’s central theme and it remains a mystery, buried in the enigma of a woman who has forgotten how to dream, yet it is transcended by the death of the dream of two vibrant cultures living together in peace and brotherhood. Early in the film, Amos is on his best behavior at a party in the home of a Palestinian neighbor. When he meets an Arab girl who can speak Hebrew, there is an immediate connection and he tells her that, “There is room for two peoples in this land,” but the dream ends suddenly when Amos, playing at being Tarzan, falls from a tree when the chains of a swing break injuring a little girl and the sudden chasm between the two cultures becomes a sad portent of the future. 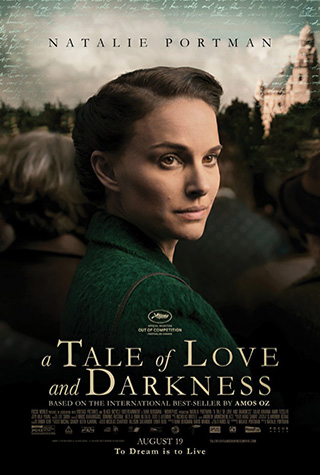