During World War II, many European countries occupied by Nazi Germany had resistance movements that fought against the invaders with whatever methods they could. Czechoslovakia’s resistance led to Adolf Hitler’s third in command, SS General Reinhard Heydrich and architect of the Final Solution, being stationed to Prague, where he instituted a brutal crackdown on the Czech people resulting in thousands of deaths. The Czech government, in exile in London, commissioned Operation Anthropoid, a mission to assassinate Heydrich, and parachuted undercover agents into Nazi-occupied Czechoslovakia to carry out the mission. Sean Ellis’ film about this mission focuses on the two agents tasked with the assassination, Jan Kubis (Jamie Dornan, “Fifty Shades of Grey”) and Josef Gabcík (Cillian Murphy, “In the Heart of the Sea”), and the dangers and difficulties encountered as they attempt to carry it out.

A film such as this could run the risk of being flag-waving or a Boys Own adventure, but Ellis eschews this approach and instead delivers a lean, gripping and at times grueling thriller. The detail of the production and costume design as well as the sometimes slightly sepia-tinged cinematography convey a strong sense of period, while the Prague locations give an extra sense of realism. Realism is emphasized throughout the film and, while there are doubtless liberties taken with the recorded events, these need not interfere with the palpable fear and paranoia of Jan and Josef, as well as the other characters they encounter including resistance leaders Ladislav Vanek (Marcin Dorocinski, “The High Frontier”) and Uncle Hajský (Toby Jones, “Morgan”), and local allies Marie Kovárníková (Charlotte Le Bon, “The Walk”) and Lenka Fafková (Anna Geislerová, “Fair Play”).

One of the great strengths of Anthropoid is the care taken over these characters, both in Ellis and Anthony Frewin’s script and the committed performances of the actors, to convey the ordinariness of the people involved. Initially, the English dialogue with Czech accents may be a little jarring, but after a while the viewer can settle into it and, to mark the nationalities out, the German characters speak German that is not subtitled, which places the viewer in the position of the Czechs who need interpreters to understand. This helps to build viewer sympathy with the outclassed resistance fighters. Jan and Josef might be trained soldiers, but they are out of their depth in this operation, while the resistance fighters are improvisers with little or no military experience. Fear drenches the film, the drab flats where the assassins hide out removing any sense of glamour or romance. At one point, Lenka comments that Marie has romantic ideas about war, but the viewer is unlikely to have such illusions. The opening sequence sets the tone well, as over the shoulder shots of Jan and Josef after their parachute landing place the viewer alongside them in the dark woods. An early encounter with danger erupts into sudden violence with no victory other than survival, the sequence shot at close quarters so as to bring the viewer close to the intimacy of violence. This is indicative of the film as a whole, as Ellis favors low-key direction and atmosphere in favor of flair. Robin Foster’s score is eerily invasive, adding to the film’s pervasive sense of menace.

Yet amongst the grimness are some touching moments as well: The understated romance between Marie and Jan as well as the even more tentative relationship between Josef and Lenka. The family home of Mrs. Moravec (Alena Mihulová, “Home Care”) and At’a (Bill Milner, “X-Men: First Class”) where the two men hide gives an effective sense of life in an occupied country: Cooking, washing and violin practice go on even while people in the streets are rounded up and shot. Small gestures express the barely contained terror, such as the frequent lighting of cigarettes and, on more than one occasion, the careful, methodical loading of bullets into a magazine soothes a full-on panic attack. There is a thick irony to this, as bullets are both the cause of the panic and a means of dealing with it. The minutiae of these moments illustrate the care and precision involved in staying alive, and of fighting an undercover war.

Not that conflict is restricted to Czechs versus Germans, as Ladislav and Uncle Hajský clash over the best way to fight their war of resistance, Ladislav opposing the assassination of Heydrich because of the anticipated Nazi retaliation. This additional reality of war adds another layer to the film, as Anthropoid questions the benefit of a high target assassination. Would it make more sense to target German equipment stores or cut their supply lines? Would other assassinations carry less risk of reprisal? Debates rage within the resistance, with Uncle Hajský realizing the crucial reason behind the assassination: It will prove if Czechoslovakia is still prepared to fight. Despite cynical views that Operation Anthropoid is little more than pandering to the Czech government’s wish to appear strong to the Allies, the political symbolism of killing a high-ranking Nazi ultimately carries more weight than the various other arguments, and thus it goes ahead.

The actual assassination attempt, as well as the final sequence where the parachutists are under siege in a church, is both emotionally grueling and technically brilliant. Director of Photography Ellis again favors an intimate style, cutting between medium shots and close-ups of the actors’ face to long shot points of view, the enemy often viewed through and around obstacles which serves to express the combatants’ dire straits. When violence erupts, it is messy and discordant, multiple bullets bursting across the frame in barely controlled panic rather than precise, surgical shots. These sequences are also agonizingly long, expressing further the difficulty and extremity of these men’s situation. Just as guerrilla warfare is long, drawn-out and painful with no guarantee of victory, so are these sequences drawn-out and unrelenting. Adding to the onslaught on the viewer are some graphic sequences of torture that do not shy away from the pain and suffering, as well as the humiliation, of the victims. No one is likely to walk away from Anthropoid unshaken, as Ellis and his cast and crew have crafted a brutal and sometimes savage assault on the viewer’s senses, with a detailed and compelling portrayal of desperate people in desperate times. 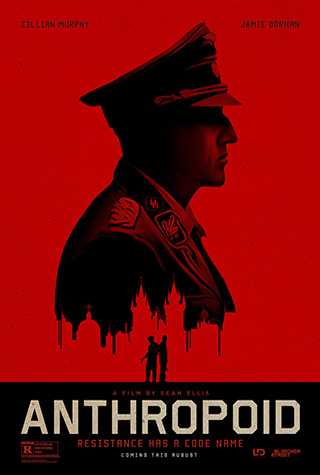