With In the Heart of the Sea, director Ron Howard, despite his Midwest Oklahoma roots, decided to be the umpteenth moviemaker to take on the epic (and almost unconquerable) tale of “Moby Dick,” Herman Melville’s world famous novel about a 100-foot white bull sperm whale that simply will not be captured. He follows such other helmers as Orson Welles, John Huston, Paul Stanley and Philippe Ramos, among others.

This picture is based on the non-fiction book with the same name published in 2000 by author Nathaniel Philbrick, “In the Heart of the Sea: The Tragedy of the Whaleship Essex” takes place in 1850 as author Herman Melville (Ben Whishaw, “Spectre”) interviews Thomas Nickerson (Brendan Gleeson, “Suffragette”) to gain research for what would become the Great American Novel, which was supposedly based on true events.

In 1820, Nickerson was a 14-year-old crew member of the whaling ship Essex. He has not aged well (in fact, he looks NOTHING like his younger self, Tom Holland, “How I Live Now,” even 30 years later). The ship was captained by George Pollard Jr. (Benjamin Walker, “Abraham Lincoln: Vampire Hunter”), while the First Mate Owen Chase (Chris Hemsworth, “Thor: The Dark World”) is much more experienced wearing his prized harpoon pins and the one getting his hands dirty and dealing with the men before they run into the mythical creature who seems quite aware it is bringing about their destruction. Yes, the yet-to-be-named Moby has a king-sized brain all of it’s own.

After relating all of this in standard flashback format (the basic seafaring points being the storm at sea, frightened and mutinous sailors, animosity between Captain and First Mate; each being staple of every wooden sailing ship plot from 1935’s “Mutiny On the Bounty” to 2003’s “Master and Commander: The Far Side of the World”). Melville seems particularly interested in the giant sperm whale that left the Essex in ruins, but Nickerson is haunted by what came after: Being stranded in the middle of the ocean for three months when the film becomes a waterlogged version of “Alive.”

The trouble with making a movie like In the Heart of the Sea in this day and age is that there is little or no understanding of just how valuable the whale was to the world at the time. Before petroleum was pumped out of the ground, whale oil was used to light the houses and cities of the world. It seems a terrible waste by our modern sensibilities, but that was just the way it was. Even when Huston’s classic version (starring Gregory Peck as Captain Ahab) was made in 1956, there were probably still a few oldsters who remember the old whale oil lanterns in some older houses. And, of course, that was long before the advent of Greenpeace and the “Save the Whales” campaign, among other efforts to keep the animal from near-extinction.

Here, the whales (hundreds of them at some points) are as realistically created as possible, but still seem rather lifeless. Most people, however, are going to side with the mammoth mammals and little enough empathy is invoked toward the cast, anyway. That’s just one of the problems, the other being the overused dramatic tension; Pollard is from a sea-faring family, but is completely incompetent and everyone realizes it. On the other hand, Chase is descended from farmers and is automatically judged not to have the sea in his blood, which I supposed meant a lot more in 1820 than it does today. As such, the two characters clash often due to not only their upbringing, but also how each of them wants to command the ship.

Probably for this reviewer, the most satisfying dramatic portion lies in Melville’s attempt to dig the truth out of a reluctant and ashamed Nickerson. For whatever it’s worth, that part has at least some consequence. As for this cast, I expected much better. Not so much perhaps from Hemsworth (who did stand out in Howard’s last production, “Rush”), but this is another disappointing film featuring Whishaw this year and the talented Murphy is used so little you want to scream. Finally, the computer-generated (none of the animals are real) great white whale — which seems to be able to outwit the humans at every turn (even saving a harpooned relative at one point) — does its best to provoke as many major confrontations as it can, but there is no battle royale and the final confrontation amounts to nothing.

It seems such a terrible lost opportunity that the Chase character goes through this downward spiral of hunting a whale for so long without success; failing to bring the beast in after seeing him again in person several times. It has been said that Hemsworth lost upwards of 50 pounds for the role while his weight loss is only featured briefly (at the conclusion), but, like everything else, it was really all for naught.

The entirety of In the Heart of the Sea feels like a missed opportunity for the director, the cast and the visual effects teams. It is a shame that this could have gone in so many positive directions, but instead ended up as this film. Once again, not a terrible mess, but another example where a movie could have been so much more and just didn’t have those few extra ingredients that could have — should have — put it over the top. 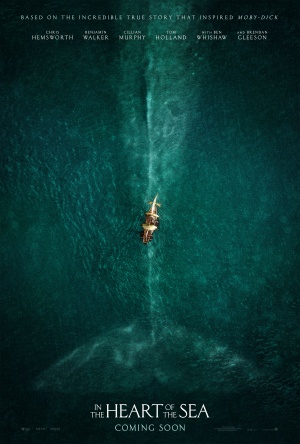