Cinema has the ability to document, dramatize, inspire and educate. Suffragette succeeds in doing all of these things, while also being hugely engaging and entertaining. Writer Abi Morgan and director Sarah Gavron, along with a committed cast including Carey Mulligan, Helena Bonham Carter, Anne-Marie Duff, Brendan Gleeson, Ben Whishaw and (very briefly) Meryl Streep, deliver an urgent and compelling political drama about major historical events and avoid the pitfalls of becoming polemical and tedious.

As a dramatization of the activities of the Women’s Political and Social Union in London in the early 20th century, Suffragette creates a lively group of characters. The protagonist is Maud Watts (Mulligan, “Drive”), a laundry woman initially devoted to her work and family, husband Sonny (Whishaw, “The Lobster”) and son George (Adam Michael Dodd). The Watts are fictional figures, Maud standing in for the many working class women who joined the Votes for Women movement. Mulligan holds the viewer’s attention throughout, her years of repressed pain and suffering palatable as they steadily rise into radical action. Sonny is interesting in this regard because, initially, he is helpful and protective of Maud, but as her participation in the suffrage movement increases, he becomes distant and even cruel. But Sonny’s behavior is not inconsistent: Before bed, he insists that his son salute a picture of King George V (it is surely no coincidence that the Watts’ son is also called George), and views Maud’s primary role as his wife. Sonny represents therefore unintentional yet institutionalized misogyny — men are legally enshrined as masters and women belong in a subservient role. This aspect of the film crucially expresses what the women are fighting against, as Maud’s sense of righteous indignation is largely fed by her husband.

Maud’s development to freedom fighter is carefully paced, as she begins by supporting her friend Violet Miller (Duff, “The Last Station”), then takes up the battle alongside Edith Ellyn (Bonham Carter, “Dark Shadows”) as well as hearing Emmeline Pankhurst (Streep, “Ricki and the Flash”) speak. The suffragettes’ escalating campaign of civil disruption leads to increasingly brutal responses from the authorities, including police violence, arrests and, in the film’s most distressing scene, force-feeding of prisoners on hunger strike. By keeping the focus on Maud and her specific involvement, the film maintains a personal story in the midst of political upheaval, not unlike other recent films about social activism such as “Pride” and “Selma.”

This contemporary cycle of British activist cinema is striking in its ability to inspire its viewers. A masterstroke of Suffragette is its inclusion of police surveillance, masterminded by police inspector Arthur Steed (Gleeson, “Calvary”). Steed is introduced in a scene in which he proudly displays new cameras that allow for easier surveillance, creating contemporary resonances with fears around surveillance culture. There may not have been the Internet at this time, but the authorities’ ability to spy on the radical and the potentially radical is presented as a key aspect of the oppressive state machinery. Steed serves as the main representative of this machinery against which the suffragettes struggle, and crucially he is not a stereotypical, narrow-minded bigot. Rather, he is a realist who understands the suffragettes to be organized and dangerous to the establishment he serves. At times there are suggestions of sympathy from him, but his commitment to the law is absolute, making him a genuine threat to the suffragette movement. But therein lies the film’s own radicalism — in one key scene Maud tells Steed that she has no interest in the law because she has had no say in making it, while another scene features the line, “if you want me to respect the law, make the law respectable.” Even today, there are laws that beggar belief and yet we follow them because they are the law. But this is a tale of radical opposition rather than violent revolution, valorizing the struggle to improve the legal situation rather than simply objecting to it. As Mrs. Pankhurst states, the suffragettes want to be lawmakers rather than lawbreakers.

This is the educational aspect of Suffragette, not in terms of historical events but in terms of individuals within political activism. Like “Selma” and “Pride,” Suffragette is not a polemical tirade against institutionalized sexism (which would be incredibly tedious), but a carefully measured portrayal of how activism works. It is not enough to have an idea or even a philosophy — in this case votes for women — it is essential to have a practical plan of action. Furthermore, to work as a drama there must an anchor for the audience. Both the practical plan and the audience anchor are provided by the arc of Maud, as Suffragette begins with her as a subservient wife and worker, moves on to her delivering testimony in the House of Commons, and then progresses to violent civil disruption and the key eventual sacrifice. Throughout the film, we are allied with Maud as she learns the different stages of resistance and defiance, feeling her pain and triumph in equal measure. Director of photography Eduard Grau conveys Maud’s experience through handheld, close-up cinematography that frequently fills the screen with Maud’s face, her eyes speaking volumes even when she is silent. This visual approach also brings the viewer into the activism, making us appreciate the protestors’ position, giving us a sense of their desperation and commitment, as well as the threats they face.

Thus the film educates its viewer about activism and documents some historical events, including archive footage in its final moments. One must remain wary of fictional depictions of historical events, and any historian, amateur or professional, will point out inaccuracies and artistic license. Nonetheless, the significance of the suffragette movement demands SOME form of cinematic telling, and Suffragette also documents the dates when various countries instituted votes for women. New Zealand appears as the first, instituting this democratic right in 1893, while Britain did not achieve full voting rights until 1928 and the United States in 1920. Shockingly, Switzerland did not enfranchise women until 1971. Less shocking but more depressing, only in 2015 is Saudi Arabia considering women for the vote. The film’s political argument is evident from these dates — a great deal has been achieved, but so much more needs to be done. Suffragette, therefore, succeeds both as a dramatic telling of historical events, and a reminder to never give up the fight and never surrender. 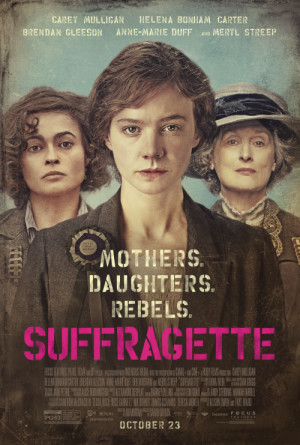