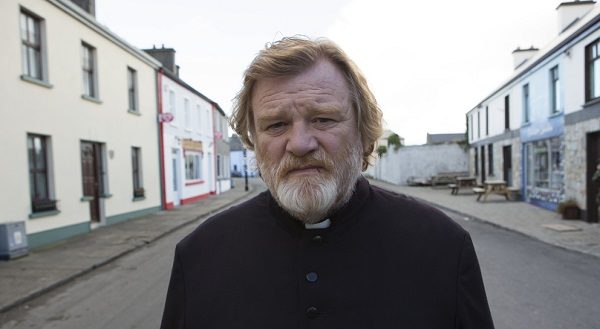 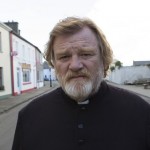 In a world grown cynical, decency stands out, but often only to be mocked and abused. In Georges Bernanos’ novel The Diary of a Country Priest, a sickly, humble, and idealistic young priest pays the ultimate price for the spiritual lethargy of his parish, while Father James Lavelle (Brendan Gleeson) in John Michael McDonagh’s brilliant Calvary is vulnerable to the malicious cynicism of his community. Unlike the Curé d’Ambricourt, however, Father James is a physically strong and robust man with a tough skin born of adversity, but is betrayed by those who have lost faith, not only in the secular and religious institutions of man, but in themselves and humanity.

One of the more thoughtful and intelligent films of the year, Calvary is billed as a comedy/drama, but the drama is bleak and the comedy is of the mean-spirited variety. Set in County Sligo in Ireland, the remote village is a microcosm of a world in which victimization has replaced responsibility. Though Father James is a good man, McDonagh makes it clear that the church’s sorry record of ignoring sexual abuse among its clergy will and should exact a heavy price. As the film opens, the burly priest sits alone in his confessional box listening to the voice of an obviously disturbed man telling him how he was sexually abused by a priest for five years beginning at the age of seven.

The deeply resentful man tells the priest that he plans to murder him the following Sunday at a specific time and place to atone for his mistreatment. Since the man who molested him is dead, he reasons that killing an innocent priest will make an impactful statement. Father James recognizes the voice and talks to the Bishop (David McSavage) about it, but does not contact the police, even when there is a violent attack on the church property. Although he faces an uncertain future, like the Curé in Bernanos’ novel, he regularly visits the homes of his parishioners in the village, counseling a local butcher (Chris O’Dowd) who was thought to have abused his wife (Orla O’Rourke), until it is discovered that her part-time lover (Isaach De Bankolé) was responsible.

He also talks with a suicidal writer (M. Emmet Walsh) about life and death, a young man (Domhnall Gleeson) in prison for murder and cannibalism, and a wealthy financier (Dylan Moran) who no longer cares about anything and shows that by urinating on an expensive painting. The string of misfits doesn’t end there. The father visits a staunchly atheistic doctor (Aidan Gillen) who quips that a group of teenagers who were killed in a car accident and a tourist from France are in the morgue “where they belong,” a police inspector (Gary Lydon) whose sexual tastes lean towards boy prostitutes such as his “regular” (Owen Sharpe), and an unhappy young man (Killian Scott) who wants to express his violent tendencies by joining the army.

As Father James, Brendan Gleeson delivers a powerfully authentic performance that captures the nuance of the character in all his complexities, especially apparent in a scene of exquisite gentleness with a woman (Marie-Josée Croze) who has just lost her husband but maintains her faith, and with a conversation with Fiona, his troubled daughter (a terrific Kelly Reilly) as they stroll along the beach. At one point, he says to his daughter that we talk about sin much too often and not enough about virtue. When his daughter asks what his favorite virtue is, he says that it is “forgiveness.” Like Jesus, Father James may ask for forgiveness for others, saying that they know not what they do. The only problem is that they know not what they do once too often and those that attempt to tell them are crucified. 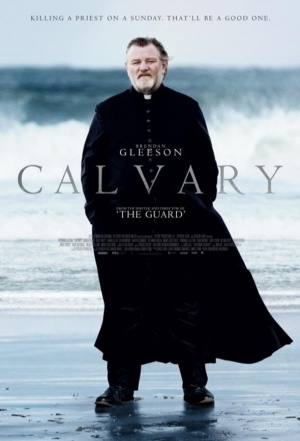