For the third time in recent history (with the same lead actor no less), director Peter Berg takes a contemporary event — U.S. troops in Afghanistan in “Lone Survivor,” an oil rig disaster in “Deepwater Horizon” and now with Patriots Day, the 2013 Boston Marathon bombing — brings it to the big screen and leaves the audience emotionally drained as he once again balances the uber-violent action and destruction with a narrative that provides enough heart-tugging moments to create more than enough throat lumps at its conclusion.

The story (by Berg, Matt Cook and Joshua Zetumer) concerns Boston Police Department Sergeant Tommy Saunders (Mark Wahlberg, “Ted 2”), a suspended nonconformist detective used to a suit and tie, but is now walking the beat in uniform. He is ordered by Police Commissioner Ed Davis (John Goodman, the upcoming “10 Cloverfield Lane”) to patrol the Boston Marathon as a final act of his punishment before re-institution.

The siblings are shown planning the attack at home in front of Tamerlan’s own wife and young daughter, placing B-B’s, nails, metal shards and other shrapnel inside two pressure cookers, then placing them near the race’s finish line.

With the blasts completed, it’s Berg’s task to lead us through the subsequent investigation, introducing the FBI led by Special Agent Richard DesLauriers (Kevin Bacon, “Black Mass”), Homeland Security (an official grills Tamerlan’s wife in a tense confrontation) and first responders who rush in after the two explosions ripped through the crowd.

That’s story number one. The second is the actual capture of the panicked brothers, who kill an MIT campus policeman, Sean Collier (Jake Picking, “Dirty Grandpa”), grab Meng, steal several cars and finally battle it out in a high-octane sequence with Watertown, Boston and federal law enforcement.

Patriots Day is bit long in the tooth clocking in at 133 minutes, but it’s time well-spent, and those who lived through this (most of the American film-watching public) recall how the city came together after the tragedy that took three lives and wounded and maimed hundreds (if a poignant scene of a Boston police officer standing guard over the body of a small boy doesn’t bring a tear, you are one heartless robot).

With chances to go over the top during the acting aspects, Berg maintains a realistic and steady presence with his cast and Wahlberg, Goodman, Wolff and Simmons shine in very emotional performances.

The look of the picture is also amazing (credit cinematographer Tobias A. Schliessler) and, yes, I realize costume, set and art designers did not have to create a fantasy world or historical scene from an era gone by, but the look, feel and atmosphere of the 2013 event are still captured perfectly.

On a personal note, as a journalist, I covered the bombings almost four years ago, writing several articles about the effects on residents of Idaho (there were almost 90 participating in the race from this state), and the trial and conviction of Dzhokhar Tsarnaev. It was very personal to me and I dare say that, while it may not cause the same feelings, Patriots Day will most likely bring a wave of sadness and sympathy over any viewer. For me, it is already one of the year’s top films. 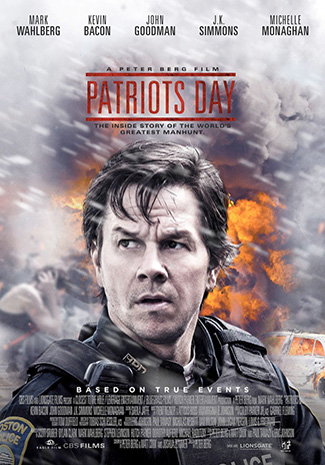