The conflict between satisfying one’s emotional needs and doing the right thing is spotlighted in Derek Cianfrance’s (“The Place Beyond the Pines”) intense drama The Light Between Oceans. Set in 1918, the film is based on M.L. Stedman’s debut novel, a work of sparse and understated beauty. Tom Sherbourne (Michael Fassbender, “X-Men: Apocalypse”), a traumatized World War 1 veteran, has taken a job as a lighthouse keeper on the remote island of Janus off the coast of Western Australia. We later learn that his decision to isolate himself from a life of comfort arose from his guilt about surviving the war when so many of his fellow soldiers were killed.

Tom’s solitary life is changed, however, when he meets his boss’s daughter, Isabel Graysmark (Alicia Vikander, “The Danish Girl”). After a brief romance and courtship consisting in large part of heartfelt exchanges of letters, Tom and Isabel are married and hope to raise their family on Janus. After two tragic miscarriages, a boat miraculously washes ashore carrying the body of a dead man and a very much alive infant girl. Since Isabel’s second miscarriage has been kept secret from her family and friends, they decide to keep the little girl they name Lucy and raise her as their own.

Though Tom knows that the decision cannot be justified either legally or morally, he lets his heart rule, basing his choice on what it will mean for his wife’s happiness. It is a choice that is fraught with unknown pitfalls that soon become real when a chance encounter with a woman weeping at an empty grave mourning her husband and daughter leads to an ever spiraling chain of events that capture the torment of a man caught between his love for his family and the despair of a distraught woman (Rachel Weisz, “Youth”) whom he has the power to help.

The Light Between Oceans tells a compelling story that has enough intrinsic power to touch us deeply. Rather than probing the soulfulness of its characters in a way that is subtle and nuanced, however, the film is often overwrought and fails to involve us on a level that feels authentic, short circuiting its emotional force with an intrusive musical score that signals how we are supposed to think and feel.

The moments that do evoke real emotions come from simple situations told without straining for effect: The reading of passionate letters between Tom and Isabel, a woman crying at an empty grave, and a little girl now known as Lucy Grace, (Florence Clery) joyously riding with her grandfather (Bryan Brown, “Gods of Egypt”). Moments like this convey a sense of the great film that could have been made if everyone involved was not trying so hard to make The Light Between Oceans an epic.

'Movie Review: The Light Between Oceans (2016)' has no comments 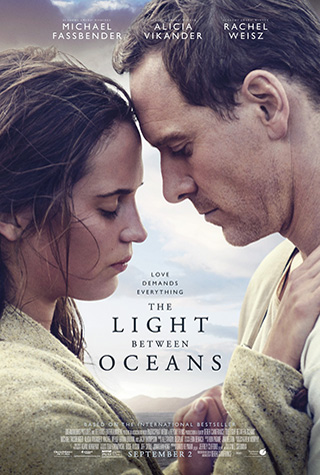