The story of Danish painter Einar Wegener’s transition into Lili Elbe seems tailor-made for cinematic examination. There’s a physical aspect that can be attended to visually as Lili (Eddie Redmayne, Oscar winner for “The Theory of Everything”) comes to the external forefront when Einar begins wearing dresses and wigs. And there’s a deeply internal aspect as Lili struggles with being an outsider and wrestles with the challenges of her new life. There’s a lot of potential there, so the whole story as explored in The Danish Girl feels a bit like a deflating balloon once Tom Hooper gets his hands all over it.

Hooper is allergic to nuance, which would seem a key ingredient in capturing Lili’s experiences. Perhaps a certain bluntness isn’t instantly out of line, but this movie requires a sensitivity and at least an attempt at understanding that feels human and organic. Hooper’s approach is robotic instead, stiffly navigating Lili’s arc and transforming what should be a bold step ahead for mainstream cinema joining the trans conversation into something that teeters perilously close to parody.

Everything feels overly calculated from the start, so we see how much easier life as a painter is for Einar than for his wife Gerda (Alicia Vikander, “Ex Machina”). At a gallery, all the aristocratic men gather around Einar to praise his repetitive work, while the clearly more talented Gerda struggles to even get her work displayed. It’s not exactly a subtle commentary on gender inequality.

Soon after, we witness Einar and Gerda be very much in love, but when the subject of their courtship comes up in a conversation with friends, Gerda claims that kissing Einar in those early days was like kissing herself. Oh, the metaphorical implications! The movie becomes littered with such lines, constantly struggling to explain Einar’s existence and experience in superficially feminine terms.

Redmayne’s rotten performance doesn’t exactly help counter Hooper’s heavy hand. In the early scenes, the actor projects a deep voice for his scenes as Einar, but once Lili blooms, Redmayne adopts a breathy whisper. Like most things in The Danish Girl, it’s not necessarily a bad idea on paper, but the execution is just too loud, too obvious, too comically simplistic, as if Lili is nothing more than a pair of girly lips speaking softly.

Lili’s emergence begins when Gerda needs Einar to wear a dress as a stand-in model for a painting she’s trying to complete, which is then followed by a game of dress-up that allows the conflicted painter to finally confront who she truly is. As Lili moves to the forefront, Gerda tries desperately to stand by her partner through thick and thin, even though she misses Einar terribly.

This element of the story has potential and since the movie wants to be a love story more than anything else, there’s plenty of attention given to the challenges of continuing their relationship. But for all the impressive effort that Vikander puts forth, Gerda has little to do but be a Generic Supportive Wife™, a standard role in movies about married protagonists going through turbulent times.

The screenplay by Lucinda Coxon, adapting David Ebershoff’s novel, simply can’t find much for Gerda to do and Vikander seems entirely responsible for giving the character some personality in spite of how empty a vessel the character is written as. So then we’re back to Lili and Redmayne’s transparent performance, as blatantly straining to show the strings of his craft as any actor in a major role this year.

Lili’s story feels trivialized by Redmayne’s work here, which at least makes a startling companion piece with his much-maligned villain turn in the Wachowski’s action pic “Jupiter Ascending.” There, Redmayne played his strange role in an epically over-the-top key that lasted for the whole movie. He also vacillated between a breathy whisper and a more booming delivery, but for a colorful B-movie like “Jupiter Ascending,” the nutty loudness of the performance, the sheer theatricality of it all, felt justified. Here, it seems imperative that he achieve something more honest and true, something closer to a genuine human experience than a bid for awards attention.

Like Vikander, he’s let down by the script and by Hooper as well, though. At one point, Lili attends a peep show where he watches a woman sensually undress on the other side of a window. Bringing sexuality and sensuality into the conversation seems appropriate, but the whole point of the scene is to show how Lili is mimicking the woman’s movements, boiling femininity down to mere flowing hand gestures.

The Danish Girl certainly means well, but it’s a silly reduction of a serious subject. That it’s all hung on a bad lead performance further cripples its dramatic strength. If there are positives to take away, they lie in the evocative production design, bringing to life a quaint and intimate look at 1920s Copenhagen and Paris, as well as some excellent costume work. The clunky script actually benefits Hooper’s visual quirks, too, making his signature needlessly odd angles at least distractedly entertaining instead of the irritating distraction they usually are.

Hooper’s direction of the camera being more forgivable this time around simply illuminates how problematic everything else is, though. Pretty costumes and pretty buildings are fine support for a good movie, but they can’t do much to save a bad one. The Danish Girl makes puppets of its characters when it intends to make them human. And when it reduces them to symbols, well, Hooper gives us a final shot involving a representative scarf that should make everyone rethink the possibility that the movie might actually be a comedy. This story deserves more than to end up unintentionally funny. Hooper seems well aware that this is not a laughing matter, but he fails to capture that it’s not a mechanical one, either. 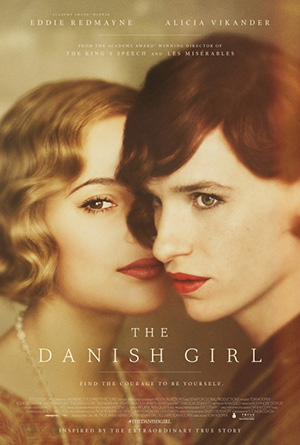