To call Eddie the Eagle an uplifting feel-good film is an understatement. This spectacular tale of human achievement tugs on the heartstrings of its audience, as it hilariously details the life and times of British skier Eddie Edwards.

This rare sports/comedy/drama matches the charm of its influence by focusing on the perseverance and humorous undertone of “The Eagle.” Director Dexter Fletcher (“Wild Bill”) does a tremendous job of balancing the three tones of the film, by carefully detailing each stage of Edward’s life, leading up to him representing his country in the 1988 Winter Olympics ski jumping competition.

Beginning at the childhood of Eddie’s life we are introduced to an exuberant kid with aspirations of being in the Olympics, (despite having an unexplained leg brace). So aspiring, that he leaves his home in the dead of the night to travel to the Olympics to the dismay of his parents. His unbridled enthusiasm as a child instantly wins over the hearts of the audience, creating a unique underdog personality.

After getting rid of his temporary handicap, we are treated to an upbeat training montage of Eddie simulating Olympic sports in his backyard. From weightlifting to javelin throw, Edwards fails at each and every sport, which timely introduces the audience to the films comedic tone.

As Eddie grows into his young adult self, (played by “Kingsman: The Secret Service” star Taron Egerton) his talent doesn’t seem to catch up with is growth. He soon concedes to his failures, gives up on his Olympic aspirations and joins his father in his plastering business (a position that is clearly unnatural for Eddie but is sensible to his conservative father).

Luckily for Eddie, he has a supportive mother who challenges him to keep striving for his goals. So after a very short stint of working with his father, Eddie comes up with another far-fetched idea. He decides that since he cannot participate in the “regular” Olympics, he will attempt to join the Winter Olympics as a ski jumper, as he was already an established skier.

Without hesitation Eddie makes a drastic choice to immediately move out of town near a ski resort to begin training on his own. He steals his fathers van and travels hours away on a hunch that if he challenges himself, he can realize his goal.

But if only it were so easy. Lack of discernible talent is one obstacle, but what underdog story is complete without clichéd rivals and naysayers? Eddie the Eagle provides many for Eddie to face off against, but what’s surprising is not only did most his family and all his peers and competing ski jumpers doubt him, he was actually doubted by his country’s Olympic committee.

The committee, actually, constantly blocked Edwards from participating, even when he was just as qualified as everyone around him. Sure, his style was unconventional and he was quite clumsy, but he did not deserve the dismissive treatment he received. He was for all purposes pure-hearted — he never had any ulterior motives — all he wanted to do was participate.

To finally make that happen, Edwards seeks out an experienced skier to give him confidence and intangible skills to send him to the next level. Unfortunately, that’s not what he finds; instead he gets former skier and current alcoholic Bronson Peary (Hugh Jackman, “Pan”). Peary, to his credit however, was a winning ski jumper for the United States Olympic team and was even trained by well-regarded ski jumping coach Warren Sharp (Christopher Walken, “Jersey Boys”). It doesn’t take long for Peary to see a passion in Edwards that he didn’t have at his age. This spawns a mentor/protégé relationship that reels the audience in and forms an emotional bond. Jackman and Egerton should be praised for their impressionable chemistry on screen, which seemed almost effortless.

After a strenuous amount of training — along with an almost absurd amount of adversity — Edwards finds himself as the sole representative of his country in the 1988 Winter Olympics. He begins to become a worldwide rags to riches story; fans love his relatable, casual personality. To his displeasure though, his introduction to fame doesn’t bring with it recognition from his peers. He is further shunned by them, and now, even loses some of the support of his mentor.

Yet again, instead of becoming comfortable with his new-found fame or calling it quits, Edwards sees this as a competitive sign. He intends to earn his position even if it kills him and so without anyone’s instruction to do so, he enlists to participate in the hardest competition that the Olympic ski jumping sport has to offer: The 90 meter jump.

This extremely difficult task has only been attempted by the best skiers the world has ever seen, let alone completed. At this point Edwards has already attained injuries for jumps that were half as difficult as this one. None of this stops Eddie — he has this inner motivation that is so greatly displayed by Egerton, that you almost feel as though you’re watching this event happen in real-time and rooting for him will somehow bring him success.

Without giving away the ending of the film, I can say that Eddie the Eagle pulls a familiar, uplifting emotion out of the audience that hasn’t been this uniquely displayed in some time. Fletcher’s directing style took advantage of the film’s visually compelling moments, the ski jumps were beautifully filmed and edited. He also does a great job of making the film’s pacing seamless, each stage being completed in the perfect amount of time to progress the story. The cast is experienced, the plot is solid and overall, not only will you enjoy this film, you’ll remember it. And most importantly you’ll remember Eddie “The Eagle” Edwards. 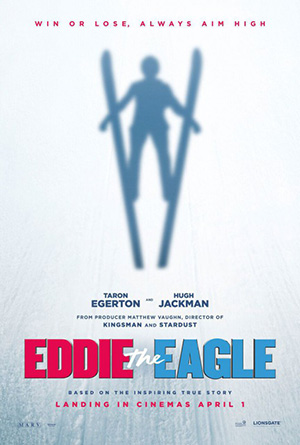