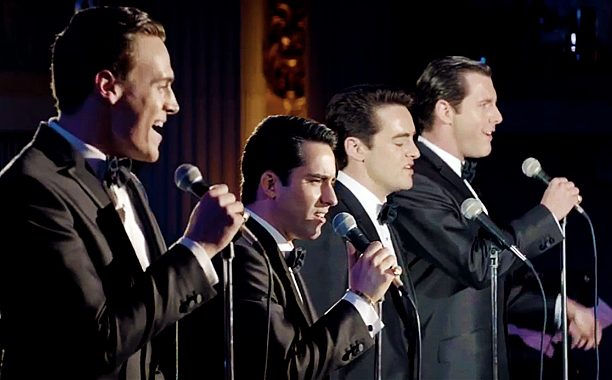 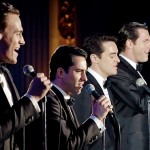 A movie musical based on a stage musical built on pre-existing music certainly has some of its work done for it right from the point of cinematic conception, but even with such a head start, Clint Eastwood still applies enough tender, heartfelt identity to his adaptation, Jersey Boys, to make the screen version a touching endeavor. While a pedestrian effort at times, the movie benefits from Eastwood’s slick traditionalist style and likable leads. Tom Stern’s reliable photography nicely illuminates the period settings, first by bringing light to the ragtag group’s dingy neighborhood beginnings and later by capturing the glitz and glam of neon-lit fame. Even though the pieces come together somewhat clumsily at times, Eastwood’s steady hand steers the picture to a comfortably satisfying place where the music — the true focus of the piece — rings sweetly through the speakers.

Adapted for the screen by the original stage production’s writers Marshall Brickman and Rick Elice, Jersey Boys adopts a bubbly, playful attitude to tell the story of 60s pop rock band The Four Seasons. It all begins with a couple of Jersey kids who can’t help but get themselves in trouble with the law. Frankie (John Lloyd Young, reprising the role that won him a Tony on Broadway) is a good kid surrounded by bad influences, but little excuses are made for his poor decisions. In fact, the shenanigans are generally supported and played for laughs, which is understandable when Frankie finds himself the getaway driver of a car so weighed down by the stolen safe stashed in its trunk that the whole front of the vehicle is angled up to the sky. Frankie squeals around blindly for a moment before promptly smashing through a jewelry store window. A brief shot illustrating Frankie’s point of view plays up the comical silliness of the situation.

The “aw shucks” nature of the tone downplays the seriousness of the crime, but it’s clear that the fateful night has landed Frankie and pal Tommy (Vincent Piazza) at a crossroads. They’re headed down a dangerous path and Jersey Boys is about what ultimately saved them. As time goes by and prison sentences end, the boys turn more to music as a money-making venture. It’s a shared passion and while they don’t exactly mature overnight, they’re committed enough to the sound of their voices and instruments to trudge through the challenges of hitting the big time.

Ties to the mob, represented here by nice guy Gyp DeCarlo (Christopher Walken), are ever present, but the emphasis is less on preaching about the evils of organized crime or even glorifying its lifestyle and much more on praising the family-focused values. Even the wise guys are decent, friendly individuals who settle conflicts with pleasant talks instead of fisticuffs. It all adds to the likability factor without softening the edges to the point of parody. Eastwood makes this world believable mainly because he trusts his actors to convincingly sell it. Things get a bit too cute, though, when Joseph Russo shows up playing Joe Pesci (yes, the Joe Pesci, as Tommy makes directly clear) as a sort of tagalong to the band. An ill-conceived “Goodfellas” reference comes with him and feels like a weak wink at best.

But the main cast members, including Michael Lomenda as Nick and Erich Bergen as Bob, have chemistry and as the group slowly takes shape after cycling through a half dozen band names, the movie starts to find its voice. Much of the thanks goes to the music, of course, but it’s Brickman and Elice who provide the context that proves necessary to generate an emotional framework for the songs and it’s Eastwood who keeps the big screen pieces moving in unison. Of course, it’s also Brickman, Elice, and Eastwood that allow the story to become occasionally bogged down in clichéd conflict as the plot chronicles the usual ups and downs that bands face as fame and fortune starts to come their way.

It’s fair to shrug this off as true to the experiences of the Four Seasons band members, but while their experiences predate other experiences already covered in previous movies, the sense that the movie is predictably going through the familiar motions is a difficult one to shake. But then, just when the movie most needs a spark, the boys gather round to sing the first few lines of Sherry and the picture starts to soar. The effort to put faces to the voices pays off as the birth of a hit comes to life on the screen. We simultaneously share in their joyous accomplishment and feel the rush of the fans, suddenly discovering a new sound. 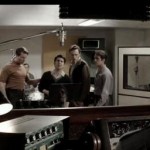 This launches the production into an aural assault, hurling hit after hit at us as the group heats up the charts. Eastwood does a fine job of capturing the musical performances and their ensuing buzz, mainly thanks to the actors who all have a natural stage presence and impressive voices to boot. Each band member character has a distinct personality and the ways in which they interact suggest a brotherhood that’s constantly threatening to implode. The potential volatility helps power Jersey Boys through its later stretch, where tensions rise on cue and the story hits its basic beats somewhat mechanically.

Frankie’s family life contributes to the conflict, but only in spurts that make these detours feel like an obligation instead of an important addition to the dramatic momentum of the picture. Even then, familiar as the tale of a musician who only has time for his music is, the story is arguably one worth telling and Eastwood gets through these bits well enough. The occasional river of treacle that runs through the proceedings is a bit much, though.

Like the band it worships, Eastwood’s Jersey Boys has its ups and downs, but manages to sweetly favor the former overall. A certain cinematic flair could be more prevalent at times, but what actually makes it to the screen still greatly enriches the experience. One shot of the camera scaling the exterior of a recording studio, with each floor featuring an audition in a different style, is amazing and possibly one of the most dazzling shots Eastwood has delivered in years. A stagy final number that doubles as the end credits sequence is a nice mix of theater and cinema that sends us on our way with an upbeat, energized sensation reverberating through our seats. Most of all, Eastwood supports the music and the soothing sounds lift the movie, if not quite to the rafters, then certainly off the ground. 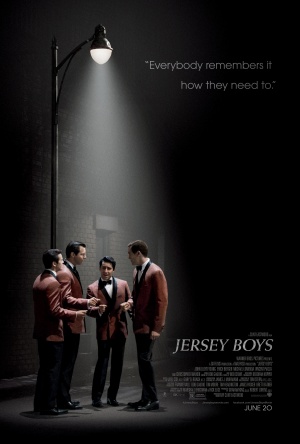