A group of students entering into the shady confines of the woods is a familiar horror premise that we all recognize, not least of all in what has become the very embodiment of the idea; “The Blair Witch Project.” However, Peter Callow’s The Circle manages to keep its own sense of originality whilst drawing from its predecessors. The film evidences its debt to the sub-genre of found footage by opening with a taped recording of Paul Lockwood (played in a “blink and you’ll miss him” moment by Ross Noble, “Nails”) a camper who has pitched his tent out in the wilderness. The footage is interrupted by a series of short and distorted sounds which serve to solidifying the eerie tone that will be sustained for much of the films duration. Wondering whether the ensuing 93 minutes will focus on the purpose of Lockwood’s expedition or what became of him, our expectations are soon challenged and flipped as we begin a new narrative.

Four teenagers and an archetypal college professor (Edward Baker-Duly, “Welcome Home”) are taking an archaeological field trip to a remote island off the coast of Scotland. However, what begins as an innocent academic excursion soon evolves into more of a nightmare boot-camp following a series of mysterious occurrences. Alongside model student Melody (our sensible and studious protagonist played by Sesselia Olafs, “Night Bus”) is the inattentive, but deeply likable, Joe (Griffin Stevens, “Brimstone”) whose objective is to rekindle a previous relationship held with Claire (Eva-Marie Kung, “No Code”), a carefree blonde who doesn’t take the academic side of things too seriously and finally Archie (Colin Burnicle) who although smart and diligent, lacks the intellectuality of class-mate Melody. Upon arrival, not at their intended location but at what turns out to be an area of far greater interest they discover a Nordic site of worship which, once disturbed, becomes a playground for all manner of dark activity.

The set-up is nicely contained with Callow addressing necessary practicalities that require checking off such as why phones fail and how (even with a responsible Professor guiding them) the group manage to get lost. To its credit the film balances heeding enough attention to such matters whilst also resisting the temptation to tread too closely to well-known tropes. Unexplainable events and odd encounters are peppered throughout the first chunk of the film with the groups’ journey from the port to the island being led by a suspiciously hostile fisherman, contributing towards an unnerving certainty that things are about to go very wrong. As the story evolves, we are provided with periodic set ups, scenarios and dynamics that feel believable but are then cleverly subverted working to keep our expectations in constant check. What this also achieves is a shift in audience-character allegiance particularly for Joe who is early on left affected by a revelation of a personal nature.

The action moves at an engaging pace and instills fear through a combination of the group beginning to fracture (depicted in scenes we’d recognize from our everyday lives) and the mysterious Norse mythology that underpins their findings. The site of a collection of rocks buried half-way into the ground form the literal circle (or stone circle) of the film’s title, but the circle also holds a specific power that the students need to understand in order to increase their chances of survival. In addition to their findings, they also uncover a brick well which creates a sufficient amount of terror, particularly when an unexpected entity emerges from its depths. We watch as the students decipher symbols, reveal coded messages and (when the threat comes) form defense tactics to ensure they make it through the night. What this also means is that the audience experiences the horror of what’s unfolding in real time along with the characters allowing us to establish enough investment and rapport with them to keep us interested.

As the group begins to divide and separate, they simultaneously weaken and become the hunted prey of ghost-like spectres and Gothic creatures. A natural pairing, Melody and Archie find themselves witness to a horrifying spectacle and in a pivotal moment discover a video camera belonging to a previous visitor of the woods. Back at camp, they watch the footage on a laptop and we watch the full gravity of their situation spread slowly across their faces.

Arriving at the final act, the mundane and conceivable make way for supernatural developments and it’s here that the film stumbles, albeit slightly. The horror of the real proves unsurprisingly more effective than that which features monsters or creatures, but having said this there are a few undeniably heart stopping moments which force you to either move closer to, or further away from the screen. An unnecessary plot twist that is crammed into the climatic scene weakens the lasting impression of the film and hints at a lack of faith in the original concept. However, this is unfortunate rather than destructive to the general experience. The thing to remember, says Professor Karl to his students, is that: “Archaeology is fun,” and although its not breaking any new ground, The Circle is certainly that. 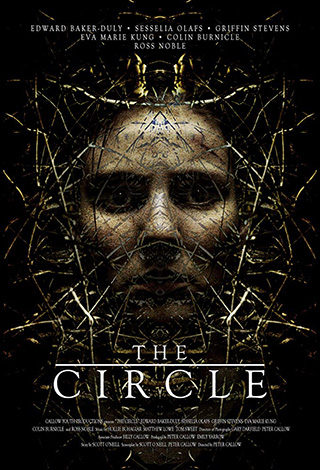