Kate Mandell (Mackenzie Davis, “Terminator: Dark Fate”) leaves her teaching job and the coziness of a shared apartment with her friend Rose (Kim Adis, “Krypton” TV series) to take on the role of “personal tutor” to a young girl, Flora (Brooklyn Prince, “The Florida Project”). Her role is emphasized as that of “tutor” as opposed to “governess” or “nanny” as Rose jokingly calls it before being corrected which is an early attempt towards the film’s overall unsuccessful attempt to modernize Henry James’ timeless novella The Turn of the Screw.

Upon arrival, Kate is aghast at the magnificence of the stately home in which Flora resides, set among vast gardens and a (no doubt metaphorical) maze. Haughty and humorless Mrs. Grose (played with a wonderful balance of authority and delicate fearfulness by Barbara Marten, “Oranges and Sunshine”), provides a frosty reception and explains that Flora was witness to a car accident at the gates to the property which resulted in the death of both her parents. Flora’s elder brother Miles (Finn Wolfhard, “It”) soon joins them following an expulsion from boarding school and it quickly becomes apparent that there is a troubling and unsettling force within the siblings as they play up and act out on multiple occasions. As an outsider and a natural caregiver, Kate tries to navigate and understand their behavior whilst also coming to terms with the trauma of her mother’s ill mental health and what this might mean for her own state of wellness.

Unfortunately, The Turning does not withhold any information in its early stages which limits the potential for multiple explanations. Therefore, in this respect it fails to achieve what should be its two key objectives: Creating suspense and evoking horror. The introduction of Miles is one such example; whereas in the novella and the mesmerizing 1961 Jack Clayton film “The Innocents,” the governess character learns of his expulsion (crucially ahead of his arrival) via letter, here director Floria Sigismondi (“The Runaways”) has him return home to surprise his family who have no prior knowledge of his wrong doings. Unfortunately, this removes any tension that might have existed around who Miles is and why we (or Kate) should have cause to be concerned about him had we been aware of his homecoming. Significant also is that while Sigismondi has Kate discover the reason for Miles’ expulsion (via a telephone call to the house) both Clayton’s film and the novella never reveal just what it is he has done to be punished so severely. When told in this way, the possibilities become endless and as all keen horror fans are aware: What we can create in our imagination is far more harrowing than any explanation a writer or director can provide.

Despite falling short in certain areas, however, the film is always engaging and is not afraid to use color which is a refreshing change from the grainy, verité aesthetics or the dull, brownish palette that dominates the genre. The performances of the children (which can often be over acted, clichéd or downright annoying) are perfectly pitched with Brooklyn Prince conveying a sense of playfulness and naiveté which is juxtaposed by Wolfhard’s cockiness and underhanded sarcasm. Importantly, there is also plenty of chemistry between the two youngsters and Kate including a particularly touching scene between her and Flora about putting on a “brave face.” As the film advances though, it becomes less coherent and more unsure of whether it is telling the story of the children or that of Kate and her mother (Joely Richardson, “Red Sparrow”). This inability to choose one narrative results in the arrival of an ending that is so surprising and ill fitted that I was convinced the rolling credits were not to be trusted and a final more consolatory act would shortly follow (it doesn’t).

The Turning is determined to separate itself apart from the original source of Henry James’ widely loved novella, The Turn of the Screw, from the early shots which show scenes of Nirvana frontman Kurt Cobain lying lifeless on a television screen to scenes of Rose making mix tapes. However, not only does it have the text to contend with, but also the hauntingly captivating and ambiguous Jack Clayton film adaption as well. With such mighty ghosts looming in the background, Sigismondi has the unenviable task of either culling the effective elements of previous incantations or to ignore them completely. Regrettably for viewers, she chooses the latter. In doing so she sacrifices ambiguity and the enigmatic qualities that live in both the Clayton film and James’ text and it’s precisely these elements which make them so profound and deeply captivating. The Turning, sadly is neither. 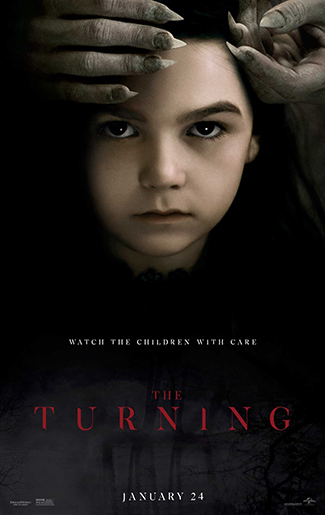