Bram (Ben Platt, “Ricki and the Flash”) is a keen journalist who is stuck working for a small-time newspaper writing lists of recommendation when his heart is set on tackling hard hitting new stories. In addition to writing The List, (such as where to eat the best hot dog), he is also reporting on the whereabouts of the city mayor in the hope that he will uncover a breaking story on his slippery and elusive character. Despite throwing out continuing pleas for some serious work Bram is repeatedly told he lacks experience, but the tide takes a decided change when he is contacted by a member of the local community claiming to have a damning video of the mayor in their possession. This is the break that Bram has been waiting for, but with many obstacles to navigate along the way including the police, staff at the mayoral office and the hierarchy of his own workplace, has he underestimated what is needed to get that all important scoop?

Run This Town tackles some weighty issues around power and complicity that resonate deeply and presents us with a complex set of characters who we cannot easily categorize as being either wholly good or bad. As the audience surrogate, Bram is played with genuine warmth and wide-eyedness by Ben Platt which makes him an easy hero to root for. As he tentatively approaches potential sources he is always softly spoken attaching polite remarks such as, “if you ever get the time” to his inquiries for information and in this respect there is a strong sense that he is just not cut out for the bustling world of journalism. However, he remains so plucky and determined throughout that its impossible not to disagree with him when he asserts, “I cant show you what I can do unless you let me do it.” Unfortunately for Bram he is a small pawn in a much larger and more strategic game of chess that plays out beyond his control. Within his own workplace he is systematically caged in, encouraged and then shot down by his manager David (Scott Speedman, “The Captive”), who is skeptical of Bram’s capabilities and the chief dditor Judith (Jennifer Ehle, “I Kill Giants”), an icy, straight talking woman who has seen it all.

Although Bram is clearly the every-man who we channel our focus and hopes into, the most effecting narrative exists in the mayor’s office where Rob Ford (played with the right balance of loathsomeness and charm by an unrecognizable Damien Lewis, “Your Highness”), an unpredictable egotist reins tyrannically over his group of young “special assistants.” Rob answers each call to his office by personally going to visit the constituent who makes them, giving the outward impression that he cares deeply about the common good. It quickly transpires that this is all a veneer which masks the abhorrent attitudes and behaviors he exhibits behind closed doors. Rob’s team of staff are subject to his excessive drinking, aggressive verbal attacks and even become victims of sexual assault. His unchecked behavior and lack of self-awareness resonates sharply, particularly after the recent conviction of Harvey Weinstein. When the threat of the incriminating video is made public and thus the mayor finds that his job is on the line, his first concern is whether the little league that he is a part of will still want him as their coach and he promptly requests for a pizza date to be arranged with them. There is then, no sense of accountability for the consequences his actions have on others and instead he turns the focus inwards in a chilling attempt to make himself the victim.

What is also disheartening (albeit on a different level) is the breadth of complicity; during an attack on one of his special assistants, Ashley (Nina Dobrev, “The Final Girls”), the room is full of colleagues that stand by just watching both during and after her ordeal. She will later ask her boyfriend Kamal (Mena Massoud, “Aladdin”), who was present at her attack, why he did nothing to protect her but more specifically why he didn’t say anything to her about this afterwards. The terrifying notion of not being believed or acknowledged as a victim is built upon further in a later scene where she reports this to the police and upon finding out that she had been drinking one officer declares, “I know when I’ve had a drink I remember things differently,” this loaded comment operating to minimize her trauma, suggesting that her experiences are not authentic.

On the whole, the film moves at such a fast pace, has such an extended cast of characters and is attempting to cover such a broad range of heavy issues that it can be difficult to keep up with what’s happening, ascertaining how characters relate to one another and knowing what its main point of focus is. The frequent use of split screens which has no demonstrative meaning or purpose also serves to break up the action and absorption in the story which is unwelcoming. However, the ensemble cast give well rounded performances that pull you into their world with Jennifer Ehle being particularly magnetic as the steely chief editor of the paper. Although Run This Town tries to over-complicate its narrative, at times it also counterbalances this by succeeding in creating some genuinely powerful and lasting moments. If only there were more of them. 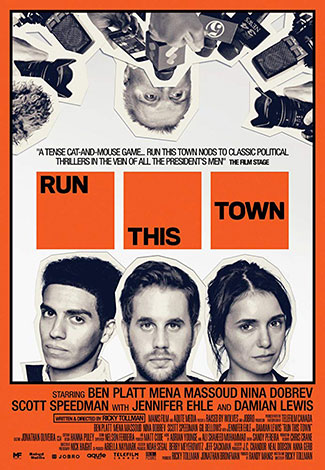