Depending on your tolerance for redundancy, there’s a surprising amount of fun to be had in Disney’s Guy Ritchie-helmed Aladdin remake. That’s a far cry from the disaster this could have been and seemed destined to be at one point, considering a laundry list of potential issues ranging from the source material that casually mixes cultures to the looming specter of original scene-stealing star Robin Williams to the fact that Ritchie has a history of turning in violently macho duds (“King Arthur: Legend of the Sword” being the latest).

But Disney, the insatiable studio currently gobbling up its Hollywood competition, especially excels at asset management, so the pieces have been assembled here with a particular and inoffensive amount of care. Having already laid the groundwork for a boisterous, colorful musical fantasia with their famed 1992 “Aladdin” adaptation, Ritchie and his Disney overlords find themselves in the position of having to merely update some of the bricks built atop an already sturdy foundation.

It’s not an easy task, considering the gaping hole Williams’ death has left behind and the need to breathe flesh-and-blood life into previously celluloid animated characters, but it’s an easier task than starting from scratch or working from a deeply flawed original. Despite its issues, the 1992 “Aladdin” is an extremely entertaining romp kept buoyant by Williams’ astonishing hyperactivity and the wonderfully catchy songs that Alan Menken and Howard Ashman wrote.

This Aladdin is predictably familiar, with much of the same music, jokes, images, and conflicts, but with just enough tweaks in various nooks and crannies of the tale that there remains room to have fun with the task at hand. Known for his overly frenetic style, Ritchie brings a cartoonish energy to the adventure here and that helps bridge the gap between animation and live-action that previous Disney remake “Beauty and the Beast” awkwardly struggled with.

Musical sequences like the early “One Jump Ahead” effectively blur the lines between what is achievable with actual actors on sets and what can be accomplished with the elasticity of animation. This sequence, acting as an introduction to both Aladdin (Mena Massoud, “Ordinary Days”) and Princess Jasmine (Naomi Scott, “Power Rangers”), is an effortful homage complete with slow-motion, sped-up action, slick stunts, and splashes of color.

Ritchie is aided by having such a solid template to work from, but considering how awful a match of filmmaker and material this once appeared to be, the sequence operates as an immediate dispelling of any doubts. Peppy panache goes a long way to capturing the Disney spirit and Ritchie has pep in spades here.

He’s more than matched in that department by Will Smith (“Suicide Squad”), whose charm factor is cranked up to maximum levels and at its most potent when the actor is not saddled with dicey CGI to turn him into a humanoid poof of blue smoke. Smith wisely avoids aping Williams’ signature style while maintaining the Genie’s inherently enthusiastic and well-rounded entertainer vibe.

Having someone that is equally charming and likable to bounce his madcap energy off is an effective way of accentuating Smith’s performance and so he receives great support from Massoud, who captures both the wily spirit and wounded heart of the titular hero. Attempting to shine in the shadow of Smith’s mega star wattage should be a tall order for someone with only a few credits to their name, but Massoud makes it look easy by exuding a wealth of warm confidence.

Rounding out the trio of well-cast leads is Naomi Scott, who stuns as Jasmine with her exquisite poise and soaring voice. She expertly embodies the iconic Disney Princess, but adds additional weight by belting out a solo tune in which she sings of refusing to be silenced. This Jasmine also has higher aspirations than her cartoon counterpart. Instead of merely craving some fresh air outside the walls of her father’s palace, Scott’s version wishes to be sultan, a position she should be owed by birthright, but is denied due to her gender.

The move to expand Jasmine’s motivation heightens her arc by giving the character a more meaningful goal to aim for and further personalizing her journey even after Aladdin shows up ready to woo her. It’s that part of the story where Massoud and Scott especially shine. They share genuine chemistry that lends their romance a gentle air of authenticity.

Massoud and Scott are (so far and by far) the best romantic pair found in Disney’s growing live-action remake lineup and that goes a long way to conjuring some of that vital and vibrant fairytale magic. Strong casting in a familiar movie can really smooth the edges and make for a pleasant experience that avoids the otherwise perilous pitfalls of an unnecessary remake, so having Aladdin and Jasmine played by such lithe, likable performers solves a lot of the movie’s potential problems before the issues can take hold.

Ritchie has logged enough hours on blockbuster productions that the overly computer-assisted set pieces are acceptably executed and a dash of Bollywood influence during some song-and-dance numbers is appreciated for its visual verve. Musicality is such an important aspect of Disney’s animated classics that seeing the screen-to-screen adaptation achieved without losing that elegant element is sweetly satisfying.

In the end, once the trail of blue smoke has dissipated, the charming effect of this new Aladdin mainly goes with it. Redundancy doesn’t exactly inspire longevity and Disney doesn’t build these remakes to last. They’re merely grand refreshers in the company’s long line of iconic properties. But despite the studio’s transparent motives, Aladdin remains a showcase for three very talented performers who reinvent their characters with such charm that the callousness of Disney’s remake enterprise feels momentarily outmatched. 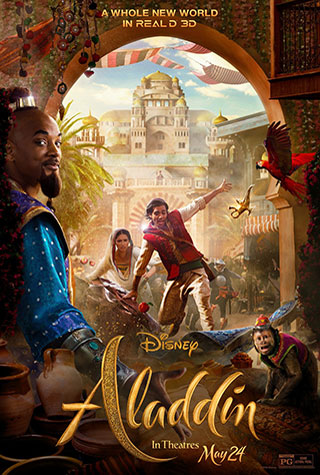