The Beatles are one of the most iconic, influential and beloved musicians, or indeed creative artists, of all time. As well as producing such bestselling albums as “The White Album,” “Abbey Road” and “Sgt. Pepper’s Lonely Hearts Club Band,” the Fab Four have been the subject of films, books, museums and anecdotes. They put Liverpool on the cultural map, and every year thousands of tourists flock to this northern English city, demonstrating that Beatlemania remains alive and well. Even if you are not a fan of The Beatles, the likelihood is that anyone familiar with western popular culture will have heard of them.

But what if only you knew about them? What if you had unique knowledge and recollections of the music and lyrics of Paul McCartney, George Harrison, John Lennon and Ringo Starr, and had the opportunity to introduce the world to this phenomenon. This “what if?” forms the premise of writer Richard Curtis and director Danny Boyle’s Yesterday, a romantic comedy about desire, fame and what music means to people. Jack Malik (Himesh Patel, “Damned” TV series) is a budding musician who has never hit the big time. Ellie Appleton (Lily James, “Little Woods”) is his long time/long suffering manager/roadie/best friend/source of motivation. During a global blackout, Jack has a cycling accident and wakes up to discover that no one knows about The Beatles other than him. Despite his best efforts, talking to all manner of people and intense Googling yields no results other than insects. Jack is then able to pass off such classics as “Yesterday,” “Let It Be” and “Hey Jude” as his own, and as “his” music is noticed he becomes the biggest music sensation since, well, ever.

The film’s treatment of fame is fairly superficial, aside from a couple of scenes that feature rabid fans seeking Jack, and Kate McKinnon’s (“Rough Night”) turn as Debra Hammer, an extravagant manager standing in for pretty much the entire venal, all-consuming music industry. Playing himself, Ed Sheeran is unassuming and graciously acknowledges music better than his own. Meanwhile, Jack maintains humility, largely due to his (unique) reverence for the music. This ensures that he remains sympathetic, rather than becoming arrogant or expectant of those around him. On the downside, the film lacks bite and also the visual verve of other Boyle efforts. The viewer may find that they miss the effervescence of “Trainspotting” and “Slumdog Millionaire,” as well as the immersive visuals of “Sunshine” and “28 Days Later…” Sequences of Jack before huge screens that display his trending on social media point to the kind of surreal head trip this film could have been, had it been an exploration of fame and its effects like recent music biopics such as “Bohemian Rhapsody” and “Rocketman.” This is not that film, but it does lack the energy and incisiveness that such a movie might have had.

Overall, Boyle’s style seems at odds with the whimsy of Curtis’ script, which echoes his earlier efforts such as “Notting Hill,” “Love Actually” and “About Time.” There is a fundamental disjunction between the major creative forces here, as whether dealing with inscrutable minds (“Steve Jobs”), intense experiences (“127 Hours”) or twisty schemes (“Trance”), Boyle excels at conveying the mental experience on screen, drawing the viewer into the worlds of his characters. Curtis is more stand-offish, presenting characters, particular societal niches (such as the very “Curtis” England of his previous writing and directorial efforts) and concepts without exploring them in great depth. This is a problem in Yesterday as there is a certain amount of “Yes, and what does this mean?” and “Where are we going?” in response to what we see. While Jack is an amiable enough protagonist, he barely changes over the course of the drama, beyond one fairly obvious and frankly labored plot point.

This point relates to the more pernicious problem represented by the character of Ellie. In the role, James is fine, offering an effective balance of compassion and fiery wit. But Curtis does not have a great track record with female characters, and Ellie is largely defined in terms of her relationship with Jack. Largely platonic but with suggestions of romance, there is an annoying element of Ellie waiting for Jack to see her the way she sees him. It is pleasing to see the possibility of a relationship that would be inter-racial without race being an issue, a colorblindness that is furthered by not “othering” Jack’s parents Sheila (Meera Syal, “The Nutcracker and the Four Realms”) and Jack (Sanjeev Bhaskar, “Absolutely Anything”). All of these characters are not racially delineated by accent or the décor of their homes, allowing for multi-racial presentation of British culture. Despite this progressive racial element, the problems with the film’s gender politics feel lazy on Curtis’ part — how hard would it have been to give Ellie an alternative arc?

These problems are less apparent if one has particular affection for the songs, and at times they do help the film to fly. Jack’s singing sequences are energized and enthralling, partly due to his evident passion but also Boyle’s inclusion of audience reactions. While there can be a tendency to let iconic music speak for itself, as in the aforementioned “Bohemian Rhapsody,” in Yesterday the focus is less on the songs themselves as their effect on people. Clearly, the film suggests, this music is a mental tonic that elevates spirits and hearts, regardless of who performs them. Perhaps this speaks to budding musicians as well, reminding them that they can deliver great joy whether performing at Wembley Stadium, Latitude Festival or a local pub.

On a side note, for an inhabitant of East Anglia, it is very pleasing to see the under-represented towns Lowestoft and Gorleston on the big screen. After Yesterday and “Fighting With My Family,” East Anglia’s cinema presence is increasing and, for an admittedly small demographic of viewers, this is a pleasing pattern. Yesterday is far from a perfect film, and non-Beatle fans may appreciate the fuss but find it hard to engage with. Nonetheless, its leads are charming and engaging, and there is significant amusement in noticing what else everyone other than Jack has forgotten. Anyone fancy a Coke? 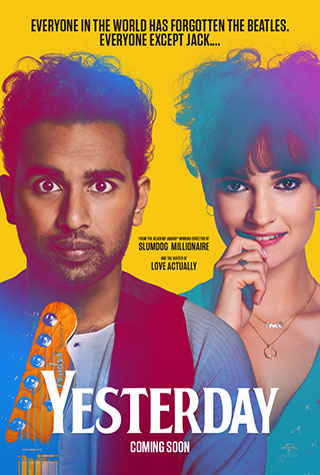