For anyone willing to get into the Christmas spirit immediately after Halloween (that would be me, at least this year), there’s the arrival of Disney’s festive fantasia The Nutcracker and the Four Realms to help ease the transition from one treat-filled holiday to another. The title may be a mouthful, but the movie is a morsel-sized, mildly enjoyable adventure that vacillates vacuously between flavors of sweet and sour.

After a digitally dodgy fly-through of Victorian London at Christmastime, we’re introduced to clever teen Clara (Mackenzie Foy, “The Conjuring”), a lover of physics and hater of opulent balls where your stuffy father (Matthew Macfadyen, “The Three Musketeers”) stuffily insists that you dance with him. Clara’s mother has recently passed away and a darkness hangs over the Stahlbaum home, but the family must keep up appearances, so Clara is forced to attend a lavish party thrown by her sagely godfather (Morgan Freeman, “Going in Style”).

As if having to fake a smile in the midst of choreographed group dancing wasn’t enough to ruin Clara’s night, her deceased mother’s final Christmas gift to her turns out to be a mysterious box with no key. Fortunately, anyone with even a vague understanding of, well, stories, knows that what lies ahead is a quest to find that key, preferably in . . . hmm . . . a magical world, perhaps?

Audiences get their wish when Clara wanders down a dark hallway and exits through a hollow tree, suddenly finding herself in a winter wonderland, where she soon meets a friend and discovers that sinister forces are lurking nearby. If this all sounds somewhat familiar, then you’re not alone. Clara’s adventure is clearly inspired by another iconic children’s classic, even if it doesn’t want to admit it.

The Nutcracker and the Four Realms is an easy movie to poke fun at, since Disney is just combining elements of profitable properties that have already brought them big bucks (in addition to “The Chronicles of Narnia: The Lion, the Witch and the Wardrobe,” there’s an inherent “Alice in Wonderland” influence as well), and it’s worth noting that the family-friendly studio’s insistence on returning to the dead mother trope now borders on obsessively morbid, but there’s an earnest innocence at play here that’s endearing enough to be acceptable.

Foy has an angelic adorability that makes her a fine fit in a tale of dolls come to life and yet she brings a toughness to Clara that generates a spark of cool courage. She’s a likable heroine ready to take on whatever stands in her way, which in this case includes scurrying flurries of mice and an army of tin soldiers. Her friend is the stoic Nutcracker (Jayden Fowora-Knight), a guard who leaves his post to escort Clara on her journey, but thankfully doesn’t require her to adopt a damsel-in-distress role in order to be of some use.

Excitement comes in the form of some dazzling visuals, especially in the titular Fourth Realm, a forbidden area that is comprised of a gnarled forest set and a dilapidated amusement park overseen by Mother Ginger (Helen Mirren, “Winchester”). Another memorable location visited in the fantasy world is an appropriately Russian-inspired palace where the squeaky-voiced Sugar Plum Fairy (Keira Knightley, “The Imitation Game”) resides.

It is there that Clara is treated to a lovely ballet performance that chronicles the history of this dreamy place. As far as doling out exposition goes, there are far worse ways to get the point across than photographing Misty Copeland dancing on a stage. The inclusion of the ballet and a score that is tied heavily to Tchaikovsky’s legendary compositions are nice touches that honor the history of the Nutcracker material and provide an experience that is not often had in modern children’s movies.

For all the gentle ribbing The Nutcracker and the Four Realms deserves for being so derivative, there’s charm and cuteness on dutiful display and the imagery is worn like a warm blanket. The cast works pretty well, while Knightley especially shines in an oddball turn that has her munching on her own cotton candy hair and being unusually excited about literally empty-headed men in uniform.

Above all, The Nutcracker and the Four Realms is a simple adventure with familiar lessons. Believe in yourself! Treat others well! Don’t get mad at your father because he’s mourning the death of his wife! Stuff like that. And through it all runs a nostalgic fondness for holiday celebrations. If you happen to be in the holly jolly mood already, then this colorful cinematic confection will likely tide you over until it’s time to watch some actual Christmas classics. 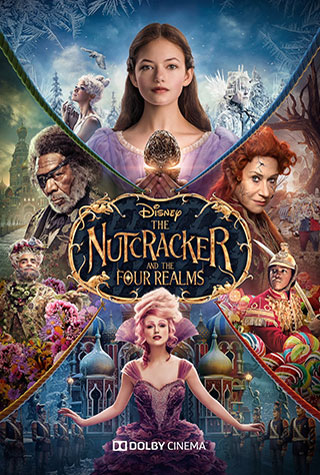 The Nutcracker and the Four Realms (2018)