In 1906, in San Jose, California, an impressive, intimidating, and haunting construction project is underway — in fact, this never-ending project is worked on 24 hours a day. After the deaths of her husband and infant daughter, Sarah Winchester (Helen Mirren, “Eye in the Sky”) began ordering renovations on the family home. Heiress to the Winchester rifle fortune, Sarah has earned a reputation for eccentricity, and the stockholders of the Winchester Repeating Arms Company have hired Dr. Eric Price (Jason Clarke, “Dawn of the Planet of the Apes”) to evaluate her mental state, hoping he’ll agree she’s crazy so they can take over her half of the business.

Arriving at the sprawling seven-story, over 100-room mansion, Price is overwhelmed by labyrinthine hallways, stained glass windows, ornate woodwork, and beautiful light fixtures. He is warned by Sarah’s niece, Marion (Sarah Snook, “Steve Jobs”), to remain in the east wing and attend carefully to Aunt Sarah’s rules of the house. Upon meeting the enigmatic Sarah, Price asks why she continues building and rebuilding rooms, and she confesses to seeing shadows of tormented souls: “I feel them — their presence. Their energy, their unfinished business has brought them here.” She tells Price that unsettled souls find their way to her home and at night, communicate plans for new rooms, plans she draws in exquisite detail and hands over to the construction crew each morning. When the rooms are finished, the souls inhabit them to find peace before finally passing over, however, some of these spirits are angrier and stronger than others, and these are trapped in their rooms using 13 nails to seal their doors.

As Price explores the house at night, he travels hallways full of these closed-off rooms, and tries to rationalize Sarah’s mental state and his own increasing visions in the house. Meanwhile, Sarah’s great-nephew Henry (Finn Scicluna-O’Prey) begins to suffer nightly attacks — he’s sleepwalking through the house, a glazed white film over his eyes, and after he is almost killed stepping from the landing of an unfinished room, Price, Marion, and Sarah try to determine the best way to save him from further harm. Doubting his own faculties, Price hears echoes through the communication system and spies movements in the shadows. Though he tries to explain it all away, their increasing intensity makes him wonder whether Sarah’s mental state is more stable than the stockholders believe.

Written by Tom Vaughan and brothers Peter and Michael Spierig (who also direct), Winchester is based on actual events and the real Winchester Mystery House which boasts approximately 160 rooms and now stands at four stories (the top three stories were brought down by the 1906 San Jose earthquake). Under construction for twenty years, the house still retains its architectural oddities: Windows built into floors, stairways that lead directly into ceilings, and doors with nothing behind them. Cinematographer Ben Nott (“Predestination”) and production designer Matthew Putland (“Jungle”) beautifully capture the mystery of such a house, and much of the first act focuses on exploring such an entrancing location — as Marion shows Price to his room, her directives about how not to upset Aunt Sarah are quickly overshadowed by maids opening doors to dust woodwork in open hallway space and servants reaching through cabinets or full-on walking through them to prepare meals or redecorate rooms. There is the constant buzz of sawing wood and echoes of nails being hammered into place. At midnight each night, a bell tolls, adding to the tone of incessant disturbance, both for the living and the dead.

Winchester is an engaging Gothic haunted house story that effectively makes use of suspenseful build-up and payoffs . . . until suddenly, it doesn’t. The first three-quarters of the film draw you firmly into the mystery of Sarah Winchester and her staggering home, the stage is eloquently set to put this film alongside haunted house classics such as 1963’s “The Haunting” and 2001’s “The Others.” Unfortunately, the payoffs abruptly stop coming and the conclusion of the film falls into the category of been-there, seen-that. Mirren and Clarke perform well, but the characters and performances themselves aren’t standouts; the main character of Winchester is the house itself, and it isn’t sufficiently supported through the closing act of the film.

What could have been a fascinating and unnerving film about one of the most mysterious properties in America devolves into a run-of-the-mill story that further supports my assertions that you shouldn’t judge a horror movie by its ending. You’ll enjoy this one for most its running time, but it definitely won’t inspire any repeat viewings. 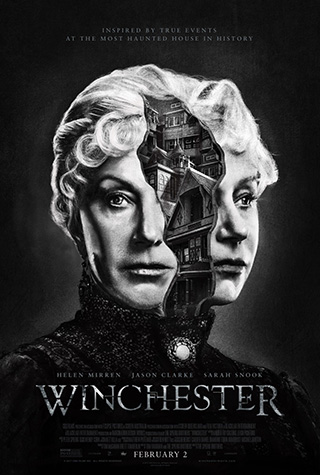