Whether or not space-time is an actual reality or simply an illusion, a convenient concept of the mind to get us through the day, is not relevant here. The Spierig Brothers (“Daybreakers”) mesmerizing film Predestination postulates that it is real, but that is only the starting point of a film that challenges us at every moment to make sense of a plot that becomes more and more complex as it unfolds. Based on Robert A. Heinlein’s 1958 story, “All You Zombies,” the film flashes backwards and forwards in time between 1945 to 1992, opening in 1970 as Temporal Agent (Ethan Hawke, “Maggie’s Plan”), attempting to defuse a bomb left by a serial killer known as the “fizzle” bomber, is badly burned and must undergo complete facial reconstruction.

The man, a time-traveling government agent who is dedicated to preventing crimes from happening before they occur, has repeatedly been unable to stop the bomber set to destroy a few blocks of New York City a few years later. The story then moves to where the now facially rebuilt agent is working as a bartender. When he serves a drink to an androgynous looking man, the strange customer bets that he can tell him the most bizarre story that he ever heard. It may not be the most bizarre story the “barkeep” ever heard, but it is definitely one of the strangest I have. The story teller, known only as “The Unmarried Mother,” a writer of true confessions articles, tells how he grew up as a female after having been dropped on the doorstep of an orphanage by an anonymous stranger.

From the beginning, the girl named Jane feels different. Physically strong and aggressive, she tries to become a member of Space Corps, a group catering to the pleasures of lonely astronauts run by the enigmatic Mr. Robertson (Noah Taylor, “Edge of Tomorrow”). A brief love affair and pregnancy with a man who suddenly deserts her puts an end to her dreams. After giving birth, she is told by her doctors that she has been born with both male and female internal organs and will have to live her life henceforth as a man. Changing her name to John, he/she is now offered the chance by the barkeep to go back in time and kill the man who ruined her life without facing any consequences.

Unlike many films of the genre, Predestination pauses long enough between plot twists to tell a very human story that is emotionally engaging. Most of the reason for this is the empathetic performance of Australian actress Sarah Snook (“Steve Jobs”) who has the sadness of ages written on her face. It would not do justice to the film to try and explain it (even assuming that I could) since half the fun of the experience is to figure it out, or, in any case, give it your best shot. Suffice it to say, if you are thinking about building a time machine and going back in time to correct some egregious mistake you made, the message of the film is that it might be better to leave well enough alone.

'Movie Review: Predestination (2014)' has no comments 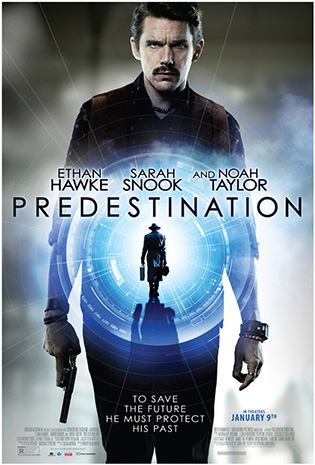