I already know I’m going to receive flack for this, so I’m just going to state it plainly: I have not read Alan Moore’s graphic novel “Batman: The Killing Joke.” I have also not seen any of Warner Bros. Pictures’ animated DC library, including any episodes of “Batman: The Animated Series.” I went into Batman: The Killing Joke completely blind. If you feel that information automatically invalidates my opinion, please stop reading this review . . . because it is not going to be completely positive.

Batman: The Killing Joke is two-thirds an adaptation and one-third original material, and it shows. With an elongated first act included to stretch the runtime to just over 70 minutes, there doesn’t feel like there’s enough content in the story to justify its feature length. While the majority of Moore’s story is preserved in the latter acts, the Batgirl-driven prologue that opens the film is easily the weakest element. Despite setting itself up as the story’s emotional foundation, it never manages to gel with the rest of the narrative thematically, and to me, that’s a huge problem. Although Batgirl (voiced by Tara Strong) is supposedly given more attention than in the novel, both she and her relationship with Batman feel very one-note and melodramatic. There is one scene in which it grows beyond an apprentice/mentor relationship, but it comes off as both jarring and forced, as it hardly ever factors into the events that proceed. Barely any of the set-up established in the first 20-30 minutes is ever paid off, including the introduction of a villain who only serves as background for Batgirl’s story and plays zero part in the remaining two acts.

That being said, the rest of the movie, while still a bit rough, is mildly better. Batman (voiced by Kevin Conroy, “Yoga Hosers”), fatigued by his endless and cyclical pursuit of The Joker (voiced by Mark Hamill, “Star Wars: The Force Awakens”), finds himself contemplating his entire relationship with his arch nemesis, and Conroy’s performance unsurprisingly adds a lot of depth to his character, despite sounding stone-cold on the surface. Hamill, as always, does an amazing job playing both The Joker and, through a series of flashbacks, an unnamed family man doomed to lose both his family and his mind. Barely any time is wasted with exposition — the writers clearly trust the audience to understand both Batman and his history with The Joker without having to go into too much detail. However, by the time we reach the movie’s end, it still feels unsatisfying. While I’m sure it reads better in the graphic novel, the minimal interaction between Batman and The Joker combined with the short runtime can’t properly evoke the sense of finality Batman keeps alluding to. Most of the pieces are there for a compelling confrontation, but the film could have utilized the first act to perfect Batman and Joker’s dynamic, instead of awkwardly shifting the focus to Batgirl.

Being unfamiliar with DC’s animated lineup, I was fairly disappointed with the animation. Occasionally, it does a great job of aping iconic visuals from the novel, but a lot of the character movement felt very jerky and stilted, as if there were just a couple frames missing from each walk cycle. Don’t get me wrong, it looks FAR from bad, but the lack of fluidity is especially apparent whenever CG animation is incorporated into the background.

Also, for those of you who are excited over this film’s R-rating, don’t be. While this definitely isn’t a movie for children, the graphic violence and sexual references are kept to a minimum. There’s some bad language, but it never goes beyond a PG-13 level (the Nolan movies had more profanity). This is probably the darkest tone I’ve ever seen in a Batman film, but compared to other R-rated movies, it still feels relatively safe.

While I have no doubt that this narrative is better told within the storytelling context of a graphic novel, Batman: The Killing Joke still left me cold. I didn’t feel like I watched any of these characters complete a journey, and in the end, the whole affair feels like two separate stories crammed together for the sake of time. The focus on Batgirl — while probably appreciated by some audiences — has little to do with anything, and although there’s stellar voice acting all-around, it still feels like an incomplete whole. If you’re a die-hard DC fan who must consume everything Batman, let’s be honest, I was never going to turn you away from this. If you’re not, you’re likely better off sticking with the graphic novel. 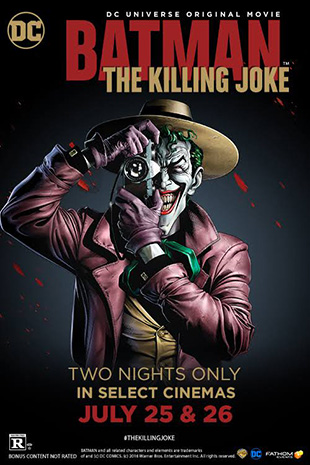