There’s a lot I wanted to like about Equity, a financial thriller featuring three central female characters, including a commanding lead performance from Anna Gunn (“Breaking Bad” TV series). It’s rare to see strong female characters in a Wall Street-set film, especially those as ambitious and calculating as the trio of leads here. And the film thankfully doesn’t attempt to coddle the audience through the more complicated financial minutiae of its plot, just moving along and letting the audience keep up. Director Meera Menon (“Farah Goes Bang”) is more interested in building suspense through the emotional entanglements and power dynamics of the film’s characters, only occasionally resorting to the overly-extreme angles, discordant musical cues, and distant, lurking camera clichés of the genre. The film also has a Fincher-esque muted color scheme of grey, cold interiors, contrasted with bright, cluttered exteriors that gives the Wall Street offices and upscale apartment locations an effectively joyless and distressing feel. Ultimately, however, the film is rather dull.

The script is a mish-mash of ideas and scenes that never really come together into a cohesive or compelling whole. When the story diverts attention away from Gunn’s character, especially, it loses momentum and focus. It doesn’t help that the supporting cast isn’t quite on the level of Gunn, but then the film wastes Gunn’s seething intensity by not giving her character much to do when she is on-screen. Gunn has a good, early, Gordon Gecko-like speech confessing her character’s love of money and criticizing society for making women feel ashamed for wanting power, but then we never actually see the character do anything powerful or particularly competently. She inexplicably compromises her ethics by sleeping with a transparently untrustworthy stockbroker (James Purefoy, “High-Rise”). She purportedly mismanaged an earlier IPO and proceeds to pretty much mismanage the IPO in the film’s plot. And she keeps her assistant (Sarah Megan Thomas, “Backwards”) by her side despite that character’s obvious duplicity. When that early speech is revisited by another character (Alysia Reiner, “That Awkward Moment”) during a job interview in the film’s last scene, it feels empty instead of empowering.

It’s a shame really, because the few scenes when the character and plot are fully realized are intriguing. Equity is at it’s best when it’s female characters are navigating within or raging against the male power structure and gender dynamics of the world of high finance. The best scene in the film involves Gunn’s character berating a male underling for giving her a cookie with only three chocolate chips while his cookie is oozing with chocolate chips. It’s a funny scene — really the only funny scene in the movie – and a welcome moment of focused rage as well as Wall Street excess and absurdity from the female lead that we should have had more of. Unfortunately, the mostly meaningless plot of IPOs, Chinese walls, and insider trading reduces most of the film’s running time to uninteresting, and often confusing, displays of jealousy and betrayal.

Meera Menon has a talent with actors and at building tension within scenes, and I’m interested in seeing what Menon could do with stronger material, but the director can’t overcome the script’s messy plotting. The film never comes together as anything more than a collection of scenes of varying interest and importance. Menon constructs a good globetrotting sequence of Gunn’s character meeting with investors before the IPO launch, but it doesn’t feel integral to the story. Neither do many of the scenes involving Cachet, the social network whose IPO Gunn’s character is managing, and it’s possibly, maybe compromised encryption code. As well, the thin mechanics of the plot’s mystery amount to a lot of close-ups of characters interacting with and reacting to screens, which leaves the action less than engaging. Despite some accomplished technical and stylistic aesthetics, the filmmakers aren’t able to sustain the emotional and thematic cohesion throughout the film that they’re able to realize in a few scattered scenes.

With a strong performance from Anna Gunn and a fresh and promising premise, Equity could have been much better than what it is. Unfortunately, it’s just not very good, and it’s certainly not the essential film about women on Wall Street that we need. 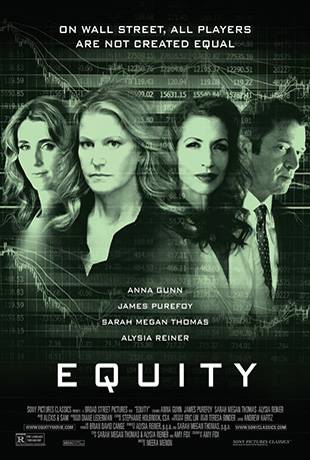