“Is an intelligent being likely to be much more than a large-scale manufacturer of misunderstanding?” — Philip Roth, The Counterlife

With Indignation, James Schamus makes his directorial debut from his own adaptation of Philip Roth’s 2008 book of the same name. Schamus is most well known as the screenwriting and producing partner of Ang Lee, collaborating with Lee on “The Ice Storm” (1997), “Crouching Tiger, Hidden Dragon” (2000), and “Brokeback Mountain” (2004), to name a few. Schamus also served as CEO of Focus Features, overseeing the productions of, among others, “Lost In Translation” (2001), “Eternal Sunshine of the Spotless Mind” (2004), and “Milk” (2008), and co-founded Good Machine production company in the early 1990s, which helped launch the careers of Todd Haynes, Ed Burns, and Todd Solondz, as well as Ang Lee. The pedigree is obvious — Schamus has written, produced, or distributed some of the most iconic and innovative cinematic works of the last 25 years. With Indignation, Schamus has proven he can also handle directing, especially in his work with actors. The movie is built around wonderful performances and Tracy Letts and Linda Emond in particular are captivating in supporting roles. The performances are what ultimately stand out in this carefully crafted, occasionally riveting, yet repetitive and staid film.

Indignation owes much to Ang Lee’s dramatic control and mastery of performance. Schamus’ directorial debut, however, feels much more like a Merchant Ivory Productions film, both rhythmically and thematically. The characters that James Ivory, Ruth Prawer Jhabvala and Ismail Merchant chronicle in their period dramas often tragically misunderstand their own emotional conflicts. Those characters are too wrapped up in period mores and strict class and gender roles to fully understand and embrace their inner lives. Unlike those films, the main character in Indignation, Marcus Messner (a tightly-wound performance by Logan Lerman, “Fury”) tragically misunderstands the emotional conflicts of everyone else. Marcus Messner is too wrapped up in himself and his deep-seated Jewish guilt to accept the emotional needs of others. He’s a sympathetic character, but not very likable. He’s also an anomaly, both intellectually and philosophically, at odds with both his 1950s Jewish community in Newark, New Jersey, and with the WASPy Ohio college he attends on scholarship, in part to flee from his increasingly unhinged and worrisome father but also to avoid the Korean War draft.

The Korean War looms over the film, most explicitly in the movie’s opening and closing war scenes (the least convincing aspect of the film, both aesthetically and dramatically). We first meet Messner at the funeral of one of his boyhood friends, killed in action in Korea, and he has to be forced into paying his respects to the deceased’s mother, and he then glibly dismisses his dead friend as an idiot for getting drafted in the first place. We then get a few of scenes of Messner with his parents, at home and at the family butcher shop, and he bristles underneath their fears and expectations. At college, he decides to bury himself in study and shun the people around him, including his outcast Jewish roommates and the Jewish fraternity that tries to recruit him (at the behest of the nephew of a friend of his father’s). He rejects the two communities that connect him to his Jewishness, because that’s the thing he most wants to disassociate himself from but the one thing that most stains him, especially within the oppressively conservative and Christian college he’s found himself in.

He’s finally stirred by Olivia Hutton (Sarah Gadon, “Dracula Untold”), the beautiful and emotionally volatile young woman who blows him on the first date. This event disrupts Messner’s carefully constructed moral universe and he becomes obsessed, driven by lust and guilt. This eventually leads to a moral and philosophical confrontation with the school’s dean (Letts, “Elvis & Nixon”), a beautifully constructed 12-minute dialogue scene that shows off Schamus’ skill as a director. There’s also a devastating scene between Messner and his mother (Emond, “Julie & Julia”) in which they strike a “deal” that has tragic consequences.

The film is filled with well-crafted, well-acted, beautifully shot scenes, that ultimately add up to the same thing, with little dramatic thrust. That dramatic repetitiveness makes the film feel long and sometimes shapeless. The cinematography is often strikingly beautiful, with deep orange and brown interiors, but also feels distant and cautious. There’s a dream sequence late in the film that reminded me of something out of a Luis Buñuel film, complete with surreal visuals and butchered meat, and it’s startling and alive in a way the film overall fails to achieve, outside of a few scenes. Indignation is an intelligent film that’s lovingly detailed and occasionally absorbing. The whole doesn’t quite work, but it’s worth seeing for its parts.

'Movie Review: Indignation (2016)' has no comments 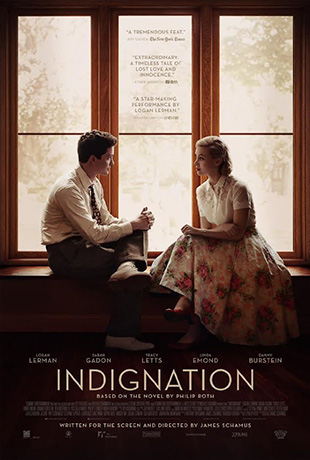