The story of Fury is harsh, straightforward, swift and breathtaking. And it is remarkable to bear witness to Don ‘Wardaddy’ Collier (Brad Pitt, “World War Z”) leading a Sherman tank crew through the German countryside toward Berlin in spring of 1945. The aesthetic qualities too are remarkably immersive — from the .50 caliber anti-tank fire screaming past Pitt’s head to the muted, muddied fields in which he stands. The ending is formulaic and right out of a Hollywood playbook, however, but in actuality it does not matter because this is a war film that connects to the audience on a visceral level that results in the best heart-pounding cinematic battle that’s hit theaters in years. And of course, Brad Pitt, although typecast, plays his best character role since before “Inglourious Basterds.”

It relays the tale of Wardaddy and his seasoned crew towards the end of World War II in the European theater. The brazen sergeant has just lost his assistant driver, and the new replacement, a young, untested and innocent typist, Private Norman Ellison (Logan Lerman, “Noah”), is tasked with cleaning half of his predecessor’s face off of the tank’s interior. Needless to say, it’s a rough welcoming to warfare for Norman (war name: ‘Machine’). The crew is rounded out with: Boyd ‘Bible’ Swan (Shia LaBeouf, “Nymphomaniac”), Trini ‘Gordo’ Garcia (Michael Peña, “Gangster Squad”) and Grady ‘Coon-Ass’ Travis (Jon Bernthal, “Rampart”). On orders from Captain Waggoner (Jason Isaacs, “Harry Potter and the Deathly Hallows: Part 2”), the crew needs to protect a crossroads from approaching German troops. Wardaddy does not shy from an order (even if it amounts to what could be construed as a death sentence), and the crew is faithful to the cause even after the remaining tank-convoy is decimated leading to a heroic stand in which their lives are all but guaranteed to be lost.

They won’t go down easy, though. They’ll viciously stab, shoot, pummel, explode and drive their tracked war-machines over the enemy with a steely commitment only found in men bounded by blood to their brothers-in-arms. And we’re a party to it. Every shot, every gouge, every limb-tearing explosion, every cry is emblazoned on screen as if we are a member of the unit. It’s so ingrained that even if they’re self-proclaimed buffs in eleventh grade world history, this unrelenting violence could prove too extreme for the younger crowd.

Fury is far more than just bloodied battle sequences — viewers get to visualize not only the fiercely unpredictable tribulations of war, but also the natural apprehension that comes along with entering a global conflict of this scale. These men — coined “America’s Greatest Generation” — were human after all. There was, as we come to know, more fear circulating through these tanks than valor. We see it in Norman’s sheltered eyes, in his posture and in his discourse. We see it in a calcified Wardaddy who must separate the cruelties of war from immorality. We see it in the carefully crafted mise-en-scène by writer/director David Ayer and cinematographer Roman Vasyanov (both incidentally worked together on the engrossing cop drama, “End of Watch”). We hear it from Steven Price’s musical accompaniment. Each of these variables display a depth and precision in production that practically ensures the film will be recognized come awards time in one way or another.

Even if on the oft chance it comes home empty-handed — the American flag-waving may be too much for some and the standard Hollywood formula application too banal for others — it’s definitely too poignant to ignore. Award or not, Fury is a fine companion to films like “Enemy at the Gates,” “The Pianist,” “Saving Private Ryan” and “The Thin Red Line” on the top shelf of powerfully effective WWII movies. 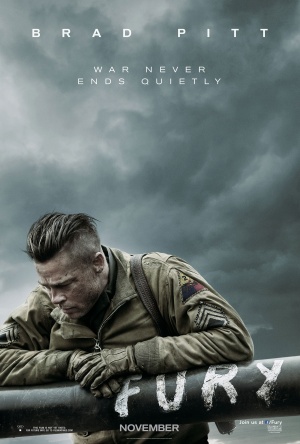