Last summer, director James Wan gave us a terrifying dramatization of a true haunting in Burrillville, Rhode Island in “The Conjuring” and scared the pants off summer moviegoers. Yet again, his quality horror moviemaking transformed into huge box office payouts and introduced the world at-large to paranormal investigators Ed and Lorraine Warren. Renowned in the ghost-hunting community, the Warrens’ most famous cases include the possession of a young boy (the basis for the novel and film “The Exorcist”), the investigation of the house from “The Amityville Horror,” and a Raggedy Ann doll acting as a conduit for a demon that terrorized two nursing students in their shared home. After weeks of unsettling experiences in which the doll appeared to be moving from room to room, the nurses consulted a medium who informed them that the spirit of a little girl named Annabelle had taken a liking to them and wanted to live in the doll. Annabelle was given permission to stay, and the nurses were subjected to increased attacks and terror, finally culminating in a vicious attack on a friend. Ultimately, the Warrens were contacted, and after their investigation, Ed and Lorraine concluded that they should take possession of the dangerous demon-infested doll.

Understanding the horrifying implications of possessed household objects and the underlying creepiness of many dolls in general, Wan used this incident as a prologue to the story in “The Conjuring” and the spin-off Annabelle was born. To be clear, the story of Annabelle has no relation to the haunting portrayed in “The Conjuring,” and the Warrens are the only connection between the two.

In Annabelle, the doll in question is a rare collectible with braided pigtails, red painted lips, and bulging blue eyes (the Raggedy Ann doll had to be altered as, to no surprise, the manufacturer didn’t want their product represented in such a way), but any similarity to the original haunting ends with the title. In fact, this doll isn’t owned by nursing students; she is given as a gift to a pregnant Mia (Annabelle Wallis, “The Brothers Grimsby”) by her husband, John (Ward Horton, “The Wolf of Wall Street”), and added to an extensive collection of porcelain dolls that decorate the nursery. As if the arrival of their first child wasn’t nerve-wracking enough, Mia and John see on the news that the Manson family trials have begun, setting our story in the early ‘70s. And as bad luck would have it, a cult crosses their path too. Trying to prove their loyalty, the neighbors’ daughter Annabelle Higgins (Keira Daniels) and her boyfriend attack Mia, but are killed by police before they can complete the sacrifice. Annabelle dies cradling Mia’s creepy pig-tailed doll as a drop of her blood lands on its face, showing us how the evil transfers to the doll.

In the subsequent days, Mia is placed on bed rest to ensure her and her baby’s safety, and strange things begin — quite predictably and uninventively — to happen in her home. Her sewing machine runs by itself in the middle of the night. The rocking chair in the nursery creaks ominously back and forth by itself. An untouched door closes. The last straw comes when an unseen force drags Mia towards a fire that has engulfed the kitchen in flames.

The family moves to Pasadena so John can finish his residency at a top hospital (escaping the evil surrounding this wife and baby is an added bonus). The presence follows (of course) but a new character named Evelyn (Alfre Woodard, “12 Years a Slave”) is introduced. She has a convoluted story herself, seems to understand what is going on and shows up unannounced an awful lot — clearly novice horror scribe Gary Dauberman is clumsily positioning her for something pivotal.

While the premise and source material are certainly unnerving enough to provide a great story, the execution of Annabelle is fraught with clichés and obvious turns in plotline. Director John Leonetti gives us a creature that is reminiscent of producer James Wan’s red-faced demon from “Insidious,” and there are a few nods towards Roman Polanski through the alignment of Mia’s attack with the Manson Family’s murder of Sharon Tate and the appearance of a creepy baby carriage in the basement. The best sources of tension in the film come from an early sequence in which Leonetti masterfully presents the neighbors’ murder with a voyeur’s view of the grisly scene through Mia’s and John’s bedroom window and later when Mia rushes for safety up a stairway. Aside from that, however, there’s little to set this film apart from the other kinda-sorta creepy stories that have come before it; there’s nothing here we haven’t seen before, and in better films. Even the wonderful Alfre Woodard, playing a bookstore owner and neighbor to the Gordons, can’t save the cheesy integration of research from occult books and a resolution that seems like a halfhearted homage to Father Karras’ sacrifice in “The Exorcist.”

Perhaps some casual horror moviegoers might appreciate the few-and-far-between moments of suspense, but Annabelle is an opportunity missed for the die-hards who will see it as just another ghost story stretched too thinly for a movie that feels longer than its 99-minute runtime. One is better off reading the stories of the true hauntings, and for those who are familiar the truth, there is a nice little Easter egg in the final scene that brings the movie back to the origin story (keep a close watch on the top left corner of the screen for a shelf behind the mother in the shop). 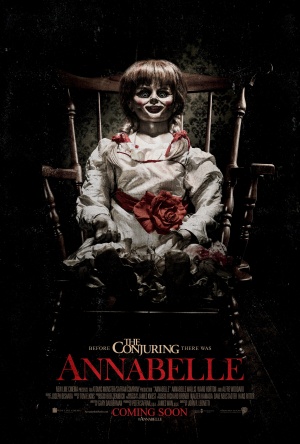