From Joe Lynch, director of “Everly,” comes Mayhem, an ugly mishmash of the zombie apocalypse and tower assault subgenres.

Unwisely referencing “A Clockwork Orange” in the opening, with Rossini’s “The Thieving Magpie” overlaid on some stylized ultra-violence, Derek (Steven Yeun, “Okja”) explains the “IV7” virus via narration. It’s a condition which purportedly causes the sufferer to operate entirely on the id, which naturally turns the sufferer into a homicidal maniac.

One such sufferer, who went on a murderous rampage, was defended by Towers & Smyth Consulting. The contention that the murderer wasn’t guilty because he was under the influence of IV7 was successful. Giant litigation firms are immoral, you see — and in case you weren’t clear on that, Derek refers to the employer for whom he desperately covets a promotion as “corporate scumbags.”

Now, in a twist of irony, IV7 has arrived at Towers & Smyth. Everyone is infected. The building is quarantined and goes into lockdown. Derek has eight hours to ascend to the top of the tower and get his revenge on the boss for making him the fall guy on an unwinnable case. Derek is joined by Melanie (Samara Weaving, “Monster Trucks”), a woman who approached the company in order to prevent foreclosure on her home.

It’s “Dredd” meets “High-Rise” as the pair must fight their way to the top of the hierarchy. Like a tiresome video game, Derek and Melanie must overcome mid-bosses along the way: The Human Resources Nazi (Dallas Roberts, “Dallas Buyers Club”); career bitch Cara (Caroline Chikezie, “The Sweeney”); The Bull (André Eriksen, “Pioneer”); and finally the big Bowser himself, John Towers (Steven Brand, “Teen Wolf” TV series).

The problems with Mayhem are many, beginning at the source of the infection: The id-enabling virus itself. The filmmakers entirely misunderstand and misappropriate Freudian theory, of course, meaning that it’s never clear what the virus actually does. That anyone infected can act with legal impunity is an idea with legs — but those legs are crippled limbs, utterly drained of any potential satire.

If everyone is operating purely from base urges, why are certain employees acting rationally and thoughtfully? Why are Derek and Melanie one minute relishing their murder spree, and then stopping for a heart-to-heart the next? And if all those ultra-competitive board members are infected, why are they functioning just as they did before? One might venture that the virus is simply an excuse for stylized, guilt-free gore in lieu of smart dialogue or subtext.

It would be okay if the violence itself were fun. Or imaginative. Or varied. But in the end, there’s more macho posturing — delivered via videophone, mostly — than enjoyable fight scenes. A big scrap between Cara and Derek is built up like the church battle of “Kingsman: The Secret Service,” complete with an ironic jaunty rock tune. But the resulting showdown, while visceral, is long-winded, poorly edited and derivative.

Indeed, Lynch’s entire approach is derivative. Desperately drawing attention to itself, nary a panning shot goes by without a swooping sound as some object passes in the foreground. It makes one realize how smart Edgar Wright must be to make his frames dance with the energy they do. Lynch’s visual style is driven by an incongruous electro-synth score by Steve Moore, which sounds like a tepid marriage of John Carpenter and Cliff Martinez.

Inevitably, all of this is window dressing for the biggest cliché of all, burning like trash at the film’s heart: Namely, that office workers are merely sheep to the evil corporate shepherd. At one point, Derek even says, “I’m just a slave to the grind.” My eye-roll completed its journey, which had begun during the shot of a bloodied Derek standing in an elevator while cheesy muzak played.

All someone else’s style without substance, and with dialogue which sounds like a Reddit argument read aloud, Mayhem might appeal if you are fourteen and male. But it makes no sense in terms of concept, plotting or basic editing. It’s an ugly movie of ugly ideas, owing its existence to a host of better films, without ever justifying its own. 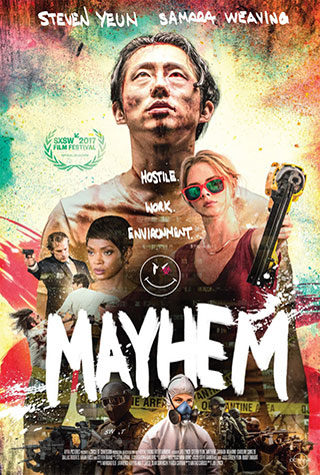