One of the important messages of Thank You for Your Service, first-time director Jason Hall’s perceptive drama about the physical and psychological effects of war, is that returning veterans need to be able to talk about what happened in combat and how they have been personally affected by it. Too often, however, friends or loved ones do not know how to talk to them about their experience or encourage them to talk themselves. The vets must also deal with a culture of toxic masculinity that tells them that any outward expression of emotion is a sign of weakness, forcing them to turn inward, often to irreversible consequences. Based on the book by David Finkel, a writer who was with the men in Iraq during the time they were deployed, the film stars Miles Teller (“Bleed for This”) as Adam Schumann, a returning soldier who longs for the normalcy of family life.

Also returning with him are Samoan-born Tausolo “Solo” Aeiti (Beulah Koale, “Hawaii Five-0” TV series), and Will Waller (Joe Cole, “Secret in Their Eyes”). They receive a welcome home as they step off the plane and hand their weapons to a soldier checking them in. Though the three men may be unaware at this time, some will experience Post Traumatic Stress Disorder (PTSD) a condition that may include insomnia, nightmares, or thoughts of violence or suicide. It is an illness, as reported by a 2014 study by the Rand Corporation, in which nine percent of vets suffer from shortly after returning from deployment and by thirty one percent a year after. The study also shows that as many as fifty percent of those with PTSD do not seek treatment.

Some are luckier than others, however. Adam has the benefit of an understanding wife Saskia (Haley Bennett, “The Girl on the Train”) and two small children including an infant son to go home to. Solo is married to Alea (Keisha Castle-Hughes, “Game of Thrones” TV series) who is expecting their first child and hopes to re-enlist, saying that the Army saved his life. Will, however, who received multiple injuries at the front, is not as fortunate. He is engaged to be married but returns home to an empty and deserted house with his fiancée refusing to answer his phone calls. Although Solo explodes at home on one occasion and becomes involved with drug dealers, plot contrivances are kept to a minimum. The real story goes on in the minds of the soldiers — how they feel about the trauma they are continually reliving, and how they are coping with pressure to feel and act as if nothing has happened.

Adam outwardly appears to be the strongest and most stable of the three men, though he keeps his anxiety well hidden. On several occasions, he looks out for Solo’s well being ahead of his, especially when he gives Solo his place in line at the VA, and when he advises Solo to “let it go,” after his buddy tells him about a soldier that he forgot in the jeep as a result of the memory loss he suffered after an IED attack. Schumann also helps Amanda (Amy Schumer, “Snatched”), the wife of deceased soldier James Doster (Brad Beyer, “42”) to learn exactly how her husband died. Adam, however, has his own demons.

He must confront his responsibility for Doster’s death and for an incident in which he carried a wounded soldier from a rooftop down three flights of stairs with his blood flowing into Adam’s mouth, only to drop him half way down causing serious injury. Fortunately, it soon becomes apparent to both men that they need treatment. Though they turn to the Department of Veterans Affairs for help, the results are not fruitful. After waiting for hours to be seen, they are sent upstairs to get an ID card but when they finally find someone to talk to, they are told that it may be six to nine months before they can see a psychiatrist or even a medical doctor. To add to the distress, Adam’s commanding officer tells him that seeking help is bad for the Army’s morale.

While Thank You for Your Service does not always have the huge emotional impact it should, it helps us to at least partially understand the trauma that many of those who have survived the war have to face. Hall resists the temptation to score political points and offers no direct criticism of the military or the War in Iraq, though the point of the film is not obscure. British poet Wilfred Owen expressed it best in his poem “Dulce et Decorum est,” written to a friend, “If you could hear, at every jolt, the blood come gargling from the froth-corrupted lungs . . . my friend, you would not tell with such high zest to children ardent for some desperate glory, the old lie; Dulce et Decorum est Pro patria mori.” (It is sweet and right to die for your country). As demonstrated in the ironically titled Thank You for Your Service, it is a lie that can turn to heartbreak, then anger, and often tragedy.

'Movie Review: Thank You for Your Service (2017)' has no comments 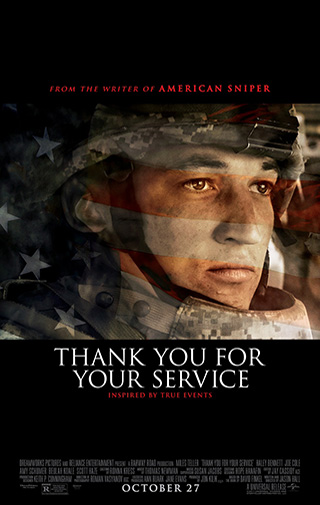