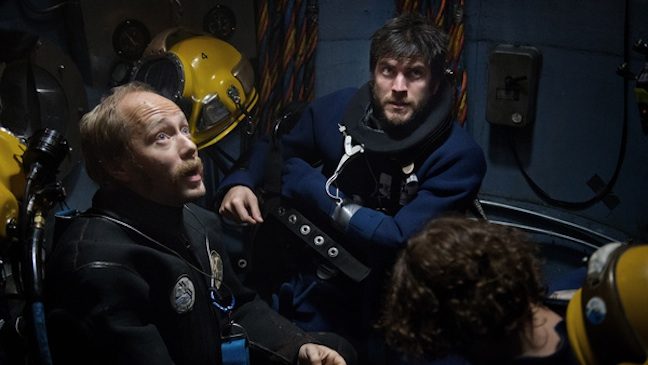 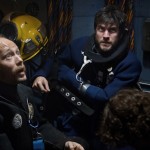 In the early 1980s, an oil reserve was discovered in the North Sea, off the coast of Norway. The problem revolved around this reserve being located over 500 meters below sea level — a depth at which it is incredibly dangerous for divers to build pipelines. The US had the scientific technology and knowledge to produce a gas that would help divers breathe under such pressure, but naturally, would only provide Norway with this gas if they were also given access to the reserve. So began a political, scientific and — at times — literal tug of war between the two nations. Erik Skjoldbjærg embellishes these true events to quite an extent in his latest film, Pioneer, but maintains a realistic affectation nonetheless, largely achieved through his quasi-documentary style.

Petter (played by Norway’s biggest star, Aksel Hennie) is one of the Norwegian divers trained for the task of laying the necessary pipes, along with his brother Knut (André Eriksen) and a few Americans, including the particularly antagonistic Mike (Wes Bentley). In the aftermath of a preliminary dive gone wrong, it is up to Petter to determine the cause in order to clear his own name, but this soon leads him into a world of political corruption and greedy industrial businessmen that seemingly will stop at nothing to make money. The cast is generally fantastic, with Hennie standing out in his ability to command our attention with his on-screen presence, and Stephen Lang (“Avatar“) as Ferris, a powerful individual that only becomes more threatening with time.

Having co-written the screenplay with four other writers, it seems as though Skjoldbjærg’s biggest mistake is not having enough faith in this style for this story. The beginning of the film is undoubtedly strong, capturing our interest almost immediately with a combination of tight, intense shots, archive footage and extraordinary underwater images. Pioneer generally maintains this style throughout the first half, creating tension and suspense without seeming melodramatic, but soon starts to degenerate into a collection of rushed scenes that attempt to convey the unease of conspiracy but merely seem improbable and contrived. A tragic accident that originally shakes us quickly becomes the source of a half-hearted political message and a somewhat careless attempt at a thrilling plot. Again, a lack of faith and investment into one of these avenues is the cause of the film’s failures; either a more thorough examination of political corruption and its ramifications, or a deeper exploration of the psychological battles at play, would greatly benefit the film in terms of engaging the audience. 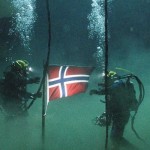 The visual atmosphere of the film is stunning, however, with its period setting allowing for a beautifully gritty filter of blues and greys laid over dark scenery. This aids Skjoldbjærg in creating a sense of distortion and displacement in order to simulate the effects of the gas on Petter — these shots become almost hallucinatory at times, emphasized further by occasional handheld camera work. The cinematography of Jallo Faber (who also worked on “Tinker Tailor Soldier Spy“) is certainly to be commended, and is made all the more effective by the film’s seamless cuts and transitions. The sound design, on the other hand, is severely lacking in quality by virtue of being overtly present in quantity. With a soundtrack by the band Air, the film seems to rely too heavily on creating emotions through the sensational music, which more often than not simply comes across as overpowering. There were more than a few instances in which I found myself distracted by the music to the point at which it began to detract from my involvement in the film itself.

There’s something intriguing about a story presented from an unreliable perspective, and Skjoldbjærg not only understands what this is, but pinpoints and enhances it to maximum effect in Pioneer. His characters work fantastically together, offsetting their qualities to emphasize each of their flaws in the most honest way possible. With a plot that is weakened by its search for quick thrills, however, the film seems to last too long with not much to say about the incredibly interesting dynamics it touches upon. As an addition to the selection of Norwegian films penetrating Hollywood, Pioneer is by no means a weak link, but neither does it reach the potential suggested by its premise. 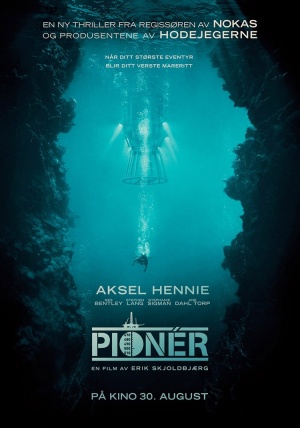