In a scene near the end of Downhill, a scowly, bald-headed ruffian mutters, “What a waste” just before blowing someone’s head off. The statement could also serve as an unfortunate slogan for the movie itself: An interesting premise and a gorgeous setting undermined by spotty writing and hysterical overacting. It’s almost bad enough to someday aspire to be featured on an episode of “Mystery Science Theater 3000.”

After his best friend dies, a professional off-road biking star named Joe (Bryce Draper, “Muck”) reluctantly and with some prodding by his girlfriend Stephanie (Natalie Burn, “The Expendables 3”) heads to Chile to participate in a biking event run by his old friend Pablo (Ariel Levy, “The Green Inferno”) and his partner, Mags (Ignacia Allamand, “Knock Knock”). Joe’s still getting over his pal’s demise and hasn’t done any competitive biking since the accident. (Note: the sport is essentially BMX, but the term itself is never used in the film.) He agrees to make an appearance at Pablo’s event and race, lending his name to what’s become a burgeoning activity in South America.

The trip to Chile isn’t a pleasant one for Stephanie and Joe; their bikes are misrouted as if they were common luggage, and the journey is long and arduous. Ominously, there’s an incident at a small, backwater store in which an inappropriately dressed Stephanie is harassed by some local punks. One of the punks is bald and scowly. We may encounter him later, if previous movies like “Wolf Creek” are any indication.

But finally they do make it to Pablo’s and Mags’ house. After the duo get settled, Pablo announces there will be a huge shindig that evening. The party is uninteresting except for two reasons. For one, we meet the rich benefactor who is sponsoring Pablo’s event, and for another we discover that there’s some history between two of our main characters. But not to worry, as neither plot thread is touched on for the remainder of the film.

The next day, Stephanie and Joe decide to take the race route — through mountainous, isolated terrain — for a test run. It’s not an easy run (it’s mountainous, after all), but it takes a dramatically tragic turn when our heroes encounter a badly injured man in a recently crashed car. They frantically call for help from Pablo, who brings a doctor, but just as the group is getting the poor wretch out of the car, shots are fired. The doctor is down and out, and our fearsome foursome is stuck with a hurt guy who also appears to have one heck of a bad case of eczema. Or something.

It’s right around this time that Downhill goes off the bike path. I’ve seen lost-in-the-woods movies before. I’ve seen movies in which the protagonists are being shot at. People panic in these movies. And they panic here as well, but coupled with mood swings that aren’t just out of character but laughably incoherent.

You could make an interesting movie based just on what I’ve mentioned here: Mysterious bad guys with big guns chasing bike enthusiasts through the remote Chilean woods. Who are they? And what’s with the guy with the bad skin? And although those questions are (mostly) answered, the route that the film takes to get there is circuitous and sometimes baffling. Rather than delving into an intriguing mystery, the movie just keeps throwing oddity after oddity at the proverbial fan to see if anything sticks. Nothing does; plotlines evaporate, and there’s little meaning to be found behind all of the goings-on.

There were times when a character would mouth the most preposterous lines — or, perhaps worse, overact the scene. Imagine handing something as innocuous as a salt shaker to a friend. The friend, taking the shaker, puts hand to forehead and scream, “Oh, no! A salt shaker! Why? Why?” The reactions in this movie are at times so over the top that one wonders if the characters are seeing the same things that we, the viewers, are seeing.

And in the end, there’s just a sense of futility, of time wasted. You could have been washing dishes, maybe growing a mold sample, maybe regrouting the bathtub. There’s no sense of completion, but there’s also no sense that you’ve missed anything, either. Downhill is not an exceptionally bad movie, thanks to its setting and premise, but it fails miserably to make much of either. 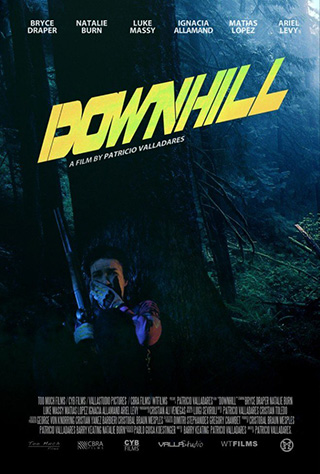