First of all, despite the title, The Birth of a Nation, this film is in no way connected to the 1915 silent classic directed by D. W. Griffith. Secondly, I was led to the “Confessions Of Nat Turner” (the real jailhouse interviews in 1831, not the 1967 William Styron novel) from an article in “The People’s Almanac” while in high school. There was a simple reason for this: While other guys were dating and enjoying their prep experiences, I was a dork who ended up reading things about the history of the slave rebellions — including uprisings like the 1739 Stono Rebellion, which was the largest slave revolt ever staged in the 13 colonies, and The Amistad Slave Rebellion in 1839, in which a group of Africans, en route to America from Cuba, seized the Spanish ship “Amistad” (which, by the way, was also made into a film by Steven Spielberg in 1999).

In this current movie about what became known as the Southampton Insurrection, Turner (Nate Parker, “Non-Stop,” who also directs) impressed family and friends with an unusual sense of purpose, even as a child. Seeing this, his owner, Benjamin Turner (Danny Vinson, “The Longest Ride”), hopes to use this persuasive power to control other slaves.

Instead, driven by prophetic visions (including a solar eclipse) and several horrid scenes showing whites as deplorable and unredeemable, and joined by a host of followers on Aug. 22, 1831, Turner, now called “The Prophet” by other servants, the armed slaves and some free blacks set off to slaughter the white neighbors who had enslaved them.

In the early hours of that morning, they bludgeoned Turner’s master and his master’s wife and children with axes. By the end of the next day, the rebels had attacked about 15 homes and killed between 55 and 60 whites as they moved toward the religiously named county seat of Jerusalem, Virginia. Among these victims were many children. Turner was quoted as saying they were killed because “nits become lice.”

Other slaves who had planned to join the rebellion turned against it once the white militia began to attack Turner’s men, undoubtedly concluding that he was bound to fail. Most of the rebels were captured quickly, but Turner eluded authorities for more than a month (despite the movie showing him sacrificing himself for his followers). A special Virginia court tried him on Nov. 5 and sentenced him to hang six days later (of his fellow rebels, 21 went to the gallows, and another 16 were sold away from the region). A barbaric scene followed his death. Enraged whites took his body, skinned it and distributed parts as souvenirs. His head was removed and for a time sat in the biology department of Wooster College in Ohio. In fact, according to some sources, it is likely that pieces of his body — including his skull and a purse made from his skin — have been preserved and are hidden in storage somewhere.

Today, for obvious reasons, Turner remains a legendary figure, remembered for the bloody path he forged in his personal war against slavery, and for the grisly and garish way he was treated in death. That’s the way Parker also wants him to be seen, as well.

Still, in his confessions, Turner said: “. . . neither age nor sex was to be spared, (which was invariably adhered to.) . . . The murder of this [the Turner] family, five in number, was the work of a moment, not one of them awoke; there was a little infant sleeping in a cradle, that was forgotten, until we had left the house and gone some distance, when Henry and Will [two of his most devout and violent followers] returned and killed it.” In fact, despite his leadership, Turner let others do the dirty work and he admitted to taking just one life, that of a fleeing young girl (beating her to death with a fence post).

He also writes: “I took my station in the rear, and as it ’twas my object to carry terror and devastation wherever we went, I placed fifteen or twenty of the best armed and most to be relied on, in front, who generally approached the houses as fast as their horses could run; this was for two purposes, to prevent their escape and strike terror to the inhabitants — on this account I never got to the houses. I sometimes got in sight in time to see the work of death completed, viewed the mangled bodies as they lay, in silent satisfaction, and immediately started in quest of other victims . . .”

None of this reality is reflected in The Birth of a Nation, which is mostly a celebration of the rebellion as a matter of black pride (which is certainly a modern issue which transports itself to the early 19th century, a sin many current Hollywood products commit). Parker directs himself to an almost saintly, even Christ-like, character, broad-brushing the majority of whites as inhuman animals that deserved whatever happened to them (except the murder of babies, which really took place).

Of course, no current release will show young children and infants being slaughtered and the theft and looting of property from the murder victims, so what remains is a rather antiseptic version of one of the most violent episodes in the antebellum South (and a real wake up call to be sure). What we do see, though, is plenty of evil white crime (including two rapes and other ghastly scenes that were most likely inspired by Parker’s own feelings and are not necessarily bolstered by the facts. It makes one wonder if Louis Farrakhan shared scriptwriting duties here.

That being written, however, no one, especially this author, is going to defend the evil institution of slavery, but as a professional film critic, I am bound to report that The Birth of a Nation, as a true story, is just impossible to tell forthrightly in today’s politically-correct atmosphere (which condemns any criticism of minorities, no matter what the true circumstances might be) and I certainly understand the concept of dramatic license.

That does not mean this is a satisfying cinematic experience by any means. However, enough critics and viewers will have no idea what the event was really all about and will most likely see this as simply a justifiable strike against slavery, which, even with this rebellion, still did not end until the conclusion of the Civil War, more than 30 years later.

To it’s end, adequate acting support is given by Armie Hammer (“The Lone Ranger”), Penelope Ann Miller (“The Artist”), Jackie Earle Haley (“London Has Fallen”) and Aja Naomi King (“How to Get Away with Murder” TV series), among others, but clearly the main performance in The Birth of a Nation is by Parker, good, bad or otherwise. Period detail is fine, but the obvious slant and historical revision is too disturbing to fully recommend this motion picture. 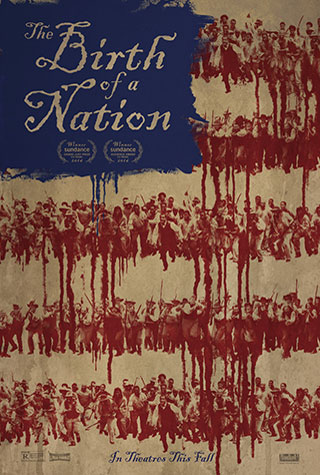