Upon the release of “The Human Centipede (First Sequence),” many were rightfully disgusted and offended. Despite feeling very amateurish in its filmmaking, it garnered legs by playing on its audience’s morbid curiosity, and it often did so through mere suggestion rather than explicitly showing you horrifying things. However, once the the film’s popularity was at its peak, director Tom Six managed to raise enough of a budget to craft a sequel: “The Human Centipede 2 (Full Sequence).” It was nowhere near as suggestive, instead opting to show you every gruesome aspect of its subject matter in nauseating detail.

Unsurprisingly, this is when most people tapped out of the franchise, but the film was still successful enough to warrant a second sequel . . . at least according to Tom Six.

Enter The Human Centipede 3 (Final Sequence), a cinematic experience so excruciating, it makes being waterboarded look like a vacation in Fiji. Having already cranked the horror to 11 in his first sequel, Six chose to cap his horror trilogy off with a movie he thinks is a comedy. The thing Six doesn’t seem to understand is that comedies, by definition, are supposed to amuse their audience. There is NOTHING amusing here, not even perversely. From the first frame to the last, this movie assaults you with its ugliness, and unlike its predecessors, it never takes time to relent. Granted, we’ve already come to expect this kind of repulsiveness from Six, but the contents of this “comedy” involve frequently casual racial epithets, multiple scenes of mutilation (including a graphic castration sequence), and sexual abuse from the opening scene on. Hilarious, right?

Granted, this is a more plot — and character — oriented endeavor than the first two films, but it’s a wasted effort on all accounts. The overall tone of the film is thrown all over the place thanks to the re-casting Dieter Laser (“I Am the Other Woman”), the star of the first film, as the lead. Laser plays Bill Boss, a ridiculously offensive prison warden trying to keep his ridiculously offensive prison in check. He overacts with what appears to be be decided intention, but while it served as comical tonal juxtaposition in the first flick, any entertainment value here gets camouflaged by the film’s aggressively convoluted mishmash of over-the-top deviancy and misguided attempts at levity. At his side is the pathetically nebbish Dwight, played by Laurence R. Harvey (“ABCs of Death 2”), another returning cast member from the franchise. He gives a dramatically different performance than earlier and is easily the best actor in the movie, but he’s completely underutilized thanks to the domineering fixation on Laser’s character. And then there’s ex-pornstar Bree Olson, playing a character who has a name you won’t remember, as she’s referred to several different monikers throughout the film, such as “tits,” “bitch,” “office slut,” and more. Aside from Tom Six’s sister making a brief cameo, she is the only female in the entire movie, yet her character’s sole purpose is to be on the receiving end of Boss’s various forms of abuse. (Reminder: This is a “comedy”).

It’s hard to say who this movie is for. It clearly isn’t made for the fans, as the titular centipede isn’t the primary focus of the movie. In fact, there really isn’t any focus at all. Every grotesque sequence of this movie feels cluttered and shoehorned in to one-up the last, but it never feels like a one-up. It’s 100 minutes of uninterrupted hostility, but it’s only a matter of minutes before it becomes fatiguing. While the first two movies relegated the most disgusting aspects strictly to visuals, this movie’s entire script is littered with shock value. But “shock” is only shocking when there’s a line to cross, but Six begins this movie way past that line and just keeps moving forward, sterilizing the potential for the extreme reactions he so clearly desires.

I live-tweeted my reactions to this movie a few months back, and at one point I referred to Tom Six as a “weasel.” Shortly thereafter, the director retweeted my comment and briefly changed his profile picture to that of an actual weasel, laughing while he did it. I think that reaction paints an accurate picture of what this movie is. The Human Centipede 3 (Final Sequence) is not a movie made for you: The audience. It’s Six’s complete, sick vision, and he didn’t make it for anybody but himself. It serves only to amuse his own warped ego, and it’s obvious he’s proud of his work. From both a position of satirical or morbid curiosity, there is nothing to appreciate here. It runs the gamut of taboos, offending every possible demographic as often as possible. It’s an abrasion to both genre filmmaking and all five of your senses. You’re better off ignoring it completely lest we get a fourth addition to this hopefully dead franchise. 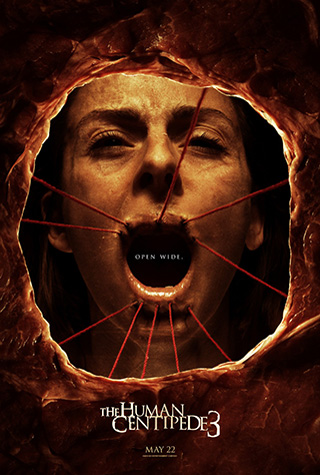