ClownTown is definitely not a movie for all you coulrophobics out there. It is, after all, a movie about killer clowns, and they’re not even from outer space this time. There’s no humor to be found here either, because they’re, well, killer clowns. It’s intended to be a scary, scary film, and it largely succeeds.

To begin with, there’s a prologue. A young babysitter reads her two charges a story and puts them to bed. Later, after changing her bra (no, I don’t know why, either), she hears a noise. Upstairs, she notices that the boy is missing from his bed. And, a short time later, she’s deader than the movie career of [insert name of some random TV star here]. This is not a spoiler.

Fifteen years later, a quartet of seemingly unrelated young folks are crossing the hinterlands of Ohio in a Hummer, on their way to a concert. Suddenly, Jill’s (Katie Keene, “Healing the Stupid”) phone can’t get a signal! Imagine that! They pull over in some Podunk town and head to the diner to get directions, because none of them thought to use Mapquest or even write things down. Then there’s the requisite creepy interaction with the locals, and soon our fun gang is back on the trail. Only, whoops! Jill’s left her phone behind, a fact they don’t realize until they’re like, way too far away to go back and get it without being late for the concert. So they get the great idea of calling the phone, hoping some nice person picked it up, and a voice tells them to meet him at the next town and he’ll return the phone. So they do, and that’s when the festivities begin.

Jill, her boyfriend Mike (Andrew Staton, “Dark Things” TV series) their friend Brad (Brian Nagel, “Coast Mafia”), and his girlfriend Sarah (Lauren Compton, “Attack of the Killer Donuts”) find themselves in an isolated, pretty-much-empty burg inundated with guys with skills in makeup application. And wielding deadly objects, too, like a crowbar or a machete. They’re clowns, but not nice clowns. The great news is that they don’t talk, although they do hiss and snarl a lot. And, I have to tell you, seeing devilish, sinister clowns acting all loony and whatnot kind of put me at a disadvantage. Gone were the cuddly clowns like Clarabelle and Bozo, and in their place for the rest of infinity were even more horrifying versions of Pennywise from “It.” Or The Joker from “Suicide Squad,” for that matter. These are not nice clowns. I guess that’s the real takeaway here.

Now, before too long, the gang runs into the expected jaded old coot (Greg Violand, “Carol”) who explains the backstory of the humble hamlet of ClownTown. It’s marginally interesting, in that it keeps the story a-moving, but I wouldn’t expect much detail. There really isn’t much time to delve into the backstory, frankly, what with the evil clowns constantly on everyone’s case. It’s their town, and that’s no laughing matter.

The clowns are great, particularly their leader, the one who makes with all the hissing sounds. The good guys, not so much. Part of the problem is that the non-clowns have to actually spout dialog; their acting method is physical by nature. Those actors not clad in makeup (well, in abundance, anyway), however, need to project arcane features like emotions. And they’re all decent enough at it (particularly Compton) except for Nagel, who’s director Tom Nagel’s brother. Poor guy is so wooden, he’s made of teak and came unassembled from IKEA. He’s not helped by the dialog, though, where his character says a variation of, “He’s right. We should leave” about six times. We should leave you here, more like. You stay and you learn how to deliver a line, chum!

So: ClownTown, not a movie for you if clowns already make you uneasy or otherwise unhappy. Although it doesn’t push the boundaries of clown-based horror and terror, the production still sustained fun, enough to offset the somewhat-limited skill set of its actors, writer, and director. 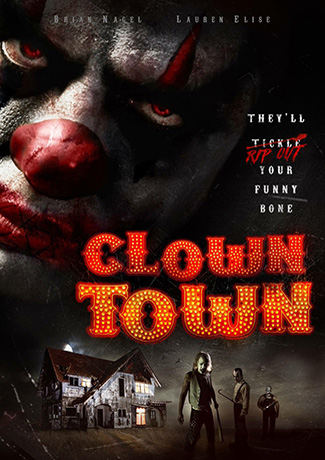