Needs to wake up. Must open his eyes. But he’s not asleep. The guy’s not sleeping; he just doesn’t want to be awake. John’s days aren’t at all a source of motivation, not even of mild excitement. He looks tired. He is tired. Tired of needing so much and of being needed even more. Tired of not being acknowledged by those who need him. And still giving — not giving up: Waking up as yet another anonymous paladin of personal responsibility. He’s there, always there, even when he’s told, often and too much, that he’s not needed anymore. He doesn’t need to be needed. He just want to be sure those around him will do well without his being around.

John (Jack Reynor, as solid as ever, reminding us of his debut days with Lenny Abrahamson) has been parenting his alcoholic mother (Toni Collette, shall I add anything at all?) for more than he could be able to resist — way past his breaking point. This point has been further weakened by the fact that he just can’t get his head around his mother’s accelerating, atrocious addiction. In his mind, there was this energetic, gleeful person who mothered him in his childhood, and then this “animal,” this “monster” who either threatens to swamp in her own vomit or to blow in her own tantrums. She’s both. She can’t be both. But both she does, right when we meet her, one after the other. As to the latter, John films her with his phone so that she can see herself sometime in the future. Actually, this is the irrefutable proof through which he gets her into a too expensive for his own finances rehab program. Driving random prostitutes in a cab at night is not exactly a profitable business in Dublin. So there’ll be other questionable business he’ll need to get into if he wants to keep his mother sober. Putting his life at risk so that she can stand a chance.

But make no mistake, this is no kitchen sink drama — or not a straightforwardly one. Social realism there is in Glassland, but the film centers more on the virtues of the character than on the broken system in which he lives, which, just as the social assistance house he and his mom inhabit, looms as a silent witness in the background. No anger to be found here. The kind of realism you will face is more resembling to some of the early British films that propelled this genre in the late 1950’s and early 60’s, before Margaret Thatcher’s fistful era, than to those that had the ironed-lady as an all-pervading villain. John, in this way, is the kind of derelict with a strong moral compass that populated Ken Loach’s early ventures, for instance.

Yet Irish director and screenwriter Gerard Barrett’s filmmaking looks much more updated than that. His work with the camera resembles more the kind of realism that has taken over UK’s cinema within the past decade, works like Lynne Ramsay’s or Shane Meadow’s. There is a cold rather than an angry lens looking at John. Static. So still a camera that the editing style is almost wraithlike, cutting from empty frames that often leave the action off the shot and letting this emptiness lag. It is as though we were looking at these scenes from the viewpoint of the vacated rooms in which he bursts in . . . or out. Actions framed (and not framed) from linear, perfectly perpendicular angles as the camera uninterestedly lays on a quiet tripod from which shots full of mystery stem, spaces between the dots the viewer will weave while the image takes a break. This, for instance, happens all throughout the scene in which we meet John’s mother, Jean, after he finds her passed out on her bed and amidst her puke, still passing away. He moves, frantically comes and goes. The camera doesn’t. The room knows this routine all too well — has seen it too many times to care. More than the point of view of the empty room, what we get is the first-hand perspective of the irremediable, the imminent, which is the mother of all need.

Just as mystifying is the use of sound, the constant contrast between words and noises and darkness and images and silence: A whole dialectic of the unsaid. This comes off and on until the middle of the film, that mid-piece of the puzzle of mother-child reconciliation in which Jean and John drink together; she, of course, drinks much more, and so finds herself in the mood to talk about the reason behind her compulsion. We have just seen her through John’s eyes for the first time, elated and full of life, dancing to “Tainted Love” very soon before she opens up to tell the way in which her love was tainted — forever.

The common thread that thus threatens to tear them both apart follows an absence, an unremitting absence that hangs behind both backs: The absence of not-having, and hence of needing. For Jean, this translates into a reckless kind of craving that torpidly turns into an addiction. For John it is the fixating feeling that he must save his mother or else lose himself. He cannot quit her. She cannot quit it. None of them can quit. Neither an empty room nor the face of the irremediable, the objectivity the camera portrays is the very shape of absence. What absence looks like. What absence looks for.

Nonetheless, there’s a cheering contrast in John’s life, which manifests in the form of his best friend, Shane (Will Poulter, “The Revenant”), who has a mother he can tell to fuck off, a son with a one-night-stander who won’t let him near the child, but, most importantly, he has the choice to leave them behind. The greatest difference between Shane and John is that where the former has a choice the latter has a need. Shane, for instance, can migrate in search of better opportunities. John knows that leaving is just as well signing his mother’s death sentence and sentencing his brother, Kit (Harry Nagle), to a life of infinite isolation. Needs to stay. Must stay. And stays around.

Because here’s yet another person for John to look after, if only emotionally: His mentally challenged brother, Kit, for whom he drives his cab in circles as a source of entertainment and who, he suspects, is the seed of Jean’s tainted love. During that mid-piece in which Jean finally speaks out (Collette’s performance, as usual, is pitch-perfect, but this four-minute monologue is just astounding): “I don’t hate Kit, I just find it difficult to love him.” That’s all. This is something she can’t do as much as she can’t stop drinking, a cannot-but-I-wish-I-could that irremediably transforms her into an addict. John’s and Kit’s father left Jean after he saw their second child for the first time. He knew what she knew: Neither would be able to love him. And left her with the burden of trying to do so — making the task ever more difficult. She’s left “with no one to dance with” her anymore, whence the “silent friend” that doesn’t judge, that doesn’t dance but makes her dance, if for a little while, comes from. And how much not feeling judged is important in a social structure that has judging as one of its top socialization skills: The reason of which alcoholism is not only a social but also a cultural problem in the UK (and all of Northern Europe), rooted within the very kernel of their traditions . . . that is to say systemic in other words.

It is here in Glassland that Barrett weaves John’s relationships with an intertwining link between “have-not” and “cannot.” Not having, in this context, is a sort of inability, an inability to escape, to find their way out of what they wish to leave, to live and change their life. But no, John just “keep spinning [his] wheels . . . [and] every day’s the same.” No wonder then he’s so tired. No wonder then we meet him in bed, lying with his eyes open.

It is this inability that engenders the characters’ needs, for one can only need when one loves. “You’re breaking my heart . . . The woman I live with is not my mother . . . She’s a stranger . . . I need my mother back” cries John out loud (as before with Collette, this less than two-minute tour de force by Reynor is at once heartening and heartbreaking), reminding his mother what it is like to be loved and, to some extent, reminding her what it means to love. She can’t promise anything, of course. He knows it. Yet he risks it all. He does what he can. Even if that could cost him his life. He will do what he can and that much. That keeps him going. Spinning his wheels. That much he knows. That much he can. 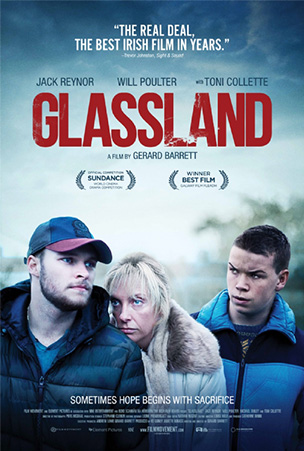