Nature is not a survivor. Nature neither lives nor dies; it is in nature where everything that lives dies, and it is in it that everything that lives fights for survival. Nature is therefore the place of survival, but it is also its witness. For this is no inert space. More a womb than an extension, more an interiority than a latitude, nature is as much a space as it is the very register on which time is recorded and over which it passes; it is the face of time on Earth, on this planet and thus a presence that bears witness as much as it keeps its judgement — it is the ultimate form of transcendence, the purest form of objectivity there is: A presence whose perennial testimony is there for all to see. Nature neither lives nor dies; it rather replicates itself, keeps itself in a continuous state of self-perpetuation and then, when things get too messy, conditions too hostile, extinction too close, it mutates and moves on. Mutation is nature’s true form of survival and means of reproduction; it survives because it keeps copulating with the unknown and with the unknown it begets a new form to perpetuate itself.

This is certainly not the case for human beings. As all organisms hosted by nature, living in it, the best to which a human can aspire is to adapt, to find resources where resources are scarce, and then to go on living. In times of adversity, the best a human can aspire is to survive — basically to not dying. Alejandro González Iñárritu’s latest film, The Revenant, does not rebel against this idea; it rather reveres it through its main character, the real revenant, the resistant apparition and hesitant ghost that Hugh Glass (Leonardo DiCaprio, “The Wolf of Wall Street”) is — a legend inducted into the hall of folklore, the place reserved for all of history’s revenants.

Glass, a poaching authority and power behind Captain Andrew Henry’s (Domhnall Gleeson, “Ex Machina”) captainship over a party of poachers pelting pelts from animals in the wild lands of a recently purchased Louisiana, is one of the few survivors of an ambush led by the Arikara people, whose chief is desperate to find his abducted daughter. Glass is desperate to protect his son, borne to a Pawnee mother killed during an English raid, right in front Glass’ eyes, in the village wherein he spent what seems to be the best years of his life, and so he takes responsibility over the small surviving party (apparently led by Henry) and commands them to part with their raft fearing another ambush would follow should they continue floating that stream. Since Henry’s aware the skilled frontiersman knows best, he finally orders his few remaining men to leave the boat and to continue their way back to the fort on foot. This order is ardently contested by semi-scalped and all-traumatized John Fitzgerald (Tom Hardy, “Mad Max: Fury Road”), a just as skilled poacher and frontiersman who has not credited the captain’s trust because, well, he’s not a trustworthy chap. Yet it is Fitzgerald who the captain trusts when, after Glass has been attacked by a grizzly mother desperate to protect her cubs and is left almost as good as dead (though the bear has it worse), he volunteers to take care of the victim and to take the lead over both Glass’ son, Hawk (Forrest Goodluck), and the goodest of the party, the very young, very naïve, very glabrous Bridger (Will Poulter, “The Maze Runner”), as the three look over Glass’ health. And Henry should have known better. As expectable, Fitzgerald finds his way to leave the man as dead in a shallow grave and dissuades Bridger (after he has taken care of Hawk in front of Glass’ broken eyes) to make their way back to the fort. Glass’ search for a way back, fighting every breath to survive the unsurvivable, is what The Revenant tells with breathtaking beauty.

Although the plotline may seem a little tortuous, this may be credited more to my writing than to what it really is. The story couldn’t be simpler, and it is because it is so simple that the film succeeds. I have to say it, for me, very few things have been better for Alejandro González Iñárritu’s artistry than his very fortunate parting with Guillermo Arriaga. The screenwriter’s overwhelming presence (as overwhelming as inflated is his ego) tended to harm the director’s sensitivity — doing to his films what perhaps I just did with the synopsis. I first became aware of Iñárritu’s genuine sensitivity when I first saw “Biutiful,” his first project without Arriaga. Although this is his less well-received film to date, it was for me a rite of passage towards artistic maturity, and, in my view, he passed it with flying flags. Finally, rather than having to break the emotional core into the messy spiral of the narrative artifice stubbornly constructed by Arriaga (under the guise of a clockwork crossroad), we get in “Biutiful” to concentrate on the devouring emotions of its main character and the way in which they play to create a devouring tension with those of the other characters around him. Finally we got to see that the several variations of hopelessness taken to its limit was a central preoccupation for the director and not the main contribution of the screenwriter.

The Revenant takes hopelessness to new limits and plays yet another variation that, if you are into the director’s work, still sounds fresh. This is largely due to the fact that Iñárritu has decided to keep good company with another collaborator who has injected his films with a depth hardly achievable by a single man. The work of Emmanuel Lubezki seems intrinsically ingrained in the director’s view. And this is strange, since they only had made one film together (“Birdman”) and Iñárritu’s regular cinematographer before “El Chivo,” Rodrigo Prieto, was an extraordinary collaborator in his own right. This time, however, it would be safe to say that Lubezki is right on his way to nail his third Academy Award in a row (“Gravity” and “Birdman” being the first two). He should, as this is, to date, his finest work — hardly a surprise, as the sceneries he’s in are like the Holy Grail for great photography. This kind of setting can make a good cinematographer out of a mediocre one; so no wonder it makes of a great one an almost transcendent image-maker. Please note what he does at a point in which Glass is left gasping at the camera and what this does to the lens; his little gesture is proof of his astounding artistic instincts.

And these impactful images are further echoed by the superb score of Ryuichi Sakamoto, a first-time collaborator. The composer made us forget how much we missed Gustavo Santaolalla during Antonio Sanchez’s drumming sessions, which were about the most wonderfully annoying pieces of “Birdman.” Sakamoto took his chords to the minimum, creating fainting sounds travelling from slow vibrations just resisting their fate to finally fade away. The score’s so good it makes us forget as well of the poor dialogues (although Hardy’s mumbling also helps). Fortunately, this is the kind of movie that can dispense with words and thus the dialogues are more an instrument than anything else. This is the kind of film that goes beyond the material on which it is based — the average novel of Michael Punke.

Yet what Iñárritu decided to seize from the written material was the best part, the way in which these kind of novels (that have most recently seen works of great literary quality as well as of great editorial success such as Joseph Boyden’s The Orenda) approach history: In its natural habitat, and thus in all its brutality — most likely the way it happened . . . the way it still does.

When it comes to it, history is the sum of its survivors, and thus the account of those who were willing to survive. The struggle of existence (as Darwin would have it) was prettied up in order to make it digestible to civilization, or to civilized individuals, or to those who presumably read history. For us, urbanized, spoiled people, this struggle for existence has been exchanged for an effort to make a living. But when what is at stake is survival itself, all humans have an even standing, and the death of one means the life of another. Fate, the fate of this or that character, of this or that person, is completely irrelevant at the eyes of nature, looking at every death, at every life with its majestic, transcendental indifference. Fate was as much by history invented as it was by myth mandated — these two more or less the same when seen in the nude. All attempts to create a naturalistic history, a historiography, to naturalize it in the efforts to make it a scientific endeavor, are in this way ridiculous. Death is the only fate that nature knows for each and every organism it has harbored since its very dawn.

And especial mention should be allotted here to the cast of The Revenant, and particularly to DiCaprio’s superior performance — and I say this aware of my own distaste for this actor. Here, however, I should spare no adjectives to describe the way he inhabits the character with the same conviction with which he embodies his wounds (and a big kudos to Jacqueline West and to the whole makeup department). DiCaprio is able to render a most fluid interaction between the scars, the gashes, the scrapes of his body and those of his psyche, his spirit, his soul: His breath is almost a threshold between his body and his soul through which both grief and will connect. His Glass sees the defacement of the historical man to look at the eternal reflection of the man in nature.

The story of how the West was won, how the North was taken, is one of cruelty, violence and dispossession. The history we see in The Revenant is raw: Gruesome, gory, gutty. Likely the revenant stories of those who were slain and whose voices were silenced. The history of survival we thus learn is one dependent on fighting, one that many of us, who have inherited the privilege of having very low stakes for our mistakes, have forgotten. But in the eyes of Iñárritu’s (and likely Lubezki’s) nature, Nature, the nature that humbles history, dwarves it and takes its capitalization away, only those who breathe and fight and fight till their last breath will be there to see the final instant of someone else’s fate. 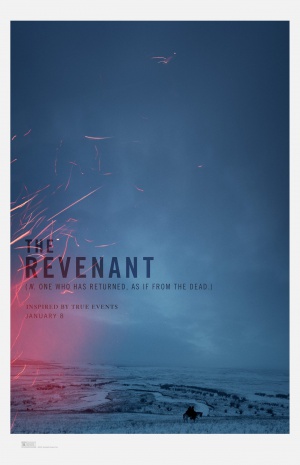