Condensing a love story into a mere twelve minutes of screen time poses some considerable challenges for the filmmakers and actors, but it can make for very lean storytelling devoid of any fat. That’s the case with Stutterer, which manages to cover the main bases of the classic romantic movie formula within its very tight running time and yet still finds space to establish a beating heart.

Allowing writer/director Benjamin Cleary to handle the juggling of requisite plot pieces is protagonist Greenwood (Matthew Needham, “Casualty” TV series), whose titular issues with stuttering internalize the conflict. Needham does a fine job of depicting the frustration and loneliness of the person who can’t get even a few words out without great difficulty and Cleary smartly employs a near-constant voiceover to give Greenwood an opportunity to speak freely.

We don’t know much else about Greenwood, other than that he fears social situations due to his disability and finds his only semi-comfortable interactions with his elderly, seemingly vacant father to be decidedly one-sided. So he retreats to his computer, where he’s developed an online chat relationship with Ellie (Chloe Pirrie, “Blood Cells”).

It’s tough to imagine a love story working when the characters haven’t even shared the screen yet, especially since the movie is positioned entirely from Greenwood’s perspective. The chances to generate romantic chemistry are few when working with only text. But Cleary guides the story steadily and sweetly and keeps the focus so tight that it’s easy to hope for our hero to find some semblance of happiness, some connection that shakes him out of these doldrums.

At one point, he witnesses a couple arguing at a bus stop and tries to intervene when it looks like the quarrel is going to turn violent. We’re not sure what Greenwood is hoping to accomplish, but the scene cuts right then and the next shot shows our likable protagonist with a band-aid over his nose. It’s a nice, innocent image that defines Greenwood. He’s a nice guy, a good person, but he barely interacts with the world and when he steps up, he gets punched for it. A little moment like that also keeps the tone somewhat light without actually skirting into comic territory.

Getting us on Greenwood’s side is Cleary’s main goal because once he has us there, then we’re invested in the character’s happiness and therefore the love story. The limitations of a short running time inspire suggestion and subtlety, two elements that are pleasantly welcome in something as cinematically familiar as an awkward romance. Cleary also puts us inside Greenwood’s headspace quite convincingly, so that the internal conflict and personal stakes at play feel increasingly meaningful.

In the end, however, the impact of Stutterer can only be felt so deep since it tells its simple story in a pretty traditional, familiar manner. It doesn’t really extend beyond mere cuteness, but it’s a charmer in that regard. Cleary seems a confident filmmaker already and he collaborates well with Needham, the two developing their protagonist quite clearly and concisely and finding small, efficient ways to depict the challenges he faces on a daily basis. This is like a sweet little treat, its resonance perhaps fleeting, but its taste nicely satisfying in the moment. 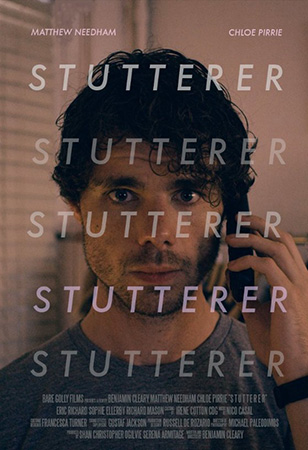