In junior high school, my good friend Sara would show me “fast-forward” versions of films — she would sit me down and show me her favorite movies, speeding through the parts that were too drawn-out and inconsequential, with the purpose of getting to the good stuff faster.

The Forest, the first mainstream horror movie of 2016, begins with just this type of “fast-forwarding” in order to “get to the good stuff.”

Having recently been informed that her identical twin sister, Jess, has gone missing in Japan, Sara Price (both girls played by Natalie Dormer, “The Hunger Games: Mockingjay – Part 2”) becomes determined to find her. She shrugs off any professional advice from authorities and any offers of help from her husband, growing increasingly convinced that her sister, reported to have disappeared into Japan’s “Suicide Forest,” is alive, yet lost, and needs her help.

She arrives in Japan and is warned about the dangers of the Aokigahara forest — known as the “Sea of Trees,” the forest is incredibly dense, standing at the foot of Mt. Fuji and resting above a network of ice caves. A real location, and the site of hundreds of suicides, the Aokigahara forest is believed to be home to malevolent demons (who lure people into the forest, confusing them with voices and visions, causing them to become irretrievably lost), and yurei, lost souls filled with sadness and anger seeking vengeance for wrongs in their mortal lives. Despite the warnings of every Japanese man and woman with whom she comes into contact, Sara pushes on, visiting the school where her sister taught, speaking with her students, and searching her apartment for clues about her state of mind. She boards a train for the Aokigahara forest, and meets Aiden (Taylor Kinney, “Rock the Kasbah”) a travel reporter who convinces a Japanese guide friend of his to take her along on their next hike through the forest.

The guide, Michi (Yukiyoshi Ozawa, “Rurouni Kenshin: The Legend Ends”), tells Sara that he walks through the forest regularly to search for the remains of men and women who have committed suicide, or have gotten lost in the trees succumbing to the elements. He stresses the importance of searching only in the daytime, and tells Sara that anything bad she sees is only in her head, and isn’t real. As in every encounter she’s had to this point, Sara disregards what he tells her, and decides she wants to take the lead, drawing the small group down a new path that leads them to a tent she recognizes as her sister’s. Convinced Jess is nearby, she refuses to leave, and she and Aiden remain in the forest overnight, faced with those visions and voices and terrors they were repeatedly and emphatically warned of.

Written by Nick Antosca, Sarah Cornwell and Ben Ketai, The Forest is an exercise in watching an arrogant foreigner tramp her way into another country’s historical landmark, convinced she knows better than those native to the area. Granted, Dormer’s Sara is intent on saving her sister’s life, but she comes across as rude, ungrateful, and completely condescending to the Japanese men and women who try to keep her from making a terrible mistake. She is the typical horror-movie-girl who boldly, and foolishly, marches into the dark room where everyone — including all of the characters — knows a madman lurks. Despite how often she tells you she wants to save her sister, Sara speaks of Jess very coldly — she describes her as always needing to be bailed out of trouble, as someone dealing with her own demons, as the one who looks at the dark side of life. She tells Aiden that Jess tried to commit suicide twice before, and we’re shown that Jess takes anti-anxiety medication, but at no point does Sara seem genuinely concerned for Jess’s well-being or state of mind. She’s treated as an annoying errand interrupting Sara’s otherwise upscale life. As a result, it’s difficult to sympathize with Sara’s insistence that she can “sense” that her twin is still alive and in need of help. Moreover, her treatment and disregard for everyone who’s trying to convince her that the Aokigahara forest is a very real and very dangerous threat makes you feel that she deserves what’s likely coming to her.

As a horror film, The Forest is short on frights, relying principally on loud noises that precede rush-at-you/in-your-face jumps scattered throughout the narrative, seemingly as ways to remind the viewer that the movie is supposed to be scary. The writing, as mentioned already, is rushed in the beginning, but it doesn’t get appreciably better once it settles from condensed conflict set-up to main character in danger essentials. Additionally, the conversations had between most characters are stiff, flat, and, at times, laughable; for example, when showing Aiden a cellphone picture of her missing twin, Sara says, “Same, right?” and Aiden replies, “Identical.” Finally, it’s incredibly difficult to suspend disbelief (an accepted element of watching horror) when Sara seems to have purchased the world’s one-and-only never-ending cellphone battery — her constant use of the cellphone flashlight is incredibly distracting, putting more focus on the unlikelihood of still having power after two days in the forest than on the tension that should be developed by a character exploring a dark cave.

Overall, while the movie itself isn’t necessarily boring, it creates more frustration than fright. The Forest, like its protagonist, doesn’t respect the history of a real place in the world; instead, it cheapens a somber location into another disappointing supernatural horror movie that will soon be gone from theaters and forgotten in minds. 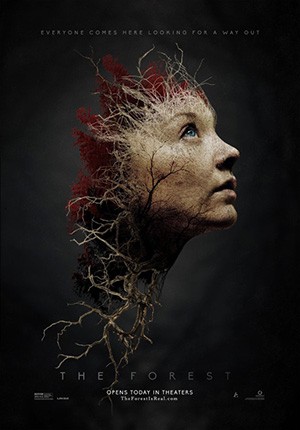