Keishi Ohtomo’s new film, Rurouni Kenshin: The Legend Ends, is the final in the live-action trilogy based on Nobuhiro Watsuki’s best selling manga series. In it, Shishio (Tatsuya Fujiwara, “The Secret World of Arrietty”) is on a mission of chaos and so he sets sail in his terrifying ironclad battleship to bring down the Meiji government carrying Kaoru (Emi Takei, “For Love’s Sake”) with him. In order to stop Shishio in his tracks and retrieve his friend, Himura Kenshin (Takeru Satô, “The Liar and His Lover”) enlists his former mentor to help him master the art of the final technique (Flying Heaven Honorable Sword Style) and save the day.

Kenshin is a tough character of undeniable strength and will. After all, he’s left his loved ones and all he knows behind in order to devote himself to “the cause of peace.” He soon finds out, however, that he still has a few lessons to learn. His mentor, Hiko Seijuro (Masaharu Fukuyama, “Like Father, Like Son”) teaches him the importance of being able to win his battles without killing his opponents, a task that seems a bit of a tall order quite frankly (especially if you are familiar with the period in which this takes place). He also learns that he has to find “the will to live” in order to become the most successful fighter he can be. He’ll need this knowledge for sure, but the lack of any real action makes one wish he learned his lesson in half the time.

When the time finally comes though, Satô, a beautiful elfin actor, fights his way through each battle he finds himself in with the grace of a ballerina. In fact the whole production is a stunning and balletic piece which simultaneously manages to maintain a horrific dramatic presence alongside said beauty. One such fight scene as an example comprises of a breath-taking, fluid shot in which a character punches his way through a tower of boxes until they reach the floor, and then in the next moment we are taken back to Shishio’s dirtied, bloodied and bandaged face thirsting for more violence.

It is this realization of well choreographed sword fights and bodily fluids splayed upon the screen that takes Rurouni Kenshin: The Legend Ends successfully from the paper of the manga page to the reality of the big screen. As each character does battle they become sweaty, dirty and bruised. There’s no “après-fight” perfect hair for anyone in this story. You really get a sense of how much these characters are being physically tested throughout their journey.

Yet, in spite of how impressive the fight scenes are, the grand finale fight goes on for far too long and could do without the continuous annoying grunting from Shishio. The battles are also disappointingly a “male only” zone. Women’s only purpose seems to be to nurse the brave warriors back to health, or to help support them (literally) on their way home from war. At one point it looks like things are about to change when a female character steps out into the arena only to “get in the way” of Shishio’s sword (Shishio goes through her with it in order to try and kill his adversary standing behind her). On her death bed she states that she’s happy it’s happened as it means she’s finally been of use in a fight. Even the women in the film are crying out for a piece of the action and getting in the way to be needlessly killed is the best deal that they can get!

The first two chapters in the Rurouni Kenshin trilogy — “Rurouni Kenshin” and “Rurouni Kenshin: Kyoto Inferno” — have been a phenomenal success. They’ve gone beyond the expectations of the devoted manga fans (even though they do not remain wholly faithful to the source) and their popularity has swept through Japan with unparalleled speed. With that in mind, although it has its flaws, Rurouni Kenshin: The Legend Ends is destined for success. It also stands tall as a well-rounded film in its own right. 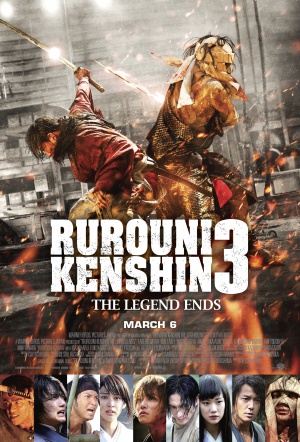