Cheese. Beloved by Wallace and Gromit; source of comedic consternation for George Clooney in “Burn After Reading;” key ingredient for Remy in “Ratatouille.” Hardly the most disturbing food to be portrayed on screen. Nonetheless, writer-director Darren Darnborough succeeds in making his short film about cheese sinister and sexy in equal measure, as well as exquisitely designed and strikingly beautiful.

Beauty and seductiveness permeate the dark fairy tale that is Stefano Formaggio. Shot in the gorgeous Californian town of Carmel-on-the-Sea, the film is set in an idyllic yet contemporary village, the location only suggested by the European currency exchanged between its inhabitants. All the buildings are picturesque, from the houses to the workshops and from the marketplace to a delightful little café that could have come straight out of a tourist brochure. The only thing more beautiful than the location is the people, principally the stunning Hawaiian florist Jasmine (Alice Greczyn, “Sex Drive”), whose interest in the outrageously handsome Italian cheesemaker Stefano (Pasquale Cassalia, “Jet Set”) is not limited to his delicious product. Jasmine’s extremely pregnant sister Olivia (Mandy Amano, “Crank: High Voltage”) is similarly radiant, and even minor characters such as Jasmine’s friends Siobhan (Amelia Jackson-Gray, “Point Mugu”) and Asiana (Mary Tran) are equally dazzling.

Beauty pervades other details as well, such as the deliberately paced montage that opens the film, cutting from the stylish shoes of Stefano’s female clientele to the exquisitely packaged cheeses that he sells. The montage also includes people’s homes and clothes, as well as Stefano’s traditional cheesemaking equipment, the progression of shots along the cheese production line mirrored by similar shots of the customer line in front of Stefano’s stall. Jasmine and Olivia’s apartment as well as the former’s flower shop is similarly elegant, and a scene in which Jasmine prepares multiple customers’ orders uses accelerated action to emphasize her own efficiency and grace — Jasmine remains beautiful even when moving so quickly she becomes a multi-limbed being. A harp player provides music over the early events, which would be incongruous except that the presence of a local musician providing just the right musical accompaniment adds to the idyllic charm of the village and the film as a whole.

As is often the case in a fairy tale, there is more than meets the eye, and the secrets behind the charming idyll become steadily apparent as Stefano Formaggio progresses. Darnborough largely opts for suggestion over explication, hinting rather than displaying and leaving much to the viewer’s imagination as events unfold. Why does Stefano say that? Why does he have these particular interests? Why that sudden change in mood, both for characters and film as a whole? These questions are answered, but the answers are all the more satisfying because of the careful pacing that runs throughout the film, allowing the viewer to spend sufficient time with the characters.

The characters are themselves a significant strength of the film. Jasmine could easily have been a shallow, spoiled pretty girl only interested in getting what she wants, which would be irritating. Pleasantly, Darnborough allows her breadth and Greczyn is wholly convincing as a woman of ambition who nonetheless understands responsibility, as evidenced by her conscientiousness towards Olivia. The delightful café mentioned earlier is the site for an illuminating date between her and Stefano, where we learn much about Jasmine but intriguingly little about Stefano. Small wonder she is interested — Stefano is not only handsome, charming and talented, but has the right element of mystery to prompt our mutual curiosity, especially when a turn in the conversation seems to mute his interest.

Divided almost evenly by day and night, Darnborough and director of photography Hallgrim Haug make great use of light, beginning with bright sunlight over the early sequences before fading to twilight over the course of Jasmine and Stefano’s date. Darker events take place at night: Ironically it is in darkness that revelations appear. To reveal more would spoil the surprise (which is in no way cheesy), but suffice it to say that Stefano Formaggio entices the viewer from its opening shots, and leaves them with a satisfied, if slightly creeped-out, aftertaste. 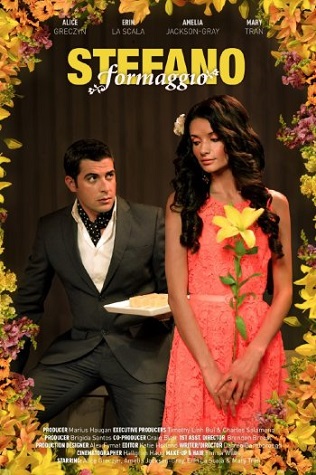