There’s plenty to like about director Daniel Espinosa’s (“Safe House”) latest politically-driven crime thriller, Child 44. There’s a strict hierarchy of Iron Curtain power, no holds barred bloodshed, costumes that rival the best period pieces and, most importantly, a mesmerizing story (based off of Tom Rob Smith’s novel bearing the same name). There’s plenty of star power lurking about the shadows too — from Tom Hardy (“Locke”) to Gary Oldman (“Dawn of the Planet of the Apes”) to Noomi Rapace (“The Drop”) to Joel Kinnaman (“RoboCop”).

And while outwardly Child 44 gives the appearance of just being a wartime drama about the tensions in the Russian secret service, it delves much deeper than that. Finely threaded throughout the maze of political power-brokering and backstabbing is an intricately laid out murderous subplot.

It begins in a U.S.S.R. orphanage before World War II, where a young boy is given the masculine name Leo by a Russian militarist. As a man, Leo (last name Demidov, portrayed by Hardy) is then shown at the end of the Great War after his troops have taken over a German stronghold. He is pictured holding the Red Army flag over the city, and soon finds himself a war hero. After the war, Leo is a commanding officer in the MGB, weeding out traitors sympathetic to British or capitalist ideals. He proves to be a fierce, committed officer, but he retains a heart, unlike the man he calls a brother, Vasili Nikitin (Kinnaman), who’s prone to heinous violence.

When Leo’s wartime brother, Alexei Andreyev (Fares Fares, “Zero Dark Thirty”), discovers that his son has been brutally murdered, Leo immediately takes an interest in the case, because the Soviet mantra naively reads, “There is no crime in paradise.” However, Leo’s investigation soon becomes obstructed because Leo’s wife, Raisa (Rapace), is named on a list of potential traitors and Leo is forced to investigate her. And thus, a rapid series of events ensues, beginning with Leo and Raisa’s swift exile to an industrial outpost when he refuses to denounce his wife. But even there Leo stays on the case, learning that 43 children have been murdered, concluding that the number should really be 44 because of Alexei’s son. Hoping to secretly solve the case he enlists the help of General Timur Nesterov (Oldman), and soon finds they’re in Vasili’s crosshairs . . .

Although the mystery itself is interesting and nicely presented, it isn’t the toughest to crack as a spectator. The tension surrounding it, however, is one of the strongest attributes of Espinosa’s Child 44. The stakes are raised ever higher as each new layer is pulled back and another layer of corruption and abuse is exposed. Impressively, it’s done in a manner that doesn’t thoroughly weigh the picture down with intra-Russian conflicts. Espinosa strikes a workable balance between creative arc and the inclusion of period-related detail, illuminating the communal mindset of the time by giving focus to POWs that survived German camps, rural farmers sentenced to the gulags and brawny soldiers with political ambitions when pertinent to the story.

He’s failed by his actors when their manufactured Russian accents slip to the level of distracting (Tom Hardy’s stays pretty even keel; Oldman’s is pretty messy). Several characters could have been improved upon as well. Oldman’s part is criminally minor, and Kinnaman plays a formidable antagonist, so it’s rather unfortunate that it’s not much different from a typical Russian bad guy penciled into dozens of similarly themed films. Hardy is quite good conveying a proud man frustrated from doing what is right, but his backstory is rushed and it would have been nice to see how events mentioned in his youth shaped his moral compass. Accompanying these performances are perfectly gray, shadowy frames that capture the destitution, the restlessness of Stalin’s perfect creation, although I questioned on more than one occasion whether it was taking place in the U.S.S.R.

Even with these imperfections, the drama provides enough spark to keep Child 44 from smoldering out. It may not burn as brightly or as hotly it could (or should) have, but then again nothing in post-WWII Soviet Union delivered what it promised. 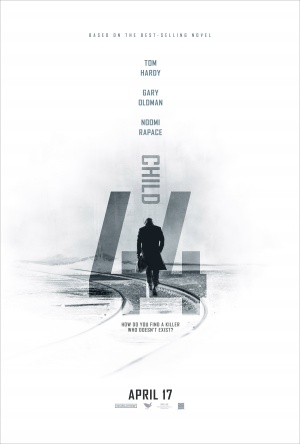